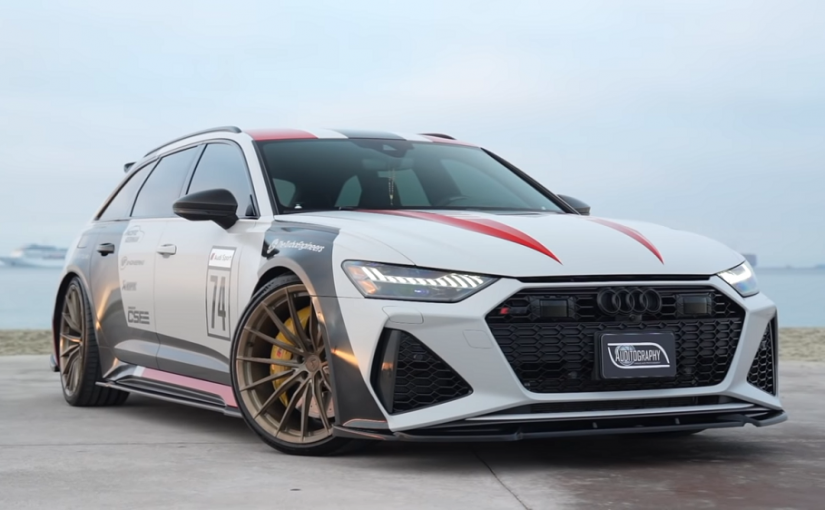 A slew of wicked RS6 Avant builds have appeared since the weapons-grade wagon debuted. This might be the quickest yet.

Along with Rule 34, Betteridge’s law of headlines is one of my favorite internet maxims. To refresh your memory, it states: “Any headline that ends in a question mark can be answered by the word no.” And while my experience has found it to be spookily accurate, this recent video from our friends over at Auditography make me think it might not be infallible. Because the title of this video asks whether this weapons-grade Audi RS6 Avant is the world’s fastest. And with a blistering zero-to-60 time of 2.7 seconds? The answer could very well be yes.

Built as a collaboration between Pacific German and VF Engineering, this one-of-one monster is packing a laundry list of performance upgrades. Most notably, the factory snails have been swapped for a pair of fat TTE turbos, the ECU has been treated to a Stage 3 upgrade from VF Engineering,  and upgraded intercoolers  come courtesy of the frosty folks over at CSF Racing. According to the video, that means this vicious longroof is good for a whopping 1,000-plus horsepower and earth-twisting 750 lb-ft of torque.

Keep your foot buried, and all that poke is said to translate to a top speed north of 210 mph. But thanks to a body kit from Maxton Design, a slick red, white and black  livery, and bespoke 22-inch brushed bronze wheels, this RS6 Avant looks the business even if it’s standing still. Everything under the hood looks quite tidy as well, and unless you’re an accomplished Audi mechanic, you might think this baby remained just as Ingolstadt intended. Given that my mechanical exploits have gone over about as well as a fork in a microwave, the details are lost on me.

As to the claim that this is the fasted example of Audi’s luxury longroof on the planet, however, I can make a more knowledgeable assessment. Because I’ve been following the news on the RS6 Avant since long before they started turning up wrecked, and while I’ve seen several red-hot examples, this does seem to outshine them. ABT-Sportline’s version is good for 740 horsepower and a 3.2 second zero to 60 time, this 900-horsepower model is said to be just shy of the three-second mark, and even the mighty MTM Stage 4 project — with its insane 1,001 and 921 lb-ft of torque — is said to hit 60 in 2.8 seconds. So enjoy the video — and if you find a faster Audi RS6 Avant hit me up!