On Saturday May 18, 2013, Jody Scheckter will host a sumptuous banquet, while offering a rare opportunity to hear him speak about his incredible racing career and view his own collection of the cars he drove – as seen in the February issue of Motor Sport.

The evening, held in association with Motor Sport, will take place in the new state-of-the-art Saracens Rugby Stadium. The multi-course feast will be sourced from Jodyâ€™s award-winning Laverstoke Park organic farm. Tickets are offered at a discounted rate for subscribers.

A selection of Laverstoke Park Farm canapÃ©s:Â â€œWeâ€™ll be offering a selection of biltong,â€ says Jody. â€œWe make the biltong I always dreamed about â€“ and it does not contain preservatives or colourings. It is cured overnight and then slowly dried, giving its unique flavour. Early South African settlers used these methods to preserve their meats naturally.â€

Buffalo mozzarella with fresh tomato and basil: Served with a selection of our home-grown baby salad leaves and vegetable cruditÃ©s. â€œThe equipment that makes our mozzarella comes from Modena near the Ferrari factory. Michelin star chef Angela Hartnett rated our mozzarella â€œ10 out of 10â€ saying it was â€œfresher and creamier than the finest Italianâ€. Itâ€™s so good I took some to Ferrari a couple of years ago and they loved it. My dream is to export my mozzarella to Italyâ€¦â€

Award winning pan-fried buffalo fillet: â€œBuffalo meat is lower in fat and cholesterol than beef. It beats normal fillet for taste and our dry-aged buffalo fillet was awarded â€˜The Best Specialityâ€™ food in England, on top of the highest award of three gold stars at the Great Taste Awards. We have our own herd of more than 2000 water buffalo.â€

Mario Andretti was less lucky in the Daytona 24 Hours than he was at Sebring where he won three times in 1967, â€˜70 and â€™72. Andretti started eight long-distance races at Daytona but never won over 24 hours, scoring his only win in 1972 with Jacky Ickx aboard a Ferrari 312PB when the race was shortened, in the FIAâ€™s wisdom, to just six hours.

In 1972 the race was shortened to six hours by an FIA edict aimed at reducing all long-distance races, save Le Mans, to either six hours or 1000km in duration. Ferrari produced a new 312PB sports car that was lower and lighter than the previous year’s car and Andretti qualified on the pole, but his car lapsed onto eleven cylinders in the early going and Ickx and he began to fade.

Numerous problems afflicted the other frontrunners however, and Mario and Ickx came through to win, taking the lead from teammates Tim Schenken and Ronnie Peterson with just fifteen minutes to go when Schenken had to pit to replace a punctured tyre.

“We dropped a cylinder at the start,” Mario recalls. “An injector went afoul. They tried to fix it, but we ran the whole way. We were running third, fourth, or fifth, and toward the end they were coming back to us. We were running second to Peterson and Schenken but they lost fourth gear, then cut a tyre near the end, and I passed them and won.”

At Sebring the following month Andretti once again put his Ferrari 312PB on the pole and led the opening laps only to run into a series of problems. Mario and Ickx lost time, first with a cut tyre, then a broken battery cable and finally an oil leak, but were able to come back in style, beating teammates Schenken and Peterson once again. It was Mario’s third win at Sebring in six years.

“I really enjoyed those races with Ickx,” Mario says. “Jacky was one of the best teammates I ever had. He would let me qualify, which I loved to do, and physically, we were about the same size. His arms were longer than mine. I used to set up the car to suit me, and he would never change a thing.”

Mario and Ickx won again at the Brands Hatch 1000Kms in April with Peterson and Schenken finishing second again, making it four 1-2s in a row for Ferrariâ€™s sports car team.

Andretti didnâ€™t return to the Daytona 24 Hours for twelve years. In 1984 he teamed up with his son Michael, who was only twenty-one at the time, to race Porscheâ€™s first 962 which was based on the 956 but designed to IMSA specs with more protection for the driversâ€™ feet. Mario put the car on the pole and Michael and he led the race until the gearbox roasted itself.

“The 962 was a single turbo for IMSA in the States,” Mario recounts. “That was a hell of a car. It was born correctly. The first engine was still the air-cooled six-cylinder and to qualify we closed the air intake underneath the car. People didn’t realise how much quicker you could go in qualifying trim with it plugged-up. That’s what prompted Porsche to go to a water-cooled engine because they realised they were losing so much downforce.”

The turbo in the prototype 962 was located right on top of the gearbox and wasn’t shielded anywhere near enough. “We cooked the damn synchronisers,” Mario laments. “They unfairly blamed Michael because it was during one of his stints. They said he was too rough on the gearbox, too young and inexperienced. Michael was flying. He was as quick as anyone, quicker in fact.”

Mario and Michael next ran the Daytona 24 Hours in 1989, sharing a 962 owned by Al Holbert who had been killed in an airplane crash the previous autumn. The car was prepared by Holbertâ€™s former crew chief Kevin Doran and run by Jim Busbyâ€™s team but about a third of the way into the race the Porscheâ€™s brakes failed.

Andrettiâ€™s final Daytona 24 Hours came two years later, sharing a rebodied Porsche 962C, run by Jochen Dauer, with Michael and younger son Jeff. A second Dauer Porsche was entered for the Unser family but the team wasnâ€™t up to fielding two cars for such high profile competitors. The Unsersâ€™ car dropped out in the middle of the night while Mario and Michael recovered from losing 20 laps because of some early electrical problems to take the lead early on Sunday morning before the gearbox broke. They went far enough however to be classified fifth, 56 laps behind the winning Joest 962.

â€œThat was disappointing because we drove so hard through the night,â€ Mario recalls. â€œIt was great to share the car with Michael and Jeff. Jeff did a great job, running just as fast as Michael and me, and we were on our way to pulling off a great comeback win. But it wasnâ€™t to be.â€

So goes the grind of long-distance racing, particularly at Daytona were the infield section is rough and bumpy while the banking puts plenty of loads through the chassis and drivetrain. Nor does it help that more than half the race is run in the dark. Itâ€™s as tough as they come.

Madonna di Campiglio (Italy) â€“ Today the 23rd edition of the Wrooom Press Ski Meeting at Madonna di Campiglio drew to a close with the traditional ski and kart races reserved for F1 drivers and MotoGP riders, which provided an exciting and enjoyable evening for the spectators present in the famous ski resort in the heart of the Trentino Dolomites. 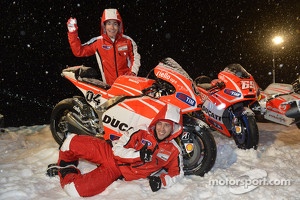 To celebrate this edition of Wrooom and as a mark of gratitude and recognition for the Dolomites range of mountains, Ducati decided to create a special livery of the Multistrada 1200, by using the â€œPikes Peakâ€ sports model as a basis and transforming it into an exclusive and attractive â€œDolomitesâ€™ Peakâ€ version.

The bike was unveiled by the Ducati Team riders shortly before the ski race, 2100 metres up the mountain, with a spectacular view of the Dolomites as a backdrop, and the sun, blue sky and lots of snow making the atmosphere even more fascinating than usual.

The bike will remain a unique, one-off version, even though the interest that the gorgeous livery aroused far exceeded expectations. 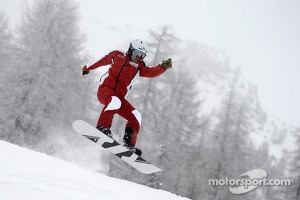 The snowboard downhill race was dominated by Andrea Dovizioso, the Italian demonstrating his ability on the snow, and he finished ahead of his team manager Vittoriano Guareschi.

Paolo Ciabatti, the new Ducati MotoGP Project Director, finished a good fifth place in the ski race, which was won by Giancarlo Fisichella.

In the evening the attention turned to Madonna di Campiglioâ€™s frozen lake for an exciting end to the Wrooom 2013 week.

At the chequered flag the all-F1 podium saw Alonso take the win from Fisichella and Massa, while Dovizioso (fourth), Hayden (fifth) and Iannone (seventh) all had good races and contributed to the spectacle.

With the conclusion of the Wroom 2013 Press Ski Meeting, the Ducati Team and the Pramac Racing Team now prepare to start testing for the 2013 MotoGP season, at Sepang in February and Jerez de la Frontera in March, followed by the opening round of the championship in Qatar on April 7.

Special thanks to:
motorsport.com

This month the team sat down with Richard Attwood, winner of the Le Mans 24 Hours in 1970.

Regular listeners will know how entertaining Richard can be after Ed’s evening with him and David Piper. Nigel also commented afterwards that he has rarely known a racing driver with such incredible recall. For fans of the Porsche 917, Richard’s experiences of the car’s difficult early days and his Le Mans win with Hans Herrmann will be particularly interesting. The historians among you should enjoy this one.

Vic Elford on the Targa Florio

Even in the 1970s, the Targa Florio was an anachronism. Held around the twisting roads of Sicily, it was a major part of the sports car championship for many years. Cars set off at 15 second intervals and raced around the (for most of its history) 45 mile circuit that ran through the hills and towns of the island.

The 1972 race seen in this video was won by Ferrari drivers Arturo Merzario and Sandro Munari. The Scuderia dominated the sports car season that year with the 312PB, winning every round except Le Mans â€“ which they didn’t even enter, fearing their F1-derived engines wouldn’t last the distance. Munari was an interesting addition to the team for the Targa. A rally driver â€“ and later a champion for Lancia â€“ he knew the area like the back of his hand and his talents combined with the aggressive Merzario made for an effective pairing.

Vic Elford won the event in 1968, sharing a Porsche 907 with Umberto Maglioli. ‘Quick Vic’ became a hero to many after the victory, having lost 18 minutes on the first lap after a tyre failure. One of the most intriguing parts of the film is his description of Helmut Marko’s worries about the race and subsequent lap record. After making headlines for all the wrong reasons recently, it’s a great reminder that he was capable of a banzai performance in his day.

This video is an excerpt from the film The Speed Merchants, a documentary following the 1972 sports car season. It’s well worth a watch.