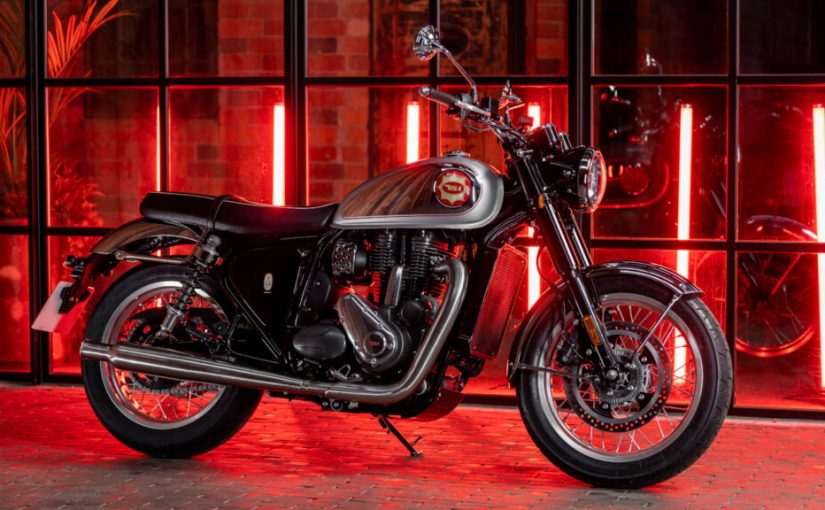 One of the most famous brands in British motorcycling returns with the new 2022 BSA Gold Star unveiled as a modern interpretation of the classic bike.

The new BSA Gold Star is powered by a 652cc liquid-cooled single cylinder engine with dual overhead camshafts, and some classic fins to resemble the air-cooled version used in the originals. It puts out 45 hp with peak torque of 55Nm to develop pull from as low as 1800rpm.

You get a flat seat with pillion strap, and a twin-pod instrument dash. While the needles for the analogue speedo and tachometer feature the same reverse sweep function as the Smiths examples on the original bikes, the new version also has an LCD multi-function display.

The tank is inspired by the M24 and DB34 Gold Star models with chrome on the sides, an offset fuel filler cap, and pinstriping. Along with the classic BSA logo

At the rear are LED lights which are designed to resemble the original Lucas lamps, along with the signature rear fender.

The new 2022 BSA Gold Star will be available in Insignia Red, Dawn Silver, Midnight Black or Highland Green. And there will also be a special Legacy Edition, which comes in a special Silver Sheen livery. Inspired by the Gold Stars of the past, it also gets chrome-finished mudguards, mirrors and levers. The engine covers are polished, there’s white beading on the seats and various parts get either chromed or gloass black finishes to set it apart.

“For us, the new BSA Gold Star is not just a motorcycle, but an emotion and we pursued the journey of bringing BSA back with utmost passion. To stay authentic to its roots, the new Gold Star was designed and engineered in the UK. The new motorcycle incorporates BSA’s DNA and stays a Gold Star that is true to its lineage.” Mr Ashish Singh Joshi, Director of BSA Company Ltd.

As you’d imagine from a retro naked bike, the seat height should be manageable for most people at 780mm, and the wet weight of 213kg is pretty reasonable. The fuel tank has a 12 litre capacity, and despite the classic looks of the Gold Star, it does come with dual-channel ABS, an engine immobiliser, and Assist and Slipper Clutch, a 12V socket for heated clothing, and even a handlebar-mounted USB charger.

“BSA reigned supreme during the golden era of British motorcycles, renowned for their spirit and impeccable workmanship. We’re incredibly honoured to be showcasing a new model that captures the DNA of such a legendary brand, which stamped an undeniable mark on the world of motorcycling. The next chapter in the brand’s history is going to be an exciting ride.” Mr Anand Mahindra, Chairman of Mahindra Group.

No prices have been set for the new 2022 BSA Gold Star 650, but it’s likely to be between £5-6,000, given that the logical competition is the Royal Enfield Interceptor 650 range. Ironically, both brands trace their history in motorcycling back to the early 1900s, and both were part of Norton Villiers for a time before a modern resurgence under Indian leadership. Along with Norton, which is now owned by TVS Motors.

In the case of BSA, it was acquired in 2016 by Classic Legends Pvt.Ltd, which is a subsidiary of the Mahindra Group also responsible for the resurrection in Indian of Jawa. Mahindra also has a controlling stake in Peugeot motorcycles, in addition to producing their own range of scooters and motorcycles.

The original BSA Gold Stars were produced from 1938 to 1963. And the 350cc and 500cc single cylinder found strokes were some of the fastest bikes around, with the name coming from a traditional pin handed out to Wal Handley, after he lapped Brooklands at more than 100mph on a BSA Empire Star.

Various models were successful on both road and track, with Gold Stars taking 11 TT victories from 1949 to 1956, used by American flat track racers, and for motocross and scambling. And appropriately, the new model was unveiled at Motorcycle Live, located in the city which gave Birmingham Small Arms its name.

Keep up with all the latest coverage of BSA motorcycles, both new and old, here. And if you’re looking to pick up a secondhand classic BSA, check out what’s currently available via eBay, here.