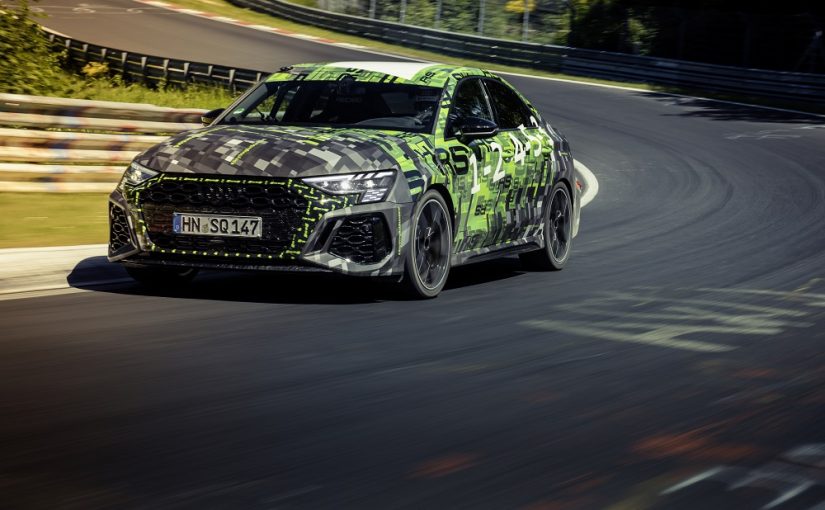 In the sport compact class, the red-hot 2022 Audi RS 3 is the new king of the Ring — and it wasn’t even close.

Given everything we’ve heard about the 2022 Audi RS 3, you didn’t have to be Nostradamus to predict it was going to be quick. Now, we know just how quick Ingolstadt’s new pocket rocket is. Because back in June, factory hot shoe Frank Stippler laid down a blistering time of 7:40.748 minutes, and smashed the compact car record. That beat the previous record — set by Renault using a Mégane R.S. Trophy-R — by nearly five seconds, so smashed is hardly hyperbole.

For safety reasons, the RS 3 in question was fitted with a roll cage and racing seats, which likely made it slightly heavier than bone stock versions. But aside from those concessions to the dangerous beast that’s the Green Hell, the car was stock, down to the Pirelli P Zero Trofeo R semi-slicks it was shod with for the lap. For track rats, they’ll be a must-have option, and according to Stippler, ensuring the proper pressures in the super-sticky rubber was key to the victory.

In the official press release, Technical Project Leader Marvin Schwätter didn’t specify exactly how tweaked the PSI was from the standard settings. For new owners headed to the circuit, that’d be a handy piece of info, so perhaps it’ll come out in the wash. Another key to the run was the trick torque splitter at the rear, which during corners, pipes twist to the outer wheels. This is the first time such a system has been employed on an Audi, and the distribution of power ensures both understeer and oversteer are kept in check.

According to Stippler, the multi-disc clutch system is “a quantum leap in terms of agile driving,” and given its success on the circuit, something we’re sure to see on future Audi models. Of course, other go-fast bits like adaptive dampers, ceramic brakes, and aggressive RS Performance modes were part of the package too, and help demonstrate just how potent the new RS 3 is when the gloves comes off. Watch the video below, and remember that buyers in the States aren’t left out of the fun. So stay tuned for info on when this record-beating sport compact will be available on our shores!