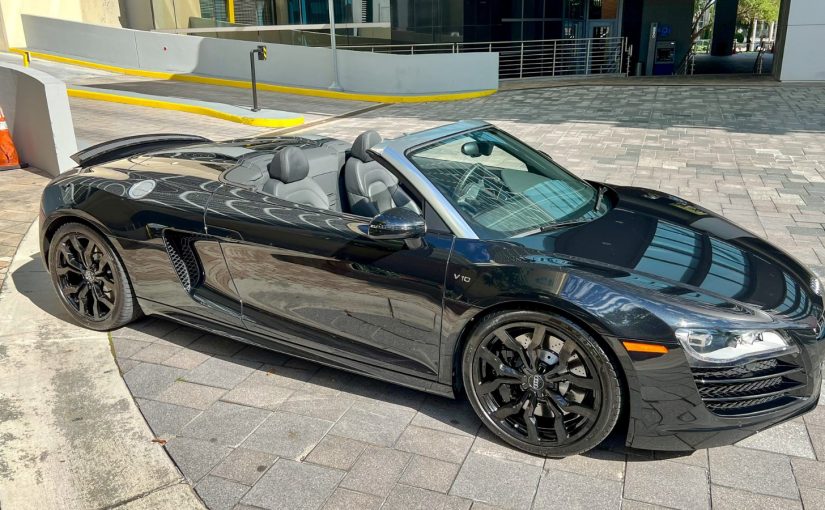 Timeless and rare, the Audi V10 6-Speed is the ideal car for cruising South Beach as a superhero’s alter-ego.

Quick, think of an exotic supercar! More than likely you pictured a Ferrari, Lamborghini, McLaren, or Porsche. But most people forget Audi makes the R8. Introduced as a concept in 2003, the first-generation R8 was built from 2006 to 2015. Initially equipped with a 4.2 liter V8 and Quattro all-wheel drive, the R8 could hit 60 mph in 4.1 seconds and top out at 187 mph. The V10 version launched in 2008 built on those impressive numbers. It hits 0-60 mph in 3.5 seconds and tops out at almost 200 mph, making it among the fastest cars in the world. This gorgeous example was recently auctioned and bid all the way up to $171,500.

The R8 in these pictures is a 2011 V10 Spyder featured recently featured on Bring A Trailer. Purchased new at Pembroke Pines Audi near Ft. Lauderdale, it only has 3,800 miles. No doubt it was taken out for cruises on the A1A or along Ocean Drive in Miami Beach. And as rare as it is, it probably got prime valet parking. Audi produces between 2,000 and 3,000 R8s a year, less than half of which are V10s.

Body by Audi, Engine by Lambo

Audi designed the body of the R8 and used their own 4.2 liter V8 for the car. In 2008 they turned to Lamborghini for the V10 engine. Lamborghini and Audi are both part of the Volkswagen group and the R8 shares its platform with the Gallardo. So it made sense for the Audi to receive the FSI V10 engine. However, the engine is tuned differently than the Gallardo and sounds different. So you would never guess the two cars are siblings.

Something else that makes this Audi R8 V10 a rare car is the 6-speed manual transmission. Most R8s are equipped with an R-Tronic single clutch or S-Tronic dual-clutch automatic transmission. Both automatics are referred to as “auto-manuals” because they can be shifted manually using paddles mounted behind the steering wheel. Audi’s auto-manuals are among the best, but there’s no substitute for a smooth-shifting 6-speed and exposed metal gated gearshift.

Audi makes some of the best interiors in the auto business and this R8 is no exception. The black interior is offset by brushed aluminum trim. All of the materials are top quality and have a premium feel. Each button, knob, or switch has a precise feel that is aesthetically pleasing. And everything is laid out intuitively. Hop in and you’ll immediately be comfortable driving this supercar.

The Audi R8 shares the design of its front facia with other Audi cars and SUVs. Even though it’s a mid-engine car, the grille is functional and provides air to the radiators. The R8 is clearly related to the A8, TT, and A6, but was the first Audi to feature full LED lighting. LED lights have a number of benefits. They last longer than conventional lights, use less energy, and are significantly brighter. They are also more compact and weigh less, making them ideal for a performance car.