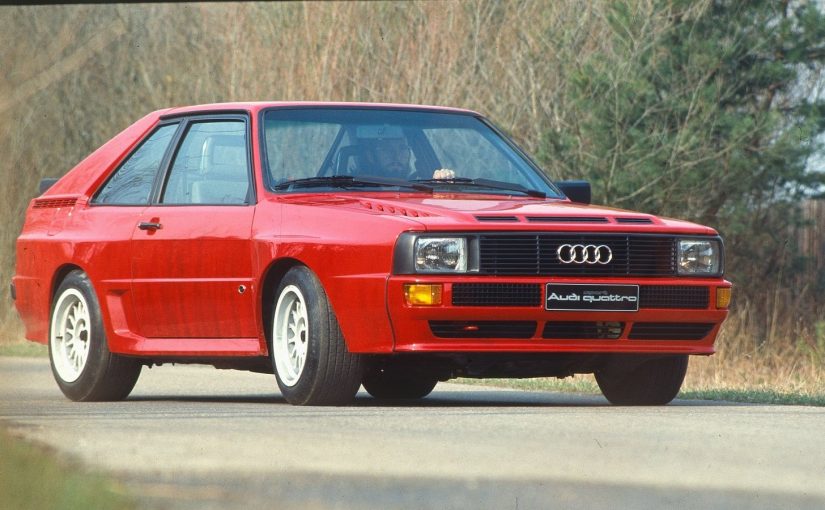 40 Years of Quattro All-Weather Performance
Audi’s top performance cars have included their Quattro all-wheel-drive – here are eight of the best.

Let’s start at the beginning. The original Audi Quattro launched in 1981, setting off a bomb in the world of rally racing. Overnight it was clear the future belonged to all-wheel drive. The Audi Quattro won its first race and was a dominant force throughout the 1980s. On the road, the Quattro’s all-wheel-drive added a new dimension to driving. It was quick, its inline-five turbo helped to accelerate to 60 mph in seven seconds and top 138 mph. But nothing could match the Quattro’s grip or ability to power through corners. And it was fast no matter what road conditions it faced.

By the mid-1980s, BMW and Mercedes-Benz were turning mid-sized sedans into factory hot rods. BMW launched the M535i and M5 while Mercedes brought the AMG Hammer down on its competition. Not to be outdone, Audi took its lightweight, aluminum-bodied 200, added the turbocharged 2.2-liter inline five-cylinder and Quattro all-wheel-drive. If anything, the 200 Quattro’s performance was better than the original. With a 6.5 second, 0-60 mph time and a top speed exceeding 150 mph, it was more than a match for the M5 in any weather condition.

Something must have gotten into Audi’s strudel after they produced the 200 Quattro Turbo. They decided to bump the power of the 2.2-liter turbo five-cylinder to an astonishing 311 horsepower. Then they dropped that engine into the small Audi 80 sedan and wagon and added all-wheel-drive. The result was another Quattro – the RS2/RS2 Avant. The wagon became one of the fastest grocery-getters ever. In a contemporary test, Autocar found that the RS2 Avant could out run the McLaren F1 and a Formula One car to 30 mph on its way to a top speed of 163 mph.

After the RS2 Avant, Audi didn’t produce a true autobahn-stormer for 12 years, choosing to focus on luxury over performance. That changed in the mid-2000s when they launched the RS4. Instead of stuffing a turbo-inline 5 into the A4, they went with the 4.2-liter V8 from the A8. The result put BMW’s M3 on notice with a 4.8 second 0-60 time and a stratospheric redline of 8,250 rpm. And unlike the M3, the S4 and RS4 Avant could use that power everywhere at any time thanks to the Quattro all-wheel-drive.

If Lamborghini made a wagon, it would be the RS6 TFSI Avant. With the Italian boutique carmaker under the VW Auto Group, Audi was able to source the V10 used in the Gallardo for the R8 supercar and the RS6 Avant. Another shot across BMW’s bow, this time aimed squarely at the V10 powered E50 M5. Possessing a top speed of 180 mph, the RS6 quickly became one of the great Quattros. It could run down the M5 anywhere in Europe, especially in wet or snowy weather. The only place it couldn’t catch the BMW was the U.S. Unfortunately we never got this car.

They say racing improves the breed, but in Audi’s case, the Quattro improved their racing program. Taking nine Le Mans victories to start this century, Audi took their game to a new level with the R18 e-tron Quattro in 2012. The product of new FIA rules, Audi borrowed a page from Formula One and installed a KERS type system to power the front wheels. It also featured some other impressive equipment, like laser headlights and high pressure, direct fuel injection. Out of the gate, the R18 won Le Mans in its first outing and continued winning well into the 2016 season.

Audi resurrected the turbocharged five-cylinder for 2009, dropping it into the TT RS. It was an ideal match, the growl of the 335 hp five-cylinder added some ferocity to the TT’s quick, terrier-like nature. It was perhaps the first modern Audi that harkened directly back to the original Quattro. The lightweight TT RS hit 60 mph in 4.5 seconds and tackled any road or weather condition with power and finesse.

More than just a Lamborghini Gallardo with Audi’s four-ring logo on its nose, the R8 Spyder 5.2 FSI V10 is the ultimate expression of a Quattro exotic car. The R8 Spyder, coupled with the V10 and all-wheel-drive, offers supercar performance with a smooth, comfortable ride and light, precise handling. Boasting the same 3.7 second 0-60 mph time and 195 mph top speed as the R8 coupe, it adds the carefree wind-in-your-hair experience of top-down driving. The end result is so good, Car and Driver’s staff were ready to sell their kidneys for one.

>>Join the conversation about these Audi Quattro models right here in the Audi World Forum!

For help with the service of your car, check out the how-to section of AudiWorld.com.