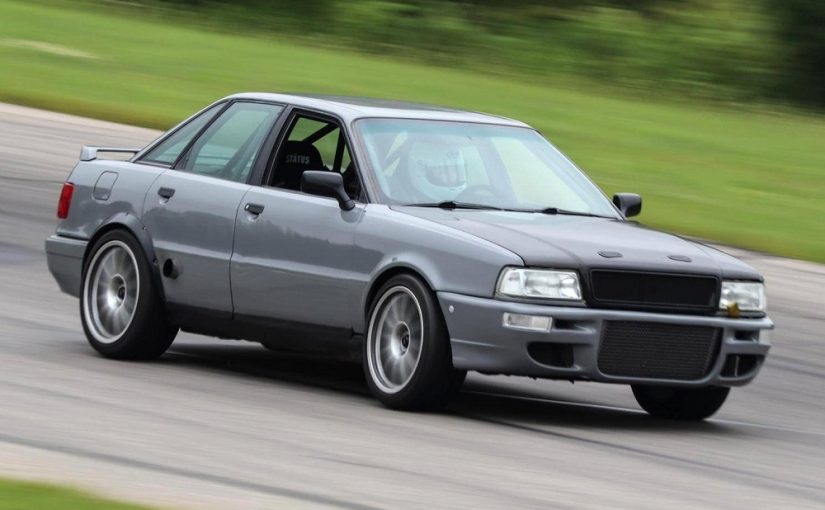 A Bosch Motorsport engineer went to town on this Audi 90 Quattro — and turned it into a track-day terror.

As the most famous car YouTuber on the planet, it was smart that Doug DeMuro used his popularity to launch his own automotive site. And so far, I’ve had a lot of fun cruising his auction site. But this hyper-customized 1990 Audi 90 was the first listing on Cars & Bids I wanted to post about for AudiWorld. I mean, just look at this beast. Over the course of 15 years, a Bosch Motorsport engineer went to town on it, and turned it into a fire-breathing track-day terror.

Of course, eagle-eyed folks are going to spot plenty of obvious mods, like the side-exit exhaust, carbon fiber hood, and massive intercooler. But the further you dig into the build of this baby the crazier it gets. For starters, the 2.2-liter turbo five-cylinder has been stoked to produce an astonishing 516 horsepower and 375 lb-ft of twist — in the lowest tune parameter. The higher one raises those already-lofty figures to 617 horsepower and 463 lb-ft. Because of course it does.

According to the listing, the mighty mill started as a long block built by California’s Four Ring Performance, and has been fortified with a ported head, a BorgWarner EFR8374 turbo and a TiAL wastegate. As you’d expect given the builder’s day job, there’s plenty of go-fast Bosch kit on board, including a Bosch 80mm electronic throttle body, Bosch Motorsport MS6.1 ECU and PBX90 power distribution module, and a Bosch Motorsport DDU7 driver’s display. A mil-spec harness connects all the dots.

All told, the body is about the only factory bit left here, and it’s been gutted of anything extraneous, and fitted with a custom full cage. In looking over the-crazy long build sheet, I found it particularly interesting to see what parts the builder cribbed from other cars. For example, the front brakes are from a Porsche 928 S, while the rear units previously saw service on a Cayman. The electric power steering comes courtesy of a Toyota MR2. Not to lean too lean to hard on the old “too much to list” trope, but if that phrase applies to any vehicle I’ve written about in the past year, it’s this one.

So I’d highly encourage you to head over and check out the build sheet — because it’s bonkers. Just listen to it wail on the dyno! At the close of the auction, this went for just $23,000 which given all the time and money that went into building it, has to mean pennies on the dollar. But given how far this is from factory, not to mention the whole “buying someone else’s project thing,” you’d have to be a mechanical savant to even know where to start if something goes wrong.