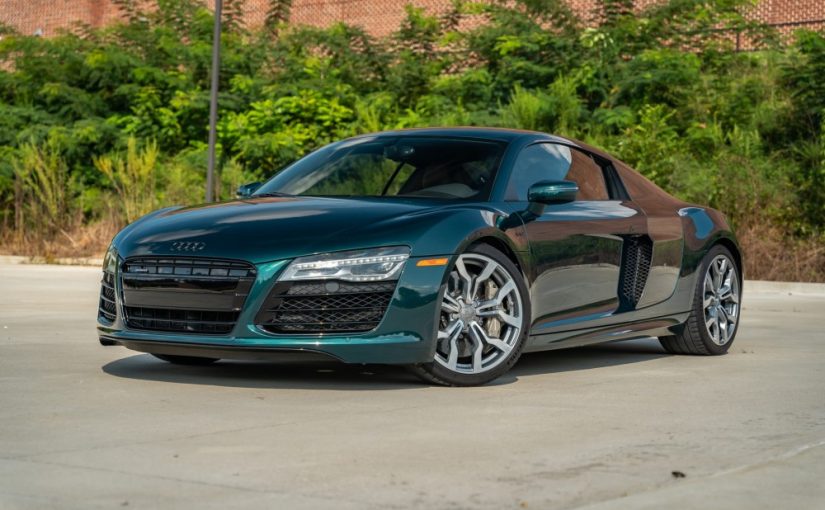 The only one from 2015 with Emerald Green Mica over Nougat Brown, Audi R8 V10 glitters in the sun like the gem it always is.

There’s only one supercar Audi builds in its lineup: the R8. When the 4.2-liter FSI V8 isn’t enough, though, the 5.2-liter FSI V10 drops the mic with its extra pair of cylinders. Pair either one up with Ingolstadt’s beloved quattro all-wheel drive, and you have a platform for greatness, no matter what you do with it.

One previous owner of a 2015 R8 V10 chose exactly that when they placed their order for a one-of-a-kind color combo. Now, that same R8 rolls across the virtual block of Bring a Trailer, awaiting to become someone’s new treasured gem. As you know, Audi offers more colors than what’s in the configurator through its Exclusive paint catalog. And this R8 V10 lives up to that name, and more. It’s the only Emerald Green Mica model with a Nougat leather interior built in the 2015 model year. As if seeing an R8 V10 on the road wasn’t a rare sight on its own. Speaking of the Nougat, you can never go wrong pairing such a deep brown like this with a green like that. Here, the gated shifter for the six-speed transaxle ties everything all together. Carbon-fiber trim and a black Alcantara headliner accent the luscious leather. The heated and power-adjustable seating making for a comfortable experience on the road, too. Of course, these are the best seats in the house to hear the 5.2-liter V10 sing. All 550 horses and their 398 lb-ft of torque, all going to the 10-spoke 19-inch wheels and their Michelin Pilot Sport 4S tires. Talk about eating up the road! The V10 sings a new tune with a Fabspeed exhaust, though it still has the original song tucked away.