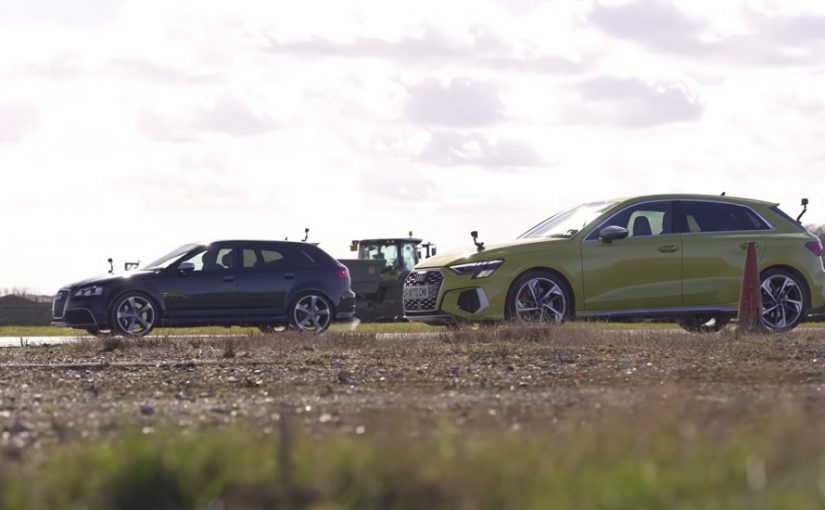 One packs a turbo-five and a salvage title. The other runs a turbo-four and a factory warranty. Both RS 3 and S3 put on a good show.

Here in the United States, the only S3 available to us is the sedan. Which is fine. However, the sedan’s trunk doesn’t offer the same utility as the hatchback on sale over in Europe. Throw on the power of its 2.0-liter turbo-four, and the only challenger to its throne is the hottest Audi hatch, the RS 3.

Even one nearly a decade older. Carwow‘s Mat Watson recently pitted a brand new S3 against a salvage 2012 RS 3 rebuilt by YouTube channel Saving Salvage. Though Audi fans come out on top of this intra-familial battle, let’s see if older or newer is better. “What will happen in a drag race between the new Audi S3 and the old RS 3?” asks Watson. “We’re gonna find out by racing them over the standing quarter-mile.”

The new S3’s turbo-four delivers 310 horses and 295 lb-ft of torque to the corners via a seven-speed auto and the quattro system. The older RS 3, meanwhile, packs a turbo-five with 340 horsepower and 332 lb-ft of torque. Both weigh exactly 3,472 pounds, and both were priced about the same in their respective time periods. However, the S3’s engine sounds muted through its exhaust, while the RS 3 sounds more alive. A sign of what’s to come? “Back in the day, cars sounded better,” said Watson of the RS 3. “Especially five-cylinder units, like in that car. It’s one win to that. Let’s see what happens in the drag race. Hopefully, I can restore some faith in modern cars.”

Nope. On the first go, Watson fluffs the gear change, allowing the RS 3 to soundly beat its younger S3 self. However, he returns the favor on the second run, just by moving off the muddy bits at the line. The final run saw both cross the finish in 12.7 seconds, though the older RS 3 beat the new S3 by a nose. Next up: the rolls. The RS 3’s turbo-five pulls away to take the first win while the S3 was in comfort mode. The S3 wins the second roll after the RS 3’s gear changes didn’t work in the older car’s favor. The third and final roll is all RS 3, though, thanks to that turbo-five.

However, the final win would go to the S5. On the emergency stop, the newer Audi stopped in less distance than the older RS 3. As Watson says, “new car brakes better than the old.” “[The RS 3] was written off, and has been rebuilt,” said Watson. “And some of the horses may have escaped in that process, who knows. Whereas this [S3] is brand new.”

While the new S3 stops better, the RS 3’s extra cylinder means it can keep up, if not surpass the new machine. Time marches on, indeed.