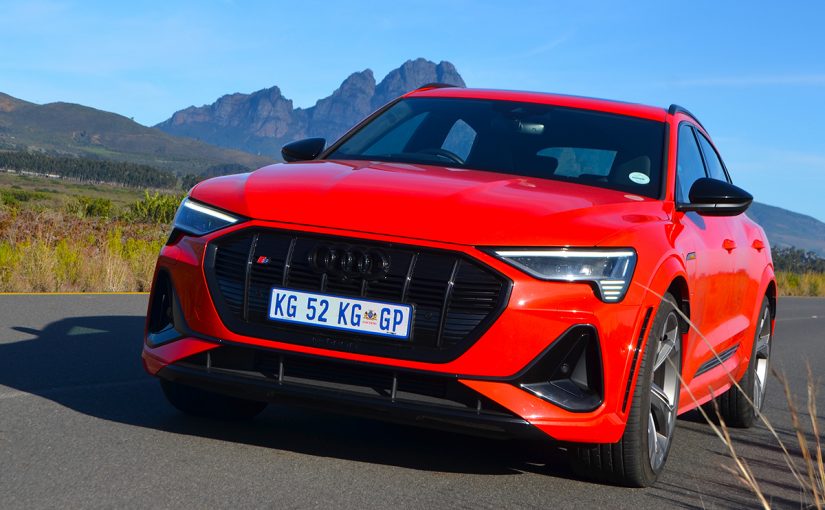 Like all EVs, the Audi e-tron presents a bit of a learning curve when it comes to range and battery capacity.

While mass-produced EVs have been around for over a decade now, the vast majority of Americans have never owned one, let alone driven one. That is slowly changing, of course, as automakers like Audi map out an all-electric future devoid of ICE. However, as any EV owner will tell you, there’s a bit of a learning curve involved with making the switch to electrification, and one of the most important points is understanding that range can and will vary based on a number of factors. That much is clear from this fascinating discussion in the AudiWorld forums, which started with a query from a new Audi e-tron owner. “The range estimator takes your recent driving and electric consumption into account when presenting the estimate,” said skaven81. “So if you are a spirited driver and/or often drive at high speeds that result in higher consumption, then the GoM will predict less range for a given SoC (state of charge). This fluctuates all the time. For example, if you take the car out in winter without using a departure timer with cabin preconditioning, you’ll burn a ton of energy on the initial heating of the cabin, and if it’s a relatively short trip, your average energy use may be something like 1.8 mi/kWh. This will reflect in the GoM estimated range, and at 80% it might only say you have 120 miles of range. In short, it’s entirely normal for the range estimate to fluctuate even if you always charge to 80%.”

Indeed, real-world results vary based on speed, temperature, and driving habits, which is also true of ICE-powered vehicles. But what’s particularly confusing for many is the fact that while EVs have different battery sizes, they also don’t use all of that capacity, in spite of what automakers might advertise. “All the Audi marketing materials tout the e-tron’s 95 kWh battery,” skaven81 added. “So if the first thing a new owner did was see that at 100% charge they’ve only got 86kWh available, you know that the dealer will be getting a call about that. Audi could stave that off by including a note on that screen that explains the battery buffers (or perhaps shows all of the values together), but it still creates a recipe for confusion and unhappy customers. A simple 0-100% scale is far more intuitive for the vast majority of owners. Sophisticated folks like us can simply multiply the SoC% by 86kWh to get the actual remaining capacity.” Of course, there’s also the matter of keeping one’s battery in the 20-80 percent state of charge range, which is where it charges the quickest and helps prevent battery degradation, hence why everyone is so focused on the 80 percent figure. Regardless, this sort of information is truly key for new EV owners that may not understand how these things work. So be sure and head over here to check out this interesting and informative discussion in its entirety, and ring in with your own questions so our resident experts can answer them for you! 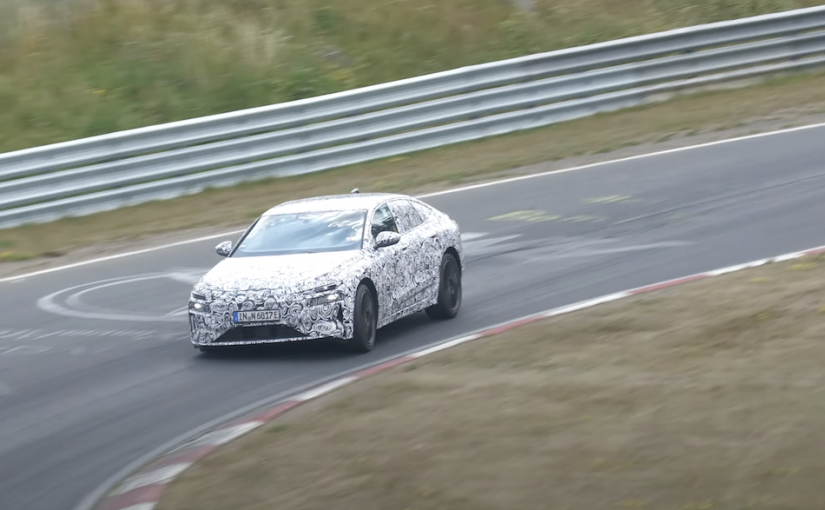 The 2024 Audi A6 e-tron has been spied testing at various locations around the globe recently, which means that we’re getting ever-closer to an official reveal for the latest all-electric stunner in the brand’s portfolio full of them. Now, Car Spy Media has spotted a 2024 Audi A6 e-tron prototype taking some hot laps at the iconic Nurburgring, giving us an even better look at this stylish machine showing off its impressive – albeit silent – performance.

Riding on the PPE (Premium Platform Electric) platform co-developed by Porsche and Audi, the A6 e-tron will share its underpinnings with the upcoming Macan EV, though it will also compete directly with the Mercedes-Benz EQE sedan and the Tesla Model S. A traditional mid-size sedan accessible to a wider berth of buyers, the A6 e-tron looks much like the concept that preceded it, at least from what we can tell given the fact that it’s completely covered in heavy camo. Details regarding the new A6 e-tron’s powertrain remain a bit of a mystery, though the concept was powered by a pair of electric motors churning out a combined 470 horsepower and 590 pound-feet of torque, which drive all four wheels. That’s enough to propel the sedan from a standstill to 62 miles-per-hour in less than four seconds. The A6 e-tron concept also utilizes a 100 kilowatt-hour battery that provides up to 435 miles of range on a single charge, though that’s using Europe’s notoriously optimistic WLTP cycle, so we can expect a bit less than that when the EPA gets its hands on the stylish new model. Charging should at least be brisk, as the concept’s 270 kilowatt fast-charging system can reportedly add 186 miles of range in just 10 minutes.

Set to go on sale in 2023 as a 2024 model year vehicle, the A6 e-tron figures to be an interesting addition to the brand’s EV lineup, and one that should prove quite attractive to buyers that are looking for something a bit more traditional and perhaps even more stylish than the Model S, as well as a proper alternative to the very similar EQE. 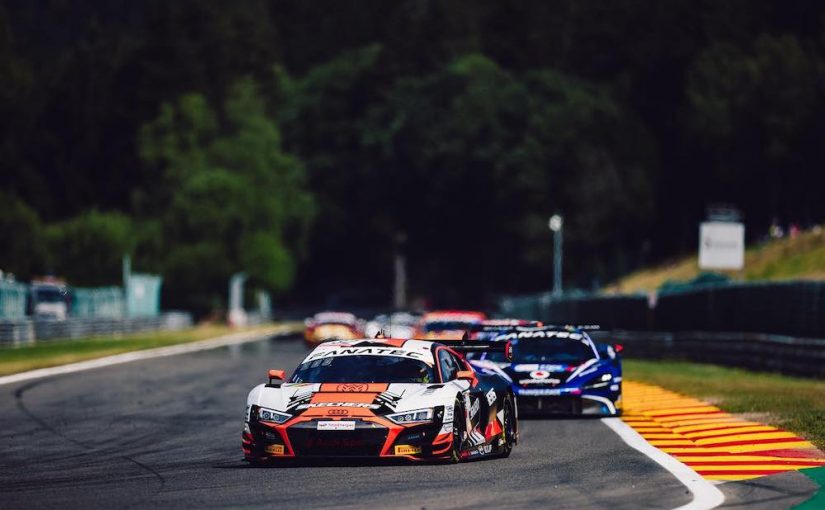 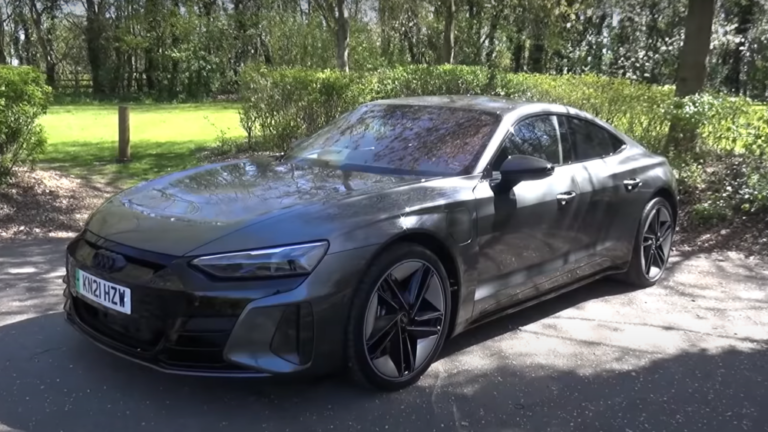 The 2022 Audi RS e-tron GT is remarkably similar to its Porsche twin, but with a few differences in terms of feel.

It’s only been a few months since the 2022 Audi RS e-tron GT was first revealed, stunning all of us with its drop-dead gorgeous looks and promised electrifying performance. But that’s to be expected from what is essentially a Porsche Taycan in a finely tailored suit, as much as 637 horsepower, and a claimed 0-60 time of 3.1 seconds.

Throw in a scrumptious interior, and you’ve got a rather unconventional/conventional EV for folks that don’t like the general quirkiness of EVs. And now we know what it’s like to drive, too, thanks to mega-popular YouTuber Shmee, or Tim Burton as he’s known in the real world. Burton currently owns a Taycan Turbo S, so he’s more qualified than most to provide some driving impressions of the new Audi RS e-tron GT, too. First off, he points out a few differences between the two cars. “This car drives remarkably similar to the Taycan, but the steering is different, the pedal feel is different, the sound is different,” Burton says. “In terms of driving, it’s a very welcoming car. When you get out on the open road and put your foot down, it just delivers.” As is the case with all EVs, the RS e-tron GT is certainly not light, weighing in at over 5,000 pounds. But apparently, it hides that mass well on the road. “You don’t necessarily realize that it’s quite that heavy,” Burton says. “It’s a big car, it’s a long car, but it has rear-wheel steering so it still feels quite agile and nimble on its feet.” Burton also notes that even in Dynamic mode, the steering is still pretty light, but that’s to be expected for a plush vehicle like this. What’s particularly interesting about the acceleration of the RS e-tron GT, however, is just how similar it is to the more powerful Taycan Turbo S. “This feels the same,” Burton notes. “The same kind of speed, the same kind of instant propulsion that shoves you in the back. That difficulty to lean forward when you’re on the throttle.” So what’s different? “Pretty much everything to do with the driving and your interaction from the steering feel to the feel of the throttle pedal and the brake pedal just being that touch softer,” Burton concludes.

Thus, think of the Audi RS e-tron GT as more of a commuter-friendly version of the sharper Taycan Turbo S, though one that presents few compromises in terms of performance when compared to its sportier twin.