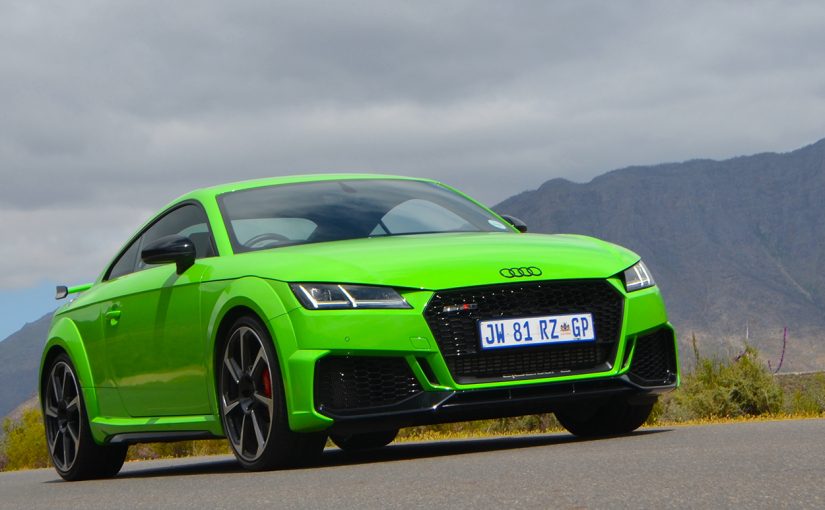 There’s something quite fundamental about a five-cylinder turbo quattro Audi. Something like a front-engined V12 Ferrari or a rear-mounted boxer-six Porsche. A configuration molded in an incredible pedigree as significant as history itself. I was fortunate enough to witness those wild rally and race quattros roaring, belching and squealing through the forest in the dark of the night, back in the day. And in front of a frenzied racetrack crowd too. So that world-beating 40-year-old pedigree is still deeply embedded in my brain. As it should be in yours, if you’re a 50 year or older petrol head today.

The best thing about all that, is that like Ferrari’s modern V12s and the latest Porsche 911, Ingolstadt still honours its splendid heritage. You can walk into your nearest Audi Sport dealership and buy a five-pot turbo quattro TT RS right now. But be warned, it won’t be so for very much longer…

Having the facelifted Audi TT RS Coupé quattro on test, ended up being a refresher to those days lurking in the 3 am rally forest as the Ûr-quattro approached flat out through the dark of night. Its animal howl screaming through the forest. Or those chirping, charging quattros fighting off Trans Am quad-rotary Mazdas, Chev and Ford V8s on track. If anything, TT RS salutes its brand history better than any Audi I’ve ever driven. It made me imagine I was charging along in one of those incredible race or rally icons. And that’s what makes this car sad. So, so sad.

This is apparently the last TT RS. As Audi prepares to forsake its incredible five-pot turbo quattro heritage for batteries and a device more at home in a vacuum cleaner, hair drier or washing machine. Best we rather leave that right there, then. The Farewell TT RS is a Delectable Car

Getting back to this green matter at hand. Let’s just call it Hulk green. It fits. Audi’s farewell TT RS is a delectable little car. Stunning looks supported by all that RS kit, splendid wheels and an attitude that should warn those Porsches and Ferraris it can kill off the line. And backed by a cabin to match its big R8 brother. It must be among the best bang-for-buck performers out there.

There’s not a hell of a lot different to the pre-facelift car under the skin. But this latest Audi TT RS Coupé’s front end was ‘completely redrawn’ to deliver a more macho front and a sharper rear end. Step inside, settle into that honeycomb pattern fine Nappa RS sport seat and you may feel lost. What! No central infotainment screen? Well, that’s so refreshing! And it’s not that the car loses its connectivity. No, not at all.

The MMI Navigation Plus still all there – it’s rather just placed on the dash behind the flat-bottom, toggle and paddle shifter RS sport leather steering wheel. As part of T RS’ 12.3-inch Audi virtual cockpit. And it works very well, too.

All of which gives the rest of TT RS’s completely driver-focused, albeit spartanly trimmed fascia such a clean and fresh feel. Makes one wonder what the chase for the biggest, baddest car infotainment screens, is all about? Also makes us wonder who needs touchscreens in cars? Very Few Cars Will Live With the Audi TT RS

Rest assured that there are very few cars of any description that can live with it. This TT RS will shock whatever who brings, that’s for sure. It does so with that growling, rasping crackle snap pop 5-pot soundtrack. Which never fails to send a shiver up the spine.

All that said, while it’s indecently quick, We are also convinced TT RS’s performance is still a touch restrained. To protect its bigger, more expensive quattros, perhaps? So much so that we sense its launch controls are configured to deliver those mid-three second to 60 mph runs. Were the men from RS to configure the pullaway for ultimate acceleration, TT RS would likely chase the twos. It’s All Getting Swept Under that Giant Electric Blanket

Be that as it may, this mean, green pocket supercar not only rewrites the record books at a fraction of the price. It also so brilliantly salutes the very core of Audi‘s ethos in a pretty sensational blend of pedigree and performance.

Which makes it all that much sadder. That they’re about to sweep all that culture, class and history right under that electric blanket called the future…