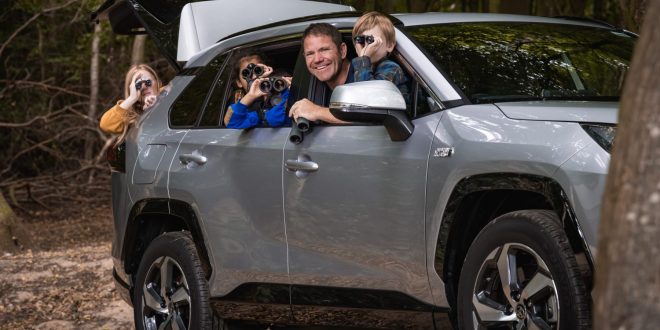 Keeping kids occupied during the summer holidays is no easy task. Exploring the great outdoors, whatever the weather, is one way to enjoy time together as a family.

Toyota has teamed up with TV naturalist, adventurer and father-of-three Steve Backshall to provide ideas for adventures in nature.

“For many parents, bug-hunting and pond-dipping are reminiscent of their own childhoods, while for others, new ideas for outdoor experiences will help increase knowledge and appreciation of the natural world and will entertain kids of any age during the long school holidays,” says Steve.

Steve’s trusted countryside companion is the new Toyota RAV4 Plug-in Hybrid SUV, which is ideal for a family expeditions.

It offers low emissions and can drive for up to 46 miles in pure electric mode. All-wheel drive is standard and there’s a Trail Mode, so it’s perfect for tackling tricky terrain, plus there’s boot space for naturalist kit, picnics and spare clothes.

Steve and Helen’s new book, Wildlings: How to raise your family in nature (published by Two Roads) contains the following outdoor ideas for all the family…

Purchasing a vehicle can be an exciting adventure. You’ve probably done your homework and chosen …