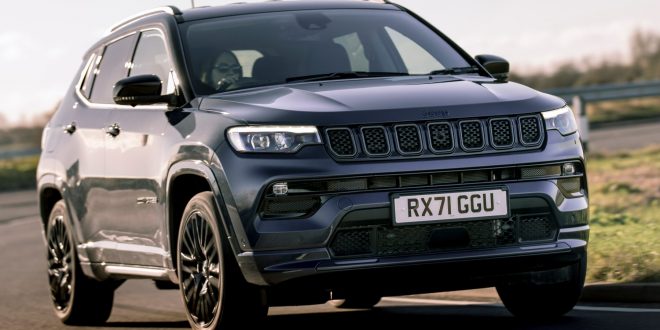 When I first drove the Jeep Compass soon after its launch in 2018, I really wanted to like it. It was practical and looked good, but for me it was let down by an unsophisticated diesel engine, disappointing fuel economy and an underwhelming interior.

Fast forward to 2022 and Jeep has added a new plug-in hybrid version to the revamped Compass range, which will battle it out with other PHEV SUVs including the Ford Kuga, Kia Sportage, Toyota RAV4, Vauxhall Grandland and Volkswagen Tiguan.

Using much the same plug-in hybrid system as the smaller Renegade 4xe (which is no bad thing), the new Compass 4xe has also been facelifted inside and out, and gets a technology update.

Like all PHEVs, the Compass 4xe offers the best of both worlds, delivering some of the experience of an EV without any of the associated range anxiety.

My test car was fitted with the most powerful version of the hybrid system used in the Renegade, producing a combined total of 237bhp from the 1.3-litre turbo petrol unit. There are two electric motors and there’s assistance from a 11.4kWh battery.

On the road, the Compass works out when it’s best to operate on electric, petrol, or a combination of both, to give the ideal performance in any given situation.

The EV mode lasts for up to 30 miles at speeds of up to 80mph, which means visits to the garage will become rare occasions for low mileage users. As with all PHEVs, it works most efficiently if you can charge the battery overnight or at work (less than two hours using a 7.4kW chargeppoint).

There are potentially huge fuel savings to be made, but even on long journeys where most of the time is spent on motorways using the petrol engine with hybrid assistance, it can return around 40mpg.

The biggest changes are reserved for the cabin which seems to have been given a complete overhaul, with better build quality, more of an upmarket feel and bang up to date technology.

There’s also a “Hey Jeep” voice assistant for hands-free adjustment of the air conditioning and media, or setting the TomTom sat nav. Slick and crisp, the new infotainment set-up is a huge improvement.

The new Compass is a surprisingly refined cruiser, and you’d never know the engine is so dinky, given the overall amount torque on tap.

Obviously the engine becomes more vocal if you floor it and it’s no hot hatch on kickdown, but for the record, the petrol hybrid combo can deliver a 0-60mph time of just 7.3 seconds and a top speed of 124mph.

More importantly for many, CO2 emissions are as low as 45g/km, meaning business users can access significant tax benefits.

There’s the occasional hesitancy when switching between electric and hybrid – and vice versa – but the system works well generally. And compared to some PHEVs fitted with CVT gearboxes, the traditional six-speed automatic transmission is a breath of fresh air.

Basic drive modes available include Hybrid, Electric and E-save, which stores up the battery energy for use at a later stage while maintaining range or can convert the engine into a generator to charge up battery.

I tried a little green-laning and it coped admirably on road tyres. Compared to the opposition, it’s one of the most capable 4×4 off-roaders with plenty of traction and healthy ground clearance.

Even if you only use a tiny percentage of that ability, it’s good to know that it can in theory cope with rough terrain or extreme weather conditions, such a flooding.

A commanding driving position, compact exterior proportions, supportive leather seats and driving assistance tech (including a reversing camera as standard and an optional 360-degree camera), mean that progress in the Compass 4xe is comfortable and classy.

The Compass handles well, feels composed and is easy to manoeuvre in town. For a relatively heavy car, it’s even quite entertaining to drive, especially in Sport mode, with body lean under control and decent grip.

Overall cabin space is not class leading, but there’s room for two adult-sized passengers in the rear, while luggage capacity is slightly down on a regular Compass, offering a modest 420 litres (1,239 litres with the rear seats flipped down).

The update means the Compass 4xe is now packed with the latest safety kit too, ranging from autonomous emergency braking (AEB) and Traffic Sign Recognition to Drowsy Driver Alert and LaneSense Departure Warning.

Verdict: With the introduction of plug-in hybrid technology, the Jeep Compass is now the car it always should have been. Comfortable, refined, well built, economical, easy to drive and packed with the latest tech, the 4xe is one of the best and most capable 4×4 PHEVs on the market.