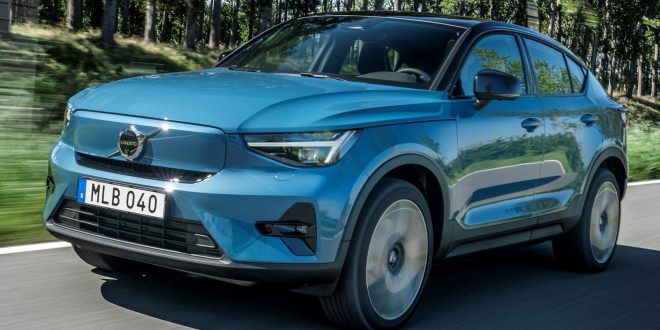 Volvo is doing its bit to save the planet, and it has an ambitious plan for a zero emissions future.

The Swedish car maker’s latest model, the C40 Recharge, is a case in point. It’s electric-only (there will be no petrol or hybrid variants) and it’s manufactured using a variety of sustainable materials.

For instance, the carpets are made from 71 recycled plastic PET bottles, and thanks to renewable wool fibres, it’s the first Volvo to feature leather-free upholstery.

You could even say the car itself has something of a recycled feel to it because it shares its EV powertrain and much of its body with the XC40 – Volvo’s big-selling SUV.

Unlike its sibling, it’s sleeker with a lower roof line and steeply-raked rear window, while the front end introduces a new face for electric Volvos. Here, the signature Thor’s Hammer headlights are augmented with pixel technology designed to avoid dazzling other road users.

It’s also fitted with the latest version of Volvo’s infotainment system, jointly developed with Google and based on the Android operating system.

So now there’s access to Google Play apps and services like Google Assistant and Google Maps. It’s also capable of over-the-air updates, which means the car is constantly kept up to speed with the latest software.

The voice commands (prompted by “Hey Google”) usefully cut down on the swiping, pinching and scrolling otherwise needed to control the features within 9.0-inch central touchscreen.

C is for Crossover and Volvo claims the C40 Recharge provides buyers with the high seating position that its owners prefer. The reality is that there’s very little difference between the siblings apart from the design.

And I don’t mean that in a bad way because the pure electric XC40 Recharge is a fantastic package, offering the combination of style, practicality, performance and a decent range of up to 259 miles.

The C40’s lower roof line looks smarter and makes it more aerodynamic, resulting in a higher range of 273 miles.

It also differs from other models in the Volvo range because it can only be bought online and it’s also available with a ‘Care by Volvo’ package (monthly subscription from £729) which offers a warranty, servicing and roadside assistance, as well as insurance and home charging options where available.

At launch there’s just one version of the C40 Recharge available with an eye-watering ticket price of £57,400, though in time we can expect other more affordable specs.

We were given a quick tour of Volvo’s impressive state-of-the-art plant at Ghent in Belgium, where the C40 is assembled on the same production line as the XC40 and V60 estate.

Volvo is increasing EV capacity at the facility to 135,000 cars per year, and already expects more than half of the plant’s production volume in 2022 to consist of fully electric cars.

On the road, the C40 offers the same combination of blistering performance and polished road manners as the XC40 Recharge.

Developing a combined 402hp, it can sprint from 0-62mph in just 4.7 seconds, which is almost supercar fast. Plant your right foot on an A road and before you know it, you’re travelling at the legal limit.

The ride is smooth and refined, the light steering is sharp and it handles well for a relatively heavy crossover.

The brakes are progressive, which is relatively rare in EVs, and the regenerative braking system (which recovers kinetic energy otherwise lost during braking to recharge the battery) works well, especially in one-pedal mode where a simple lift off the accelerator is usually enough to slow the car down without using the brakes.

Ultimately, the C40 is a smoothie, at its best cruising. And as most EV drivers will tell you, the challenge of squeezing as much range as possible out of the battery is irresistible, so apart from the odd burst of instant-torque acceleration, it’s more about economical driving.

I have a few criticisms. I would have liked some drive modes (no Sport or Normal – just one-pedal or not). And even though the C40 Recharge ticks lots of eco-friendly boxes, the lack of leather and Scandi chic wood veneers made the interior less special to me.

The lower roofline also results in a slight headroom penalty for rear passengers six-foot or over, while the rear window itself is more post box than panoramic, so the view behind is on the challenging side.

Up front there’s a 31-litre compartment under the bonnet – ideal for storing charging cables. There are also plenty of storage spaces scattered inside the cabin for phones, water bottles and other clutter.

Needless to say, like all Volvos, the C40 is packed with the latest safety and driver assistance tech as standard, including lane-keeping assist, blind-spot monitoring, rear-cross traffic alert, autonomous emergency braking (AEB) and a 360-degree parking camera which makes it easier to get in and out of tight spaces.

However, at this price the C40 is up against tough EV competition – everything from the Hyundai Kona Electric, Skoda Enyaq and Kia e-Niro up to the Ford Mustang Mach-E, Polestar 2, Audi Q4 Sportback e-tron and Mercedes EQA.

Verdict: The stylish new Volvo C40 Recharge is a class act, blending performance, practicality and refinement with a good EV range and extensive safety features. At launch, the sole top-of-the-range model is on the expensive side, but in time the C40 will become more attainable as other variants are offered.