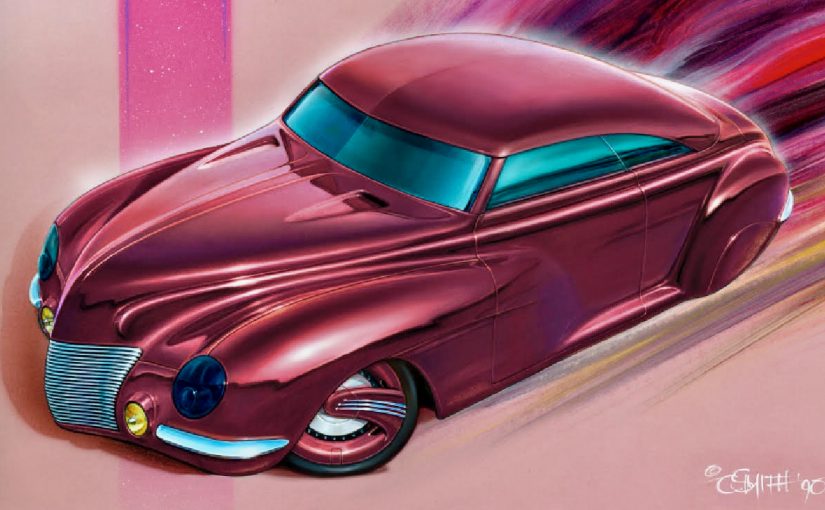 Rod & custom archivist/historian, Pat Ganahl blogs about Charlie Smith’s ROD & CUSTOM: ART & THE AUTOMOBILE that turns as many heads as do iconic show-stoppers. 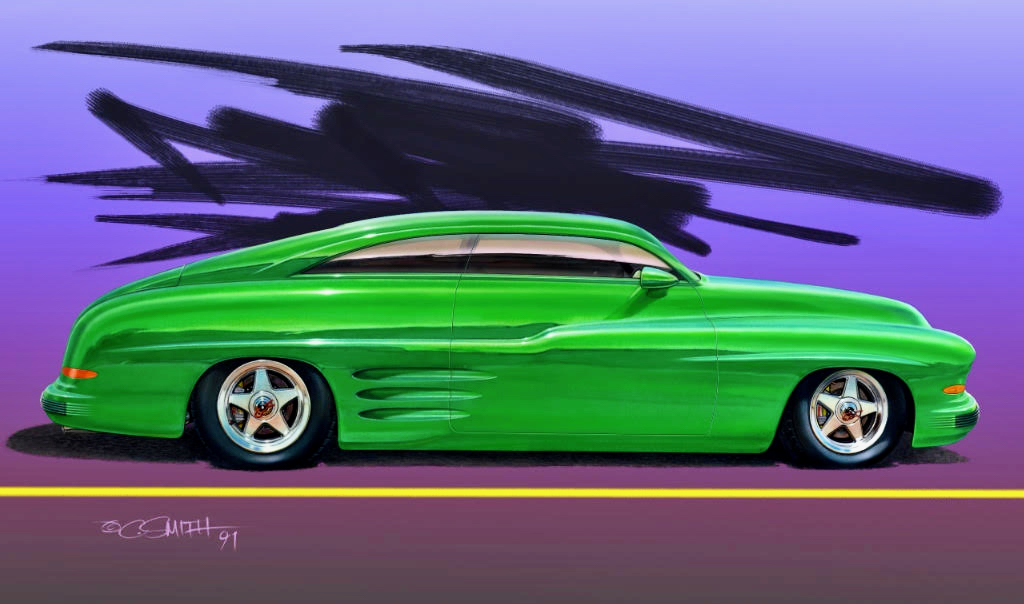 I was going to title this column “The Unknown Artist,” but that’s not true at all. I’ve known Charlie Smith of Kansas City at least since the mid-1980s. I’ve published his work in Hot Rod and Rod & Custom, and you’ve seen it elsewhere. You’ve also seen cars he’s designed, though you might not know it. Just one example is Pete Chapouris’ Limefire ’32 roadster, loosely inspired by Tom Pollard’s green-and-flamed ’29. 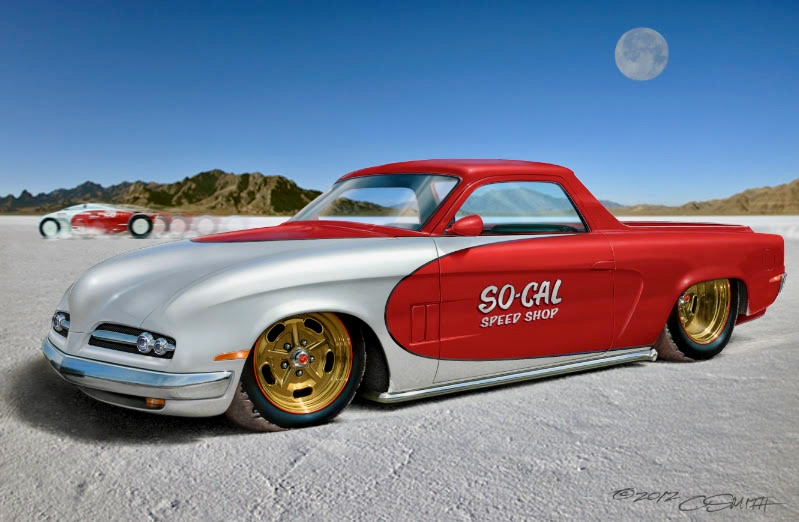 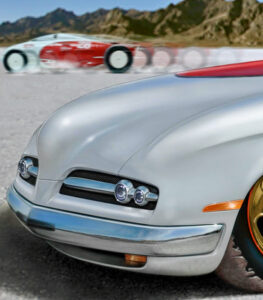 This is another piece he did for Chapouris’ So-Cal Speed Shop (on spec) when they restored the belly tank and built similar vehicles for Chevrolet. But look at the detail and realism in this. That’s why I call it Unreal Art–because it’s so super-realistic.

Charlie says he’s not doing this to impress viewers, he’s doing it to show whoever is going to build the car exactly how he wants it to look.  But just look at the texture of the Bonneville salt, the mountains in the background, and the detail in the gold-tinted and red-striped mag wheels in this rendition of a ’53 Studebaker pickup/push truck (note rubber strip on front bumper). And this was just a suggestion. It didn’t get built.

Charlie first displayed his version of the classic chopped ’40 Merc at a Design Center at the 1990 SEMA show. Then it was blue. He recently recolored it in this burgundy red. The front “wheel covers” are hub-attached to stay stationary as the wheel turns. 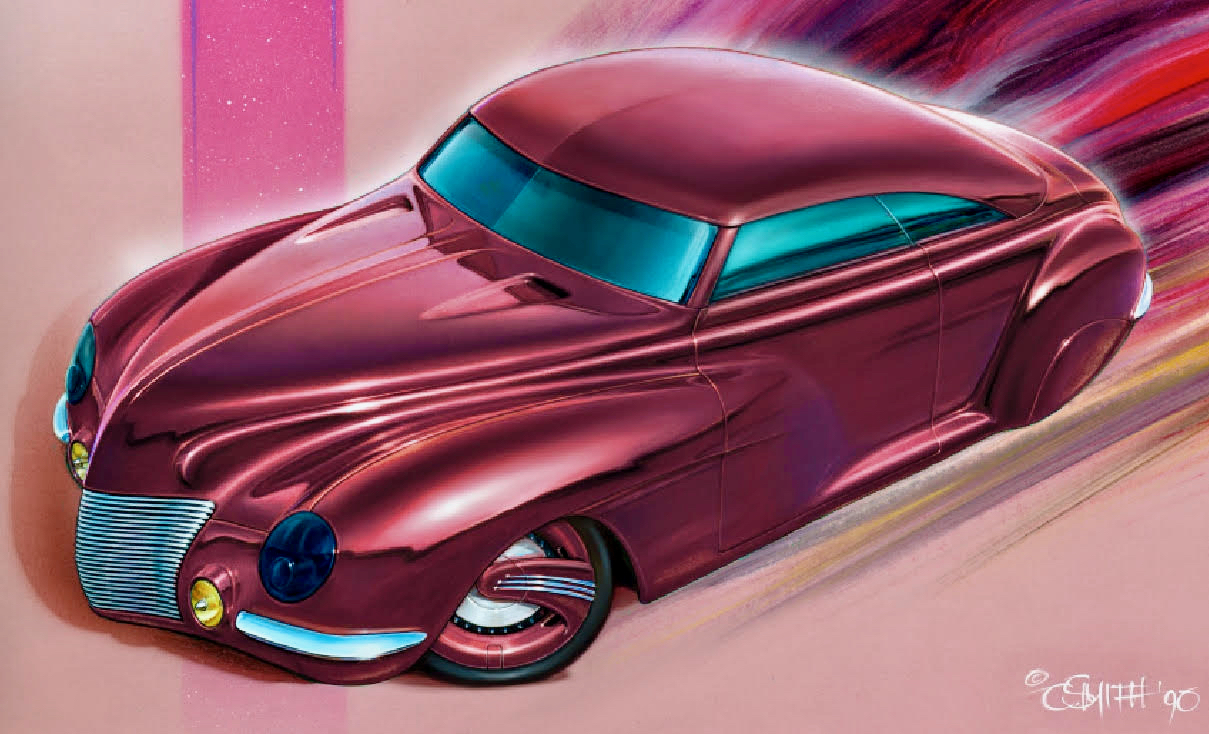 Want more realism? This one has a bit of Euro-flavor to it, as well, which is faintly reflected in the village/mountain background. Calling this his vision of a ’49 Eldorado, below, the obvious change is a slightly chopped and hard-topped roofline. Other changes include the obvious extended stainless rear skirts. Less obvious are ’55 Chevy-type hooded headlights and slightly enlarged taillights. 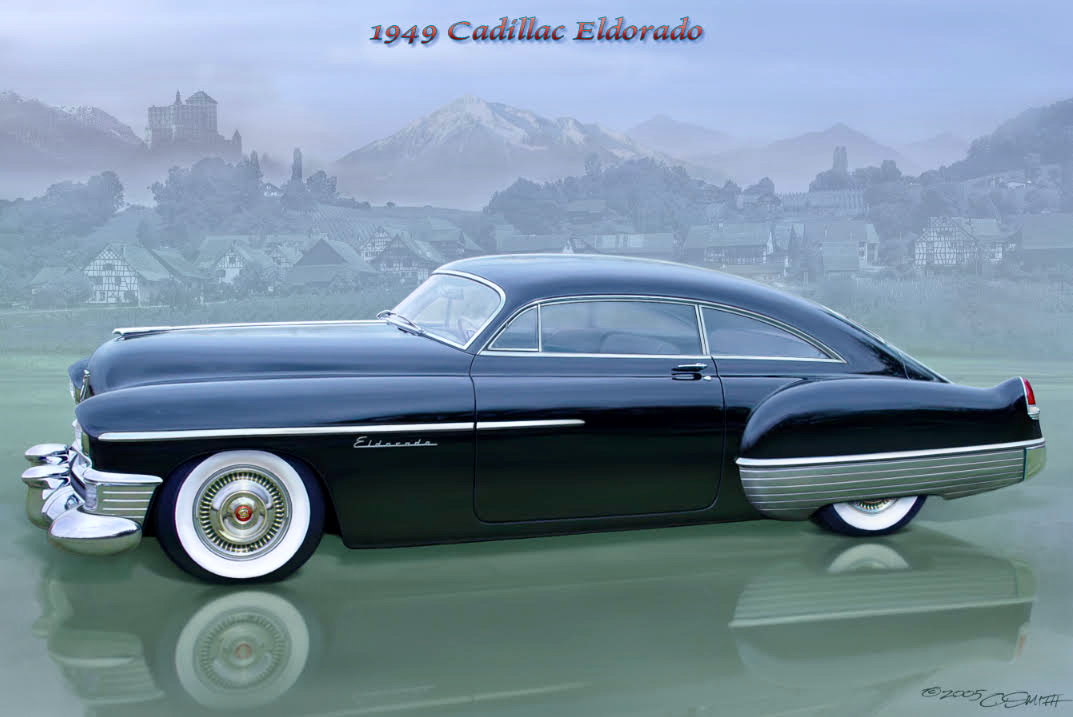 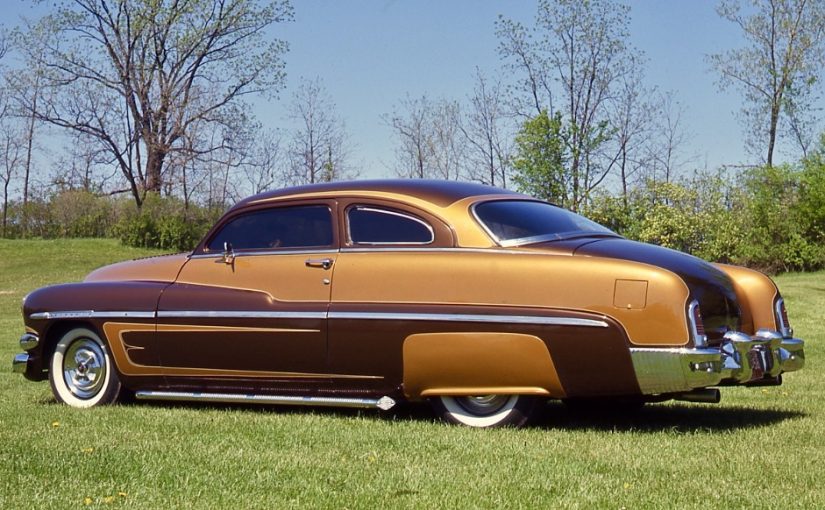 Hot Rod Archeologist Pat Ganahl has been tracking a long-lost customized and chopped Mercury with Tinseltown credits, but the trail on the ROD and CUSTOM: MYSTERY MERC! has gone cold. Help anyone? 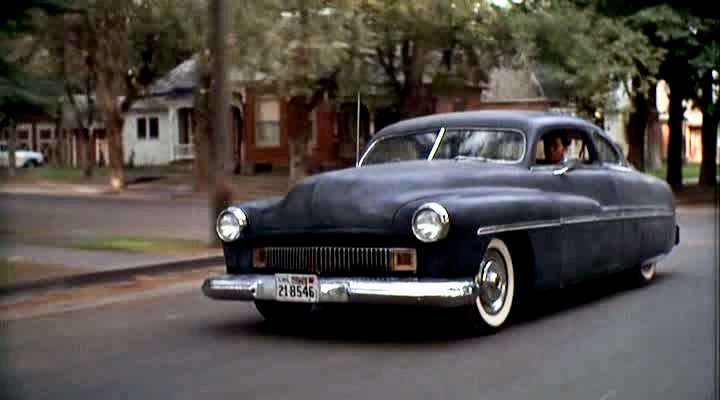 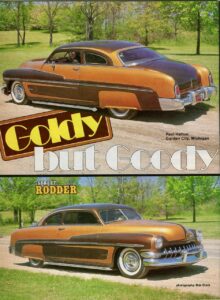 I love a good mystery. Whether written or real life, some are better than others. The thing is, in mystery books, if you can’t solve it along the way, by the end it reveals who done it.  In real life, that’s not always the case. Also in real life, as you’re solving one mystery, sometimes others pop up. Surprises. Lots of people don’t like surprises. But they also can be good or bad. I like good surprises, and I’ve been lucky to uncover quite a few sleuthing.

That indicates that I also love to sleuth. I like history. I love tracking down lost hot rods, and learning their stories. I’ve done two books on it. I coined the term “Hot Rod Archeologist.” And what is an archeologist if not a sleuth, a detective? Yes, I’ve encountered plenty of dead ends. But what’s really fun are the good surprises. When one discovery leads to another good one, and maybe another one after that.

What’s this jibber-jabber about? In this case, it’s the Mystery Merc briefly seen in the movie The California Kid. When I did  http://my column on the filming locations for that film a few weeks ago, nobody could tell me anything about that mildly chopped, dark gray primered ’51– who owned it, who built it, where it went? Most people didn’t even remember seeing it. Remember, that TV movie was first shown in 1974. 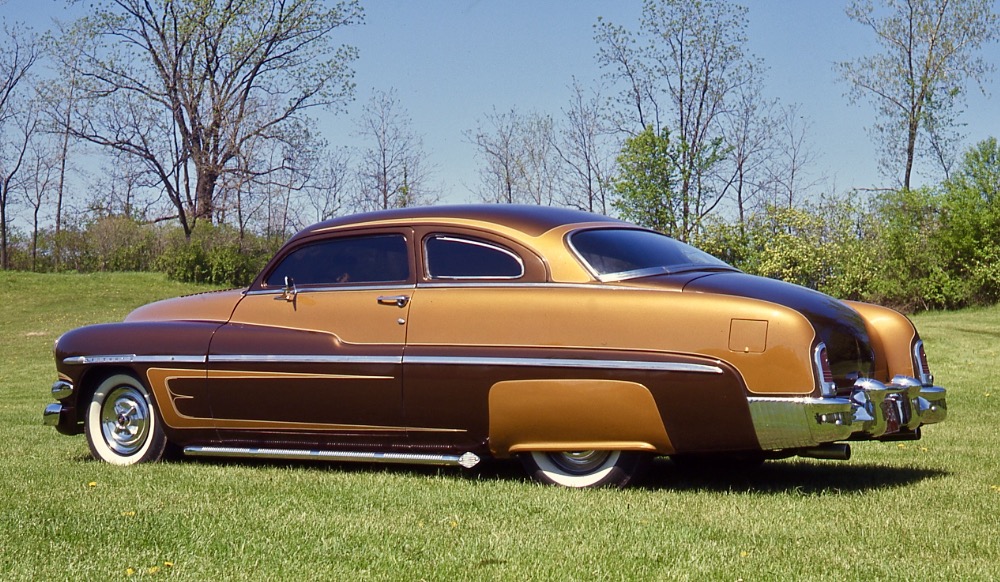