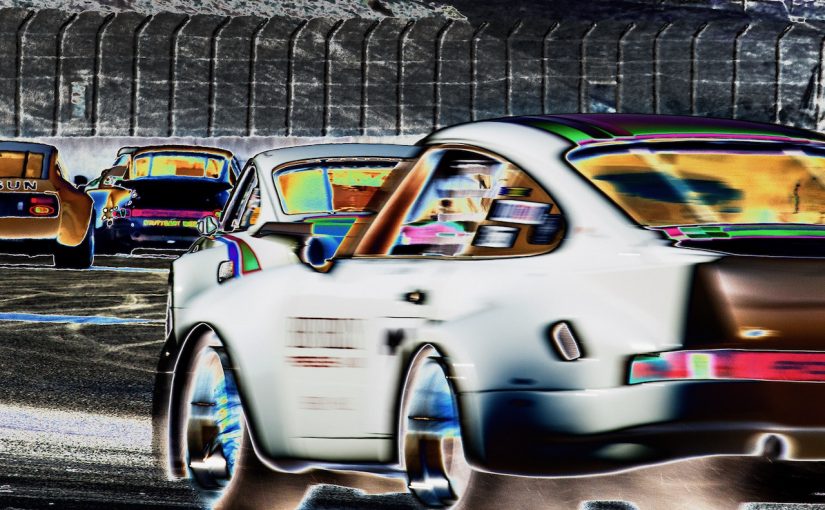 Jim Palam set his GPS and focus on WeatherTech Raceway Laguna Seca, as he headed out into a dense morning fog to capture the action and excitement of Monterey Car Week’s largest event – historic car racing at MONTEREY 2021: ROLEX MOTORSPORTS REUNION! 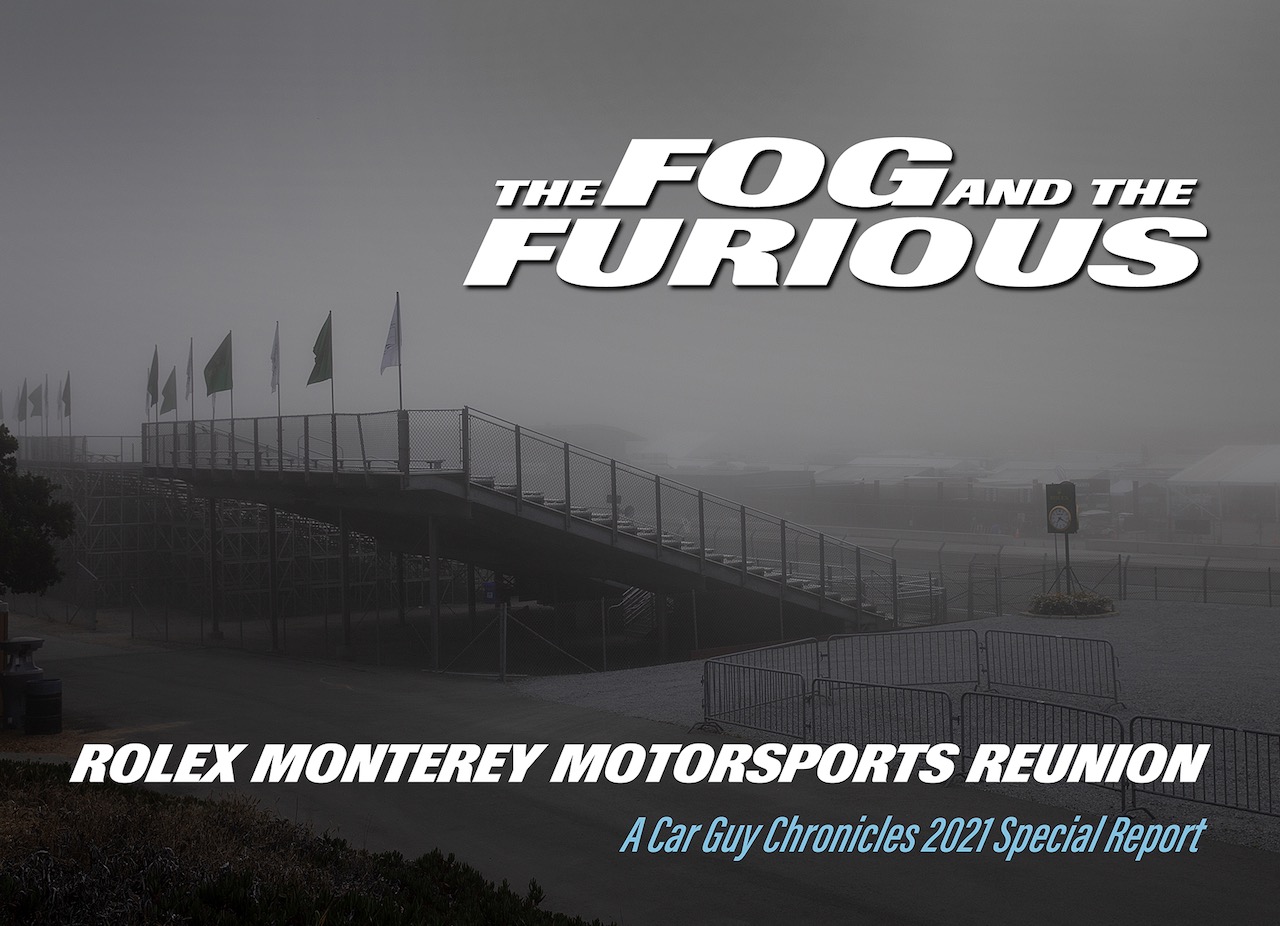 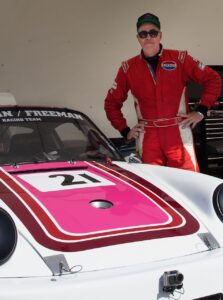 I consider myself a good driver but I was unusually nervous heading into a heavy fog shrouding the long, ridgetop South Boundary Road that leads to the admissions checkpoint at Laguna Seca. The unforgiving fog was one thing, but the realization that I had left my camera backup batteries and charger at the motel I had just checked out of was a foolish mistake – and now there was no turning back. I had just 15 minutes to make it to the Photographer’s Safety Meeting where I’d pick up my wristband and track-issued photographer’s vest. Without these items there would be no trackside shooting or hot pit access.

The good news was that I wasn’t the only media person running a little behind as the fog had slowed the start-up activities for the day’s racing. By 7:45 AM however, I could hear what sounded like the crackle of a twin-turbo running some hot practice laps on the 11-turn, 2.238-mile road course. By 8:15 AM I was on a volunteer shuttle that brought me up to turns 8 and 8A, the famous Laguna Seca Corkscrew. It was now time to shoot and I had to make do with one battery.

Heading down from the Corkscrew I ran into comedian, filmmaker, collector, driver Adam Corolla in the Paddock area. He was kind enough to pose for a photo, above, right, beside one of his Paul Newman racecars – ’74 Porsche 911S. Corolla and his Newman 911S come out of Turn 4, below, in hot pursuit of a mid-field position in a Group 3A race. This is the car that was driven by Newman and Freeman in 1977  at the 12 Hours of Sebring. 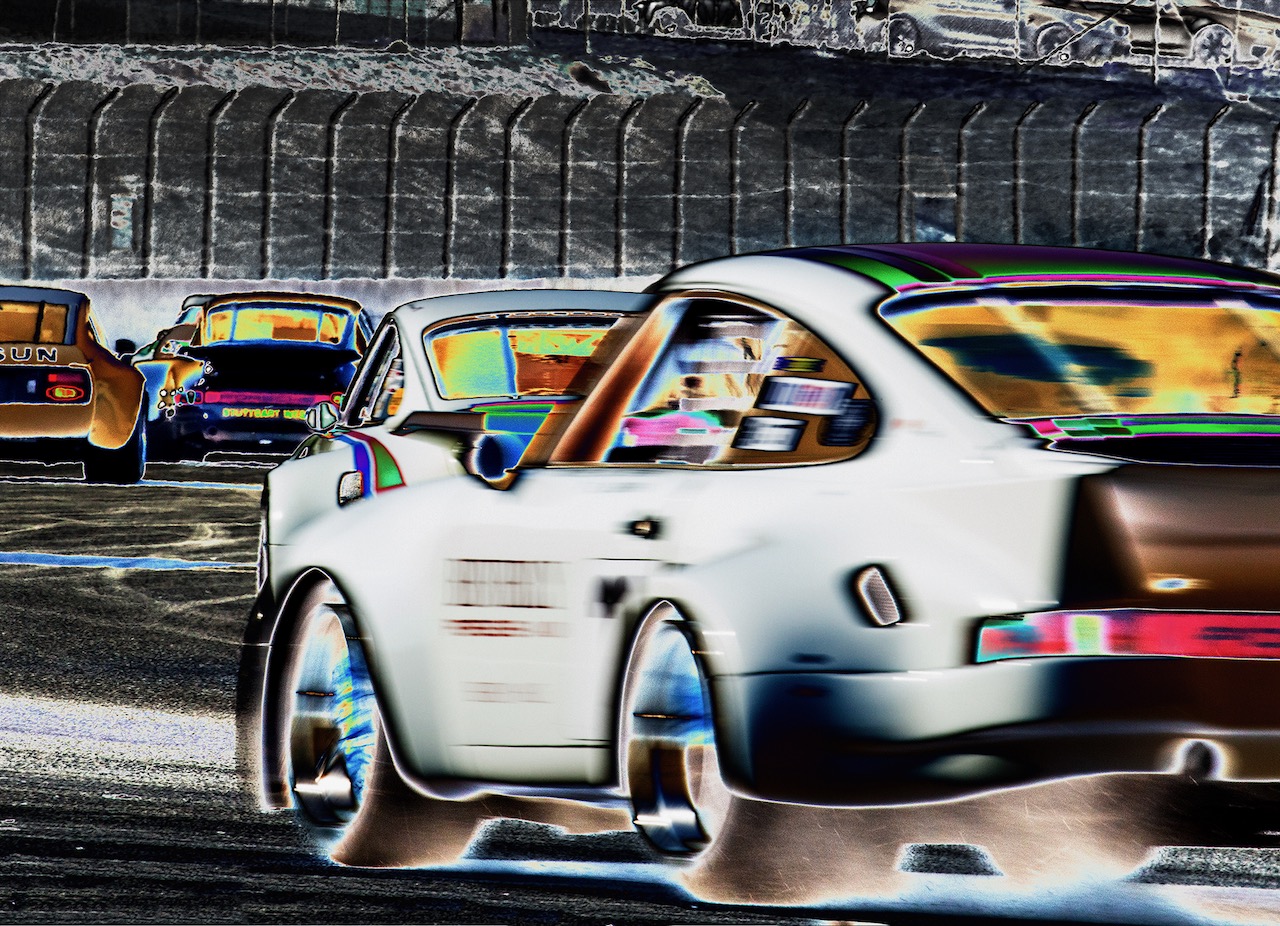 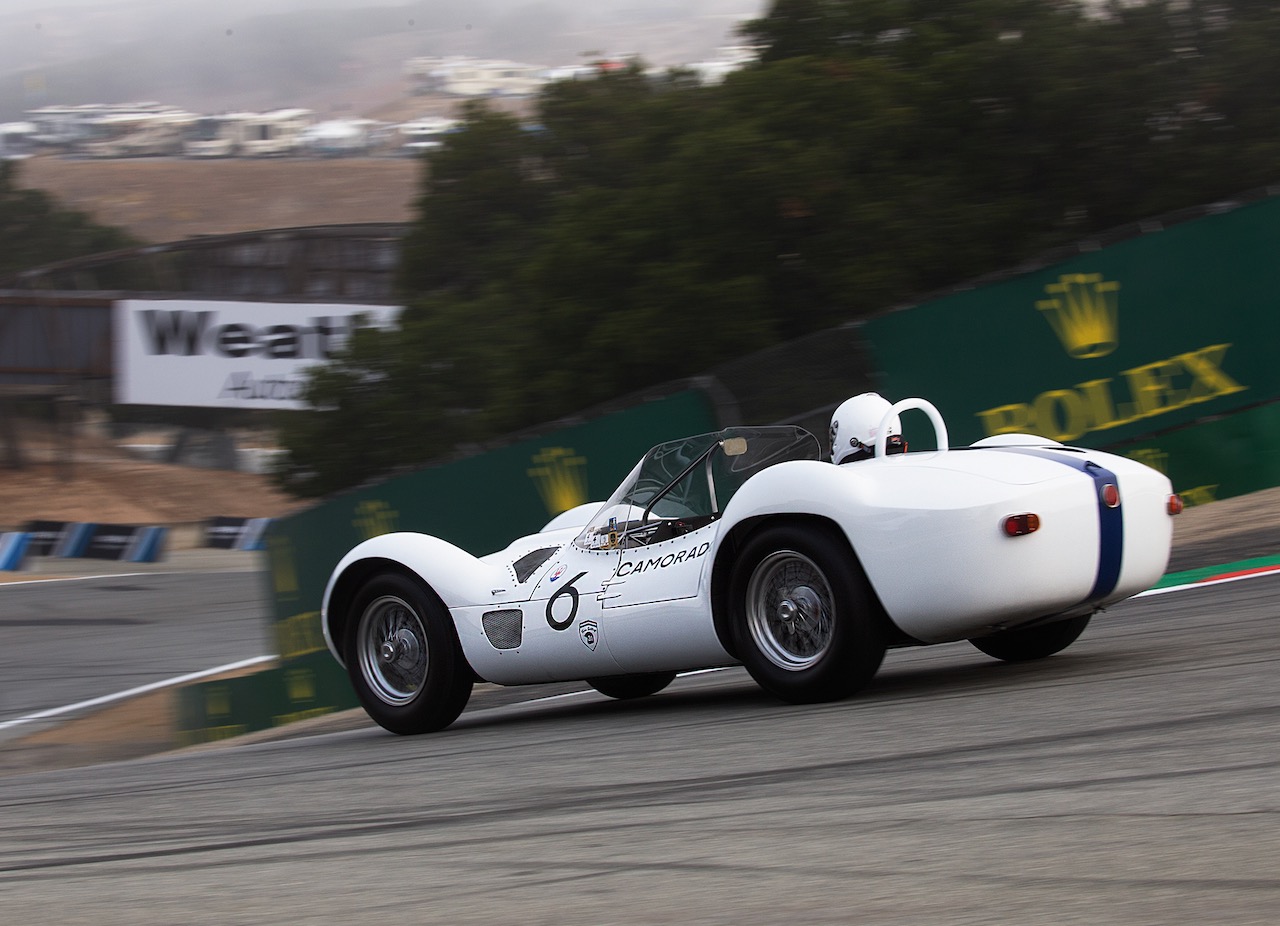 The Corkscrew is a dive-bombing, roller-coaster series of quick turns featuring a blind crest and a 59-foot drop in elevation beginning in Turn 8 with a quick exit at Turn 8A. In other words, it’s one of motorsports’ most challenging and thrilling turns – and the perfect backdrop for this rare ‘60 Tipo 61 Camoradi Birdcage Maserati. 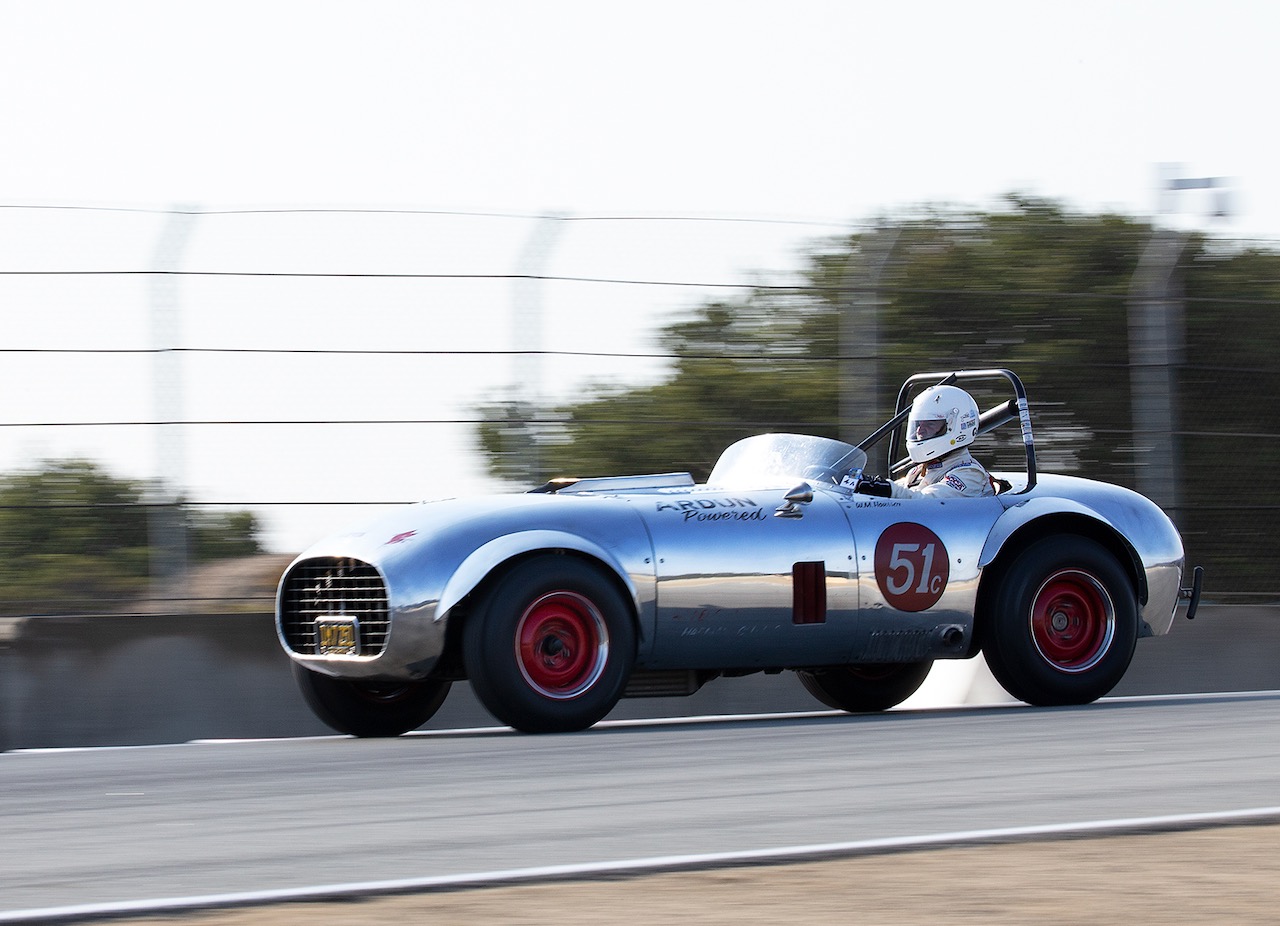 Stu Hanssen blasts down the Rahall Straight, seconds away from entering the infamous Corkscrew, in his Group 4A ’51 Baldwin Special. Powered by an Ardun-converted Flathead, it’s the same car he’s driven to Cars & Coffee gatherings in the Santa Ynez Valley area. A loose Panhard Bar slowed him down in the turns, but he still finished a very respectable Sixth. 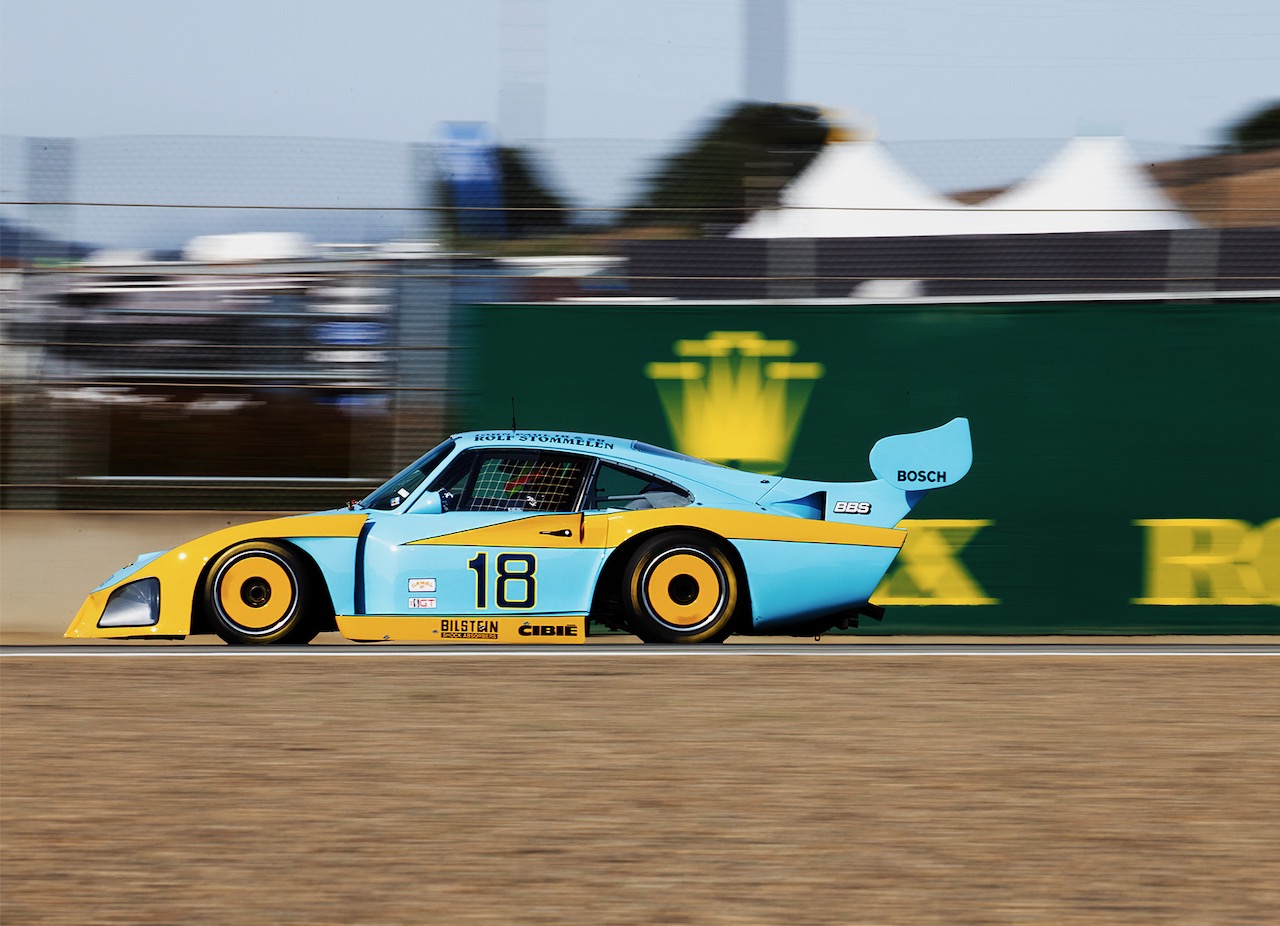 Remember that early morning twin-turbo practice run I heard? Well, here’s the beautiful noise-maker. Turns out driver Zak Brown was giving the viewers of The Racer Channel some helmet-view thrills from inside Car No. 18, as he repeatedly tickled the redline during a spirited run around a foggy Laguna Seca. I caught him blasting the flat nose Porsche 935 JLP-3 later in the day out of Turn 4. 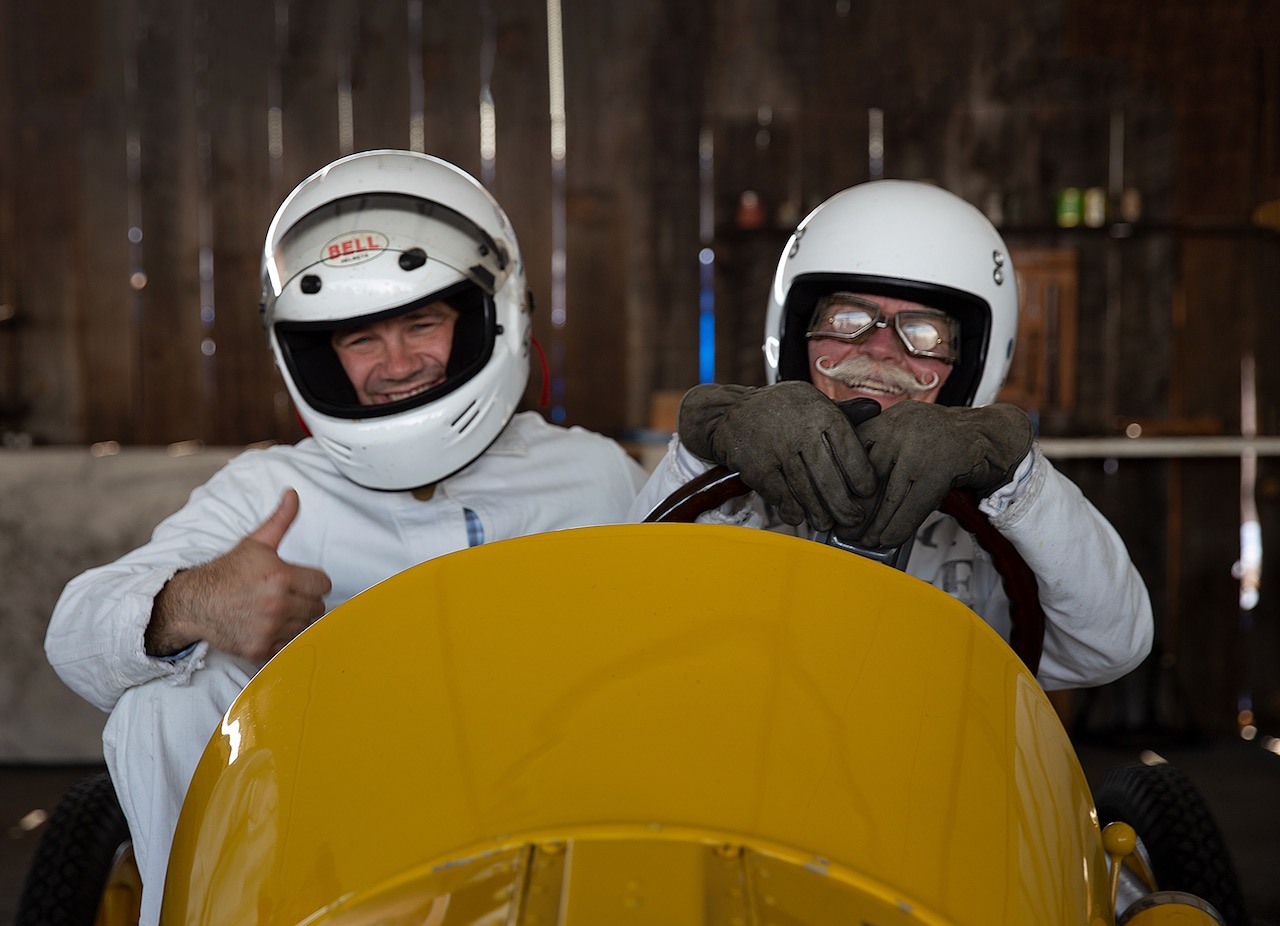 Race Time! A mustachioed Ragtime Racer and his mechanic are all smiles as they get ready to hit the course for Saturday’s Ragtime Racers exhibition for Historic pre-1920 racecars. Fans loved watching the procession from the Paddock area to the track where they huffed and puffed their way over the hills, down the straights and through the 11 turns of Laguna Seca! 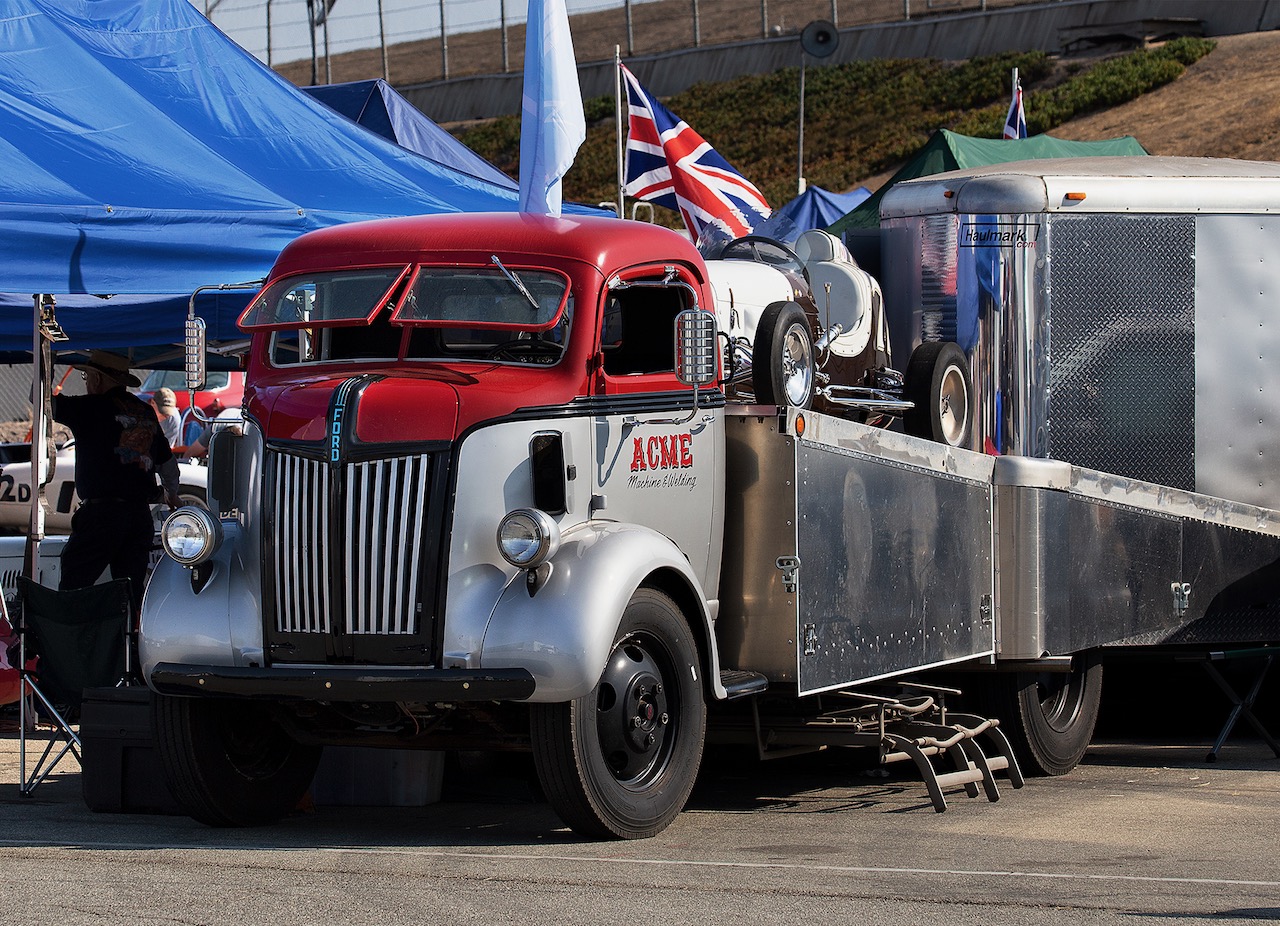 There’s no racing on the track until you get your car to the track. Back in the 1940s that may have been accomplished on the back deck of a sturdy Ford COE racecar hauler like this modified beauty on display in the Paddock area. 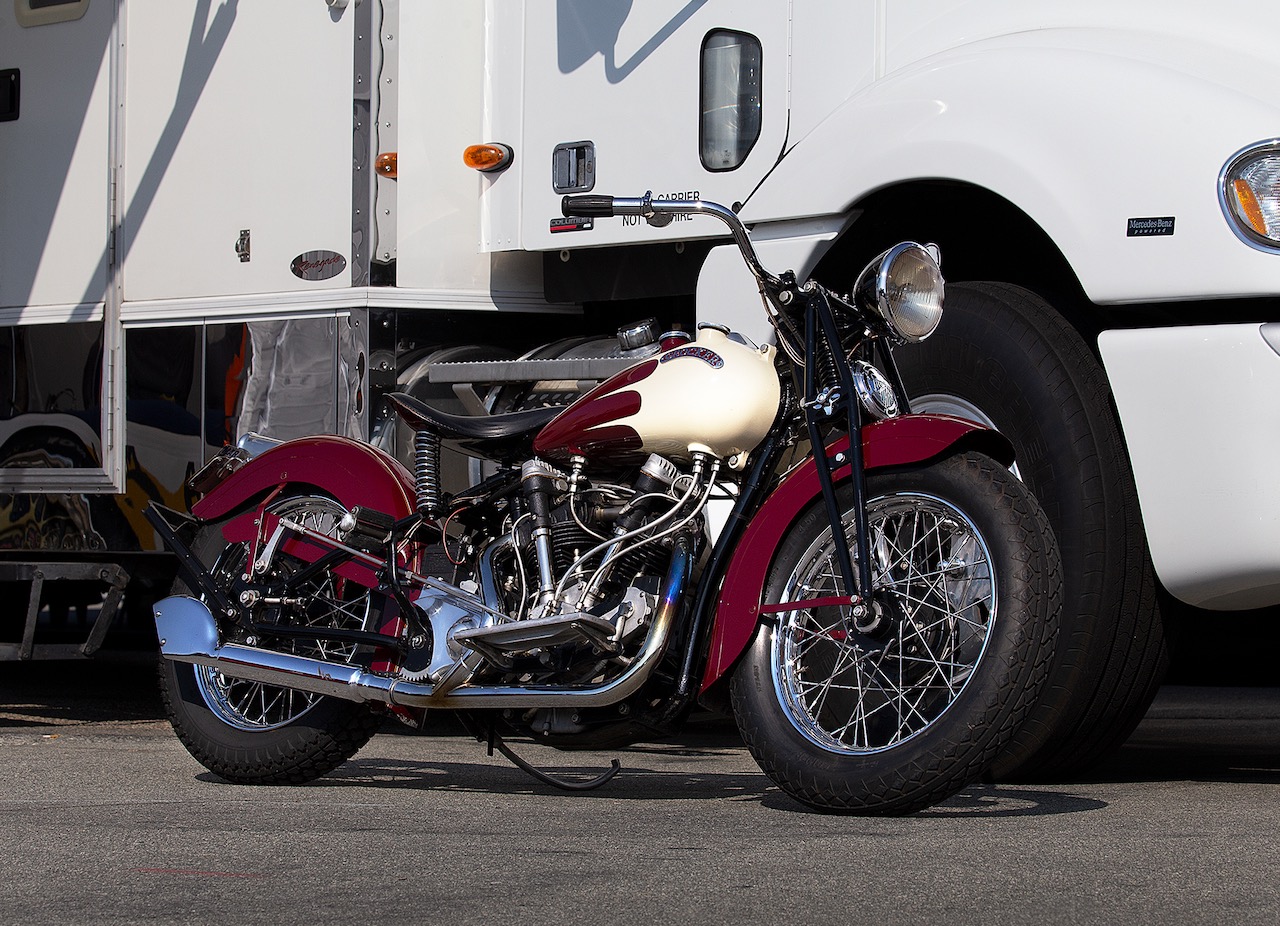 Racers are passionate about everything related to motorsports, and they often bring more than their enthusiasm to the track; they also tend to bring their “stuff” – like this ­pricey ‘40 Big Tank Crocker motorcycle. 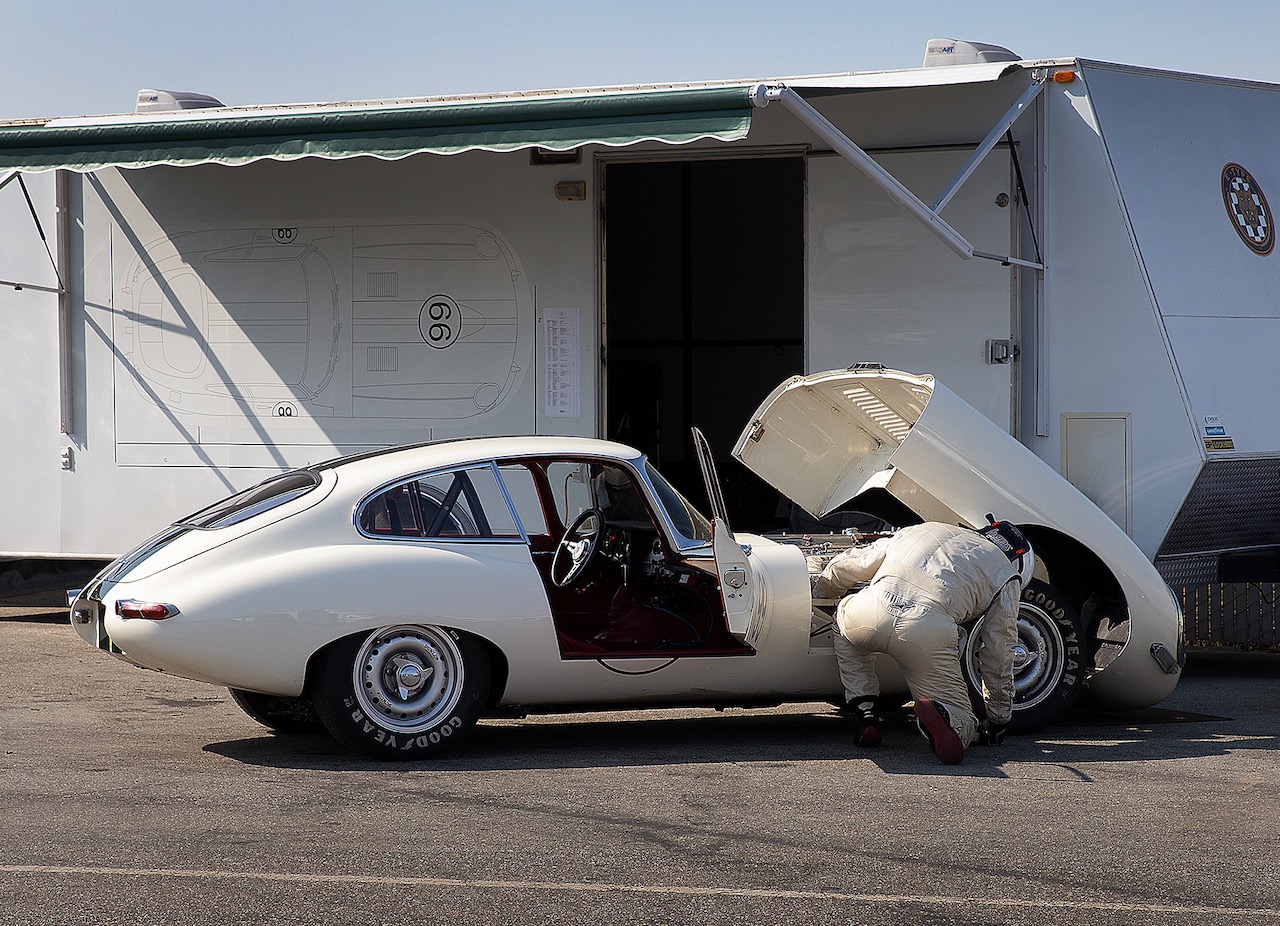 Motorsports racing is typically a heavily-funded team effort, but the nice thing about the Rolex Reunion is that you can be a privateer and still have a blast. Here a racer makes a last-minute adjustment on his beautiful Jaguar E-Type Competition Coupé. 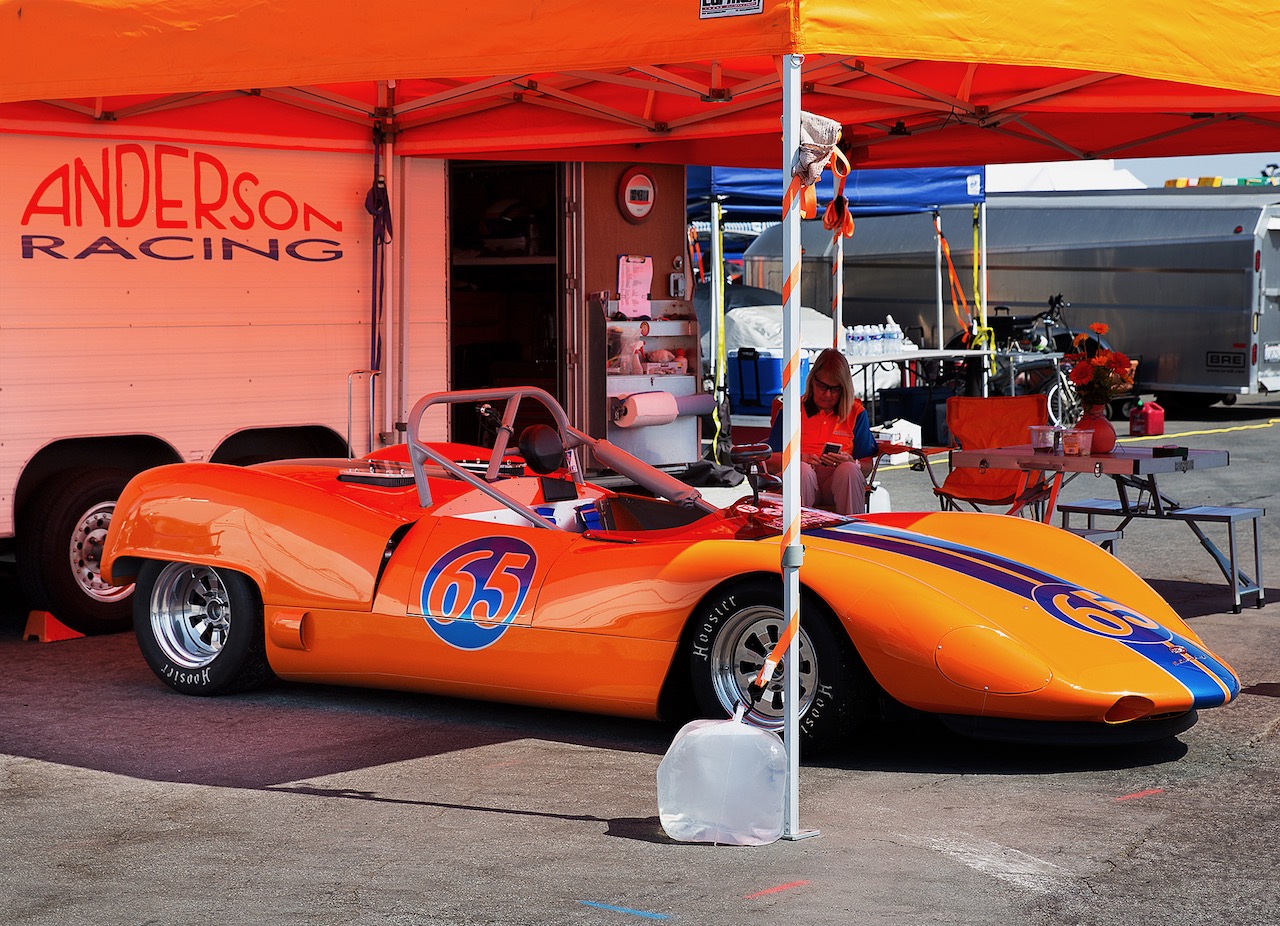 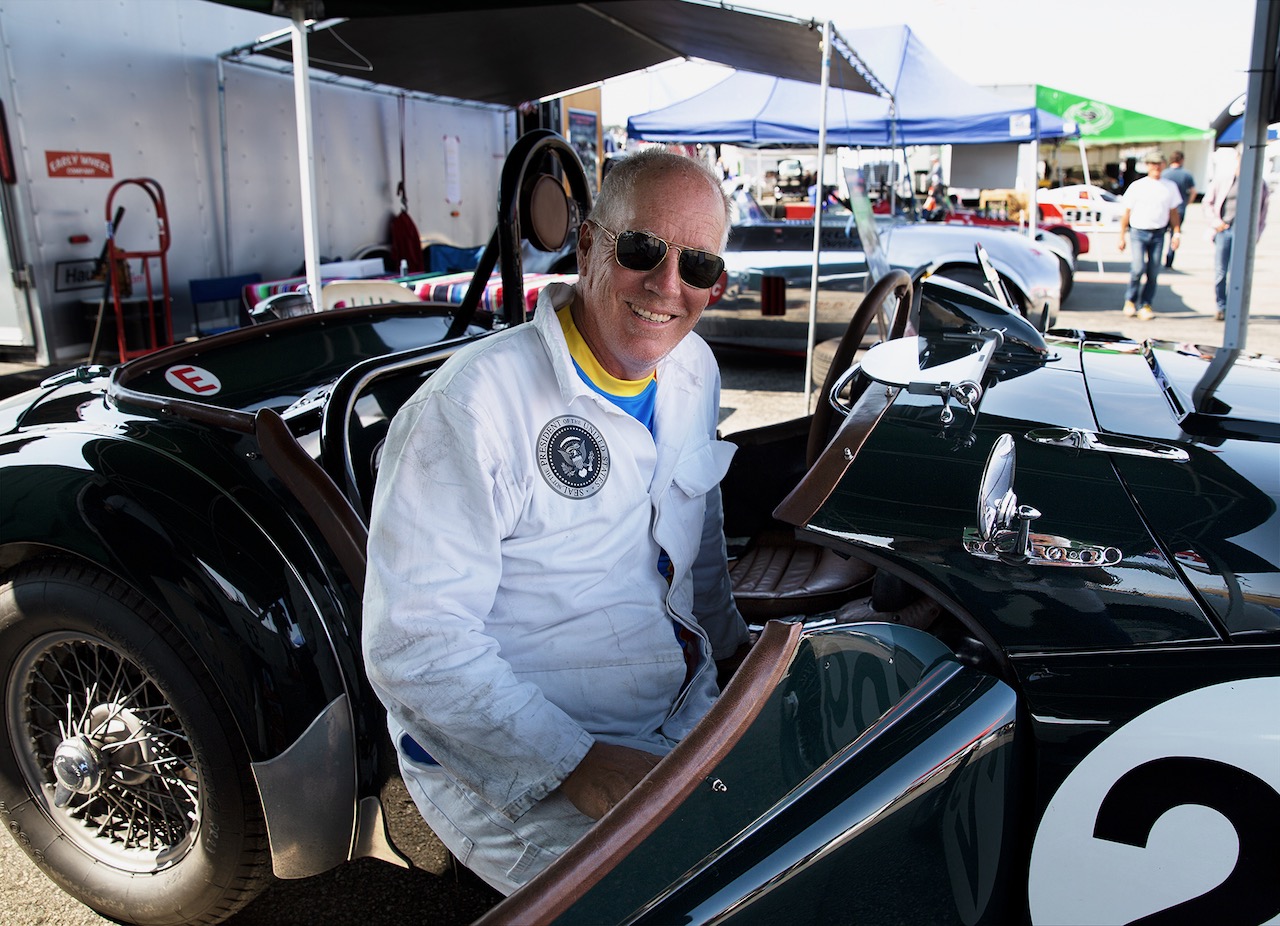 POTUS in the Paddock! What a surprise to see President Biden readying his Triumph TR2 at Laguna Seca! OK, this really isn’t Car Guy Joe; I added the Presidential patch just for giggles! 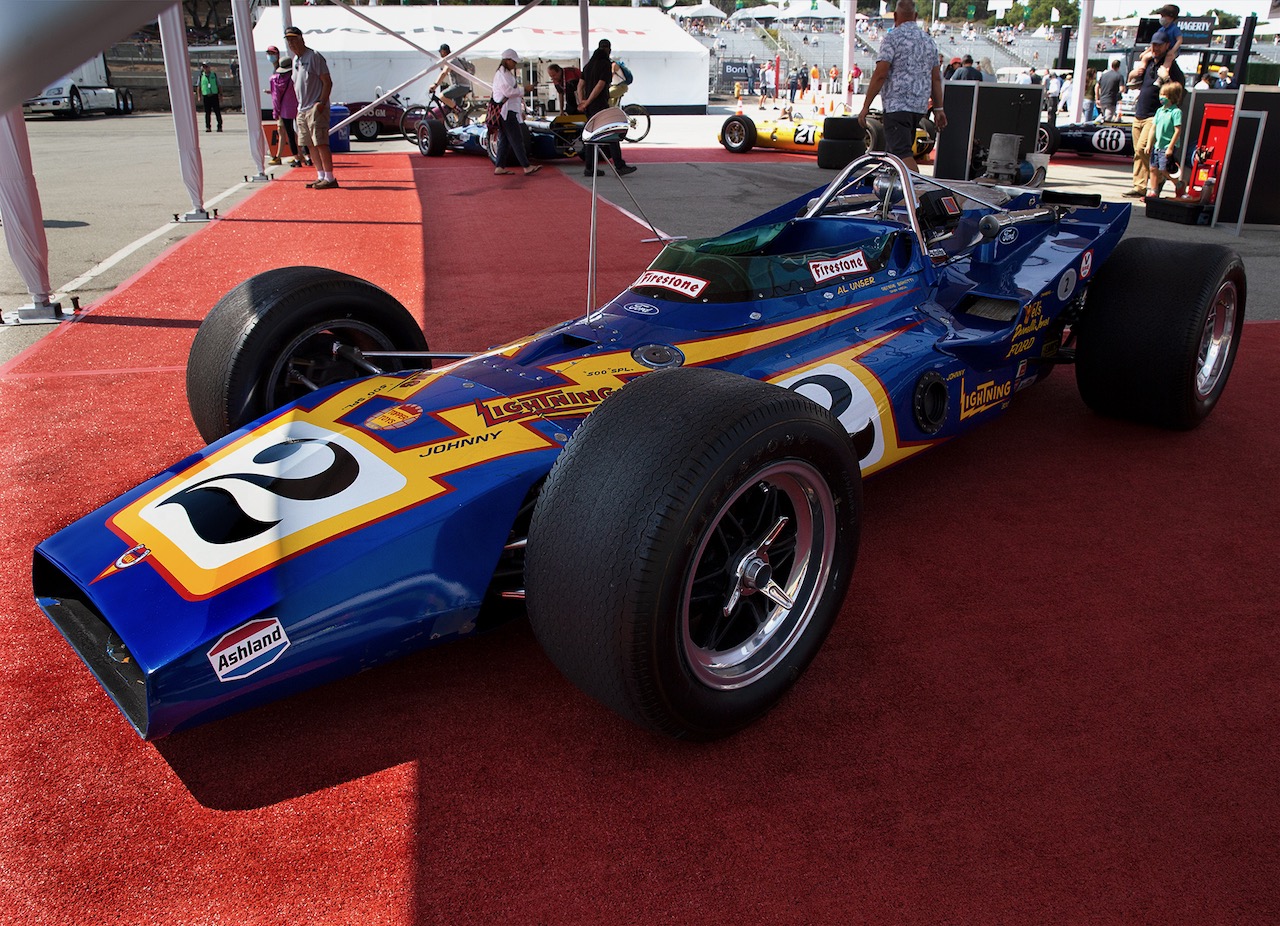 One of my favorite racecar liveries is on the famous Al Unser driven Indy 500 Lola. The bright yellow Johnny Lightning bolts on deep candy blue paint is electrifying. Thrilled to see this legend at the Reunion! 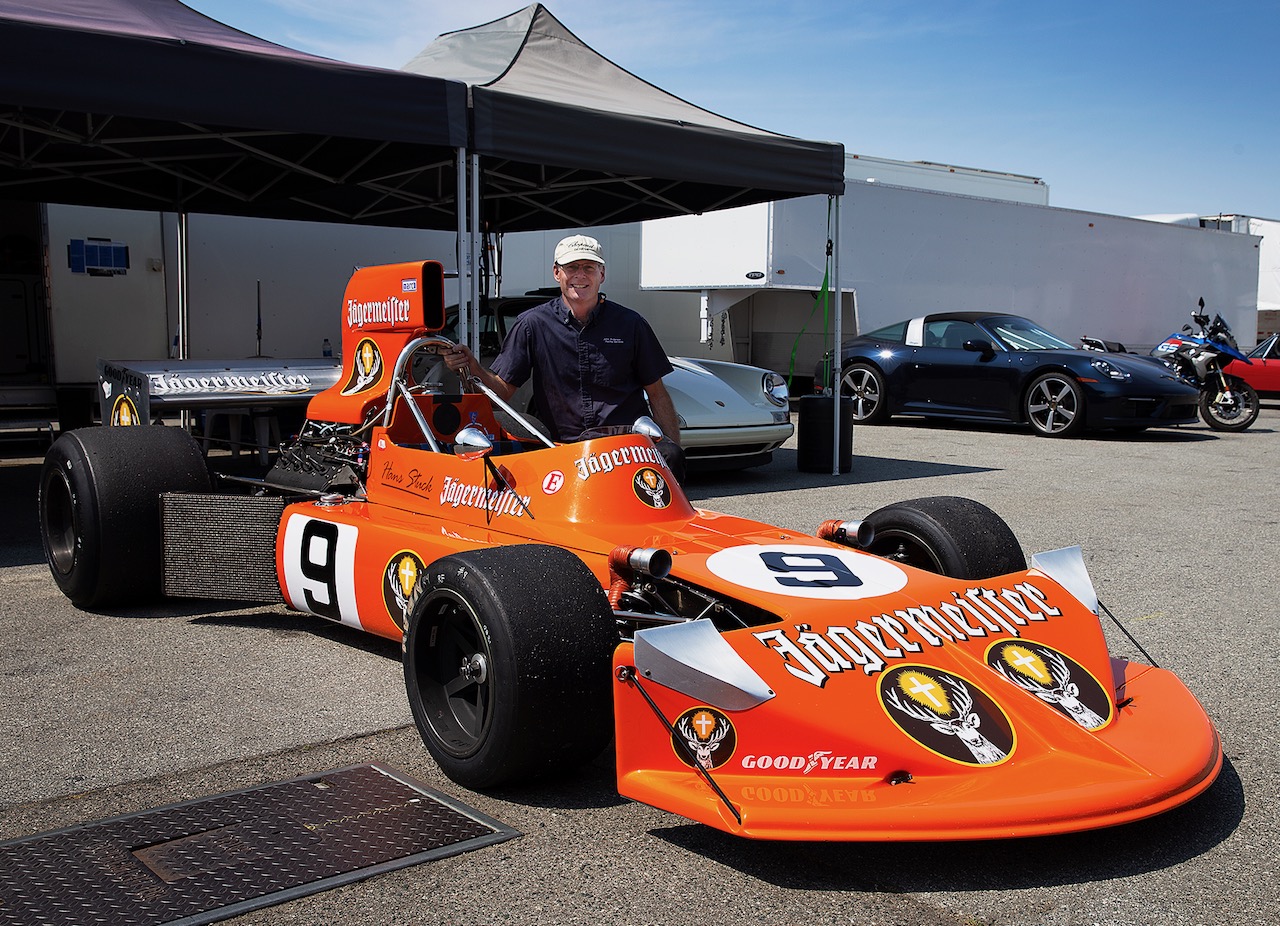 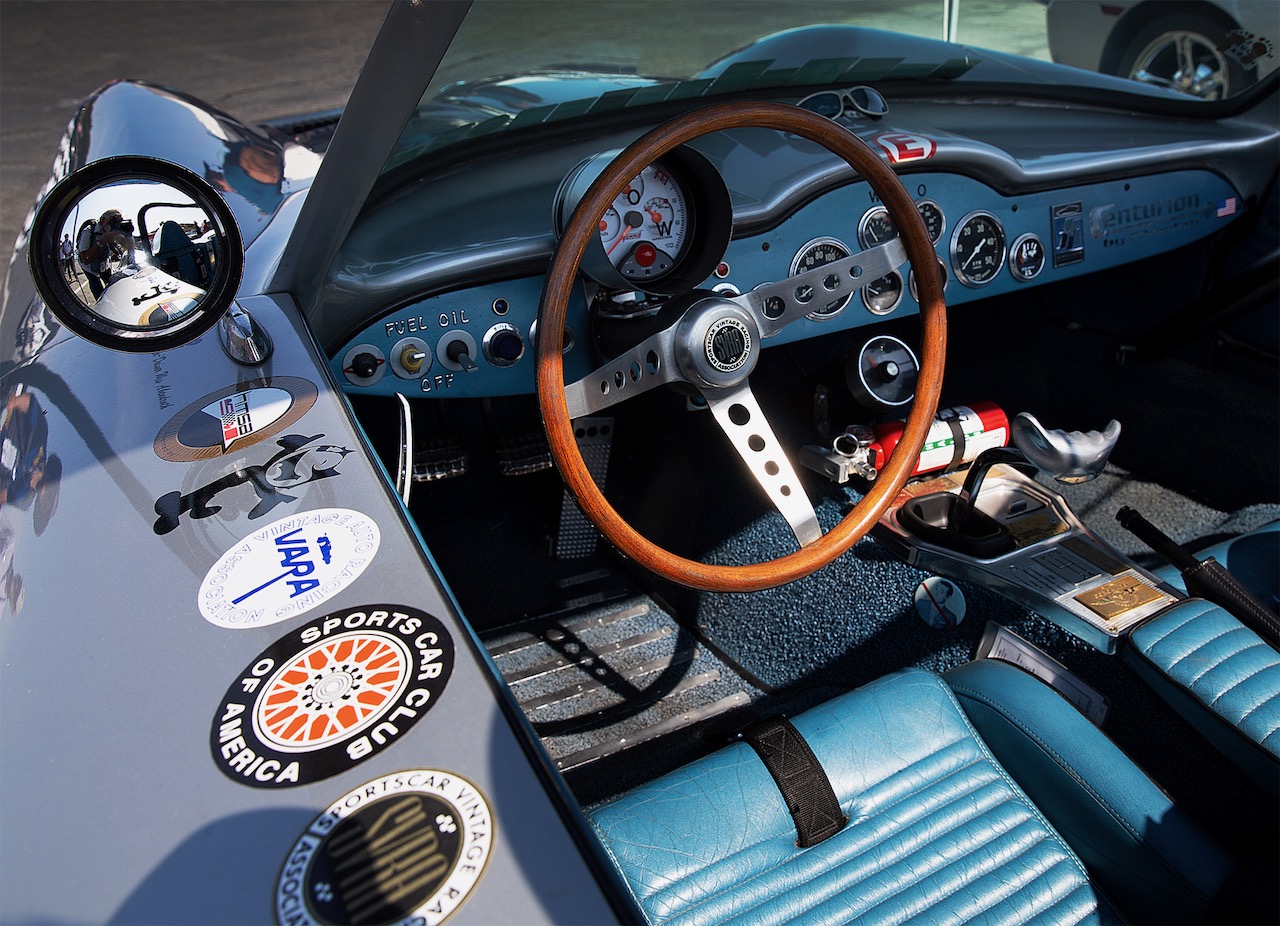 This is the interior of the rare Car No. 33 Centurion competition roadster. Its Sting Ray-influenced body was designed by Bud Goodwin and built by Fiberfab Corp. in Sunnyvale, CA in 1964. The original Sting Ray Racer was designed by Peter Brock in 1958, years prior to production ’63 Corvette Sting Rays. 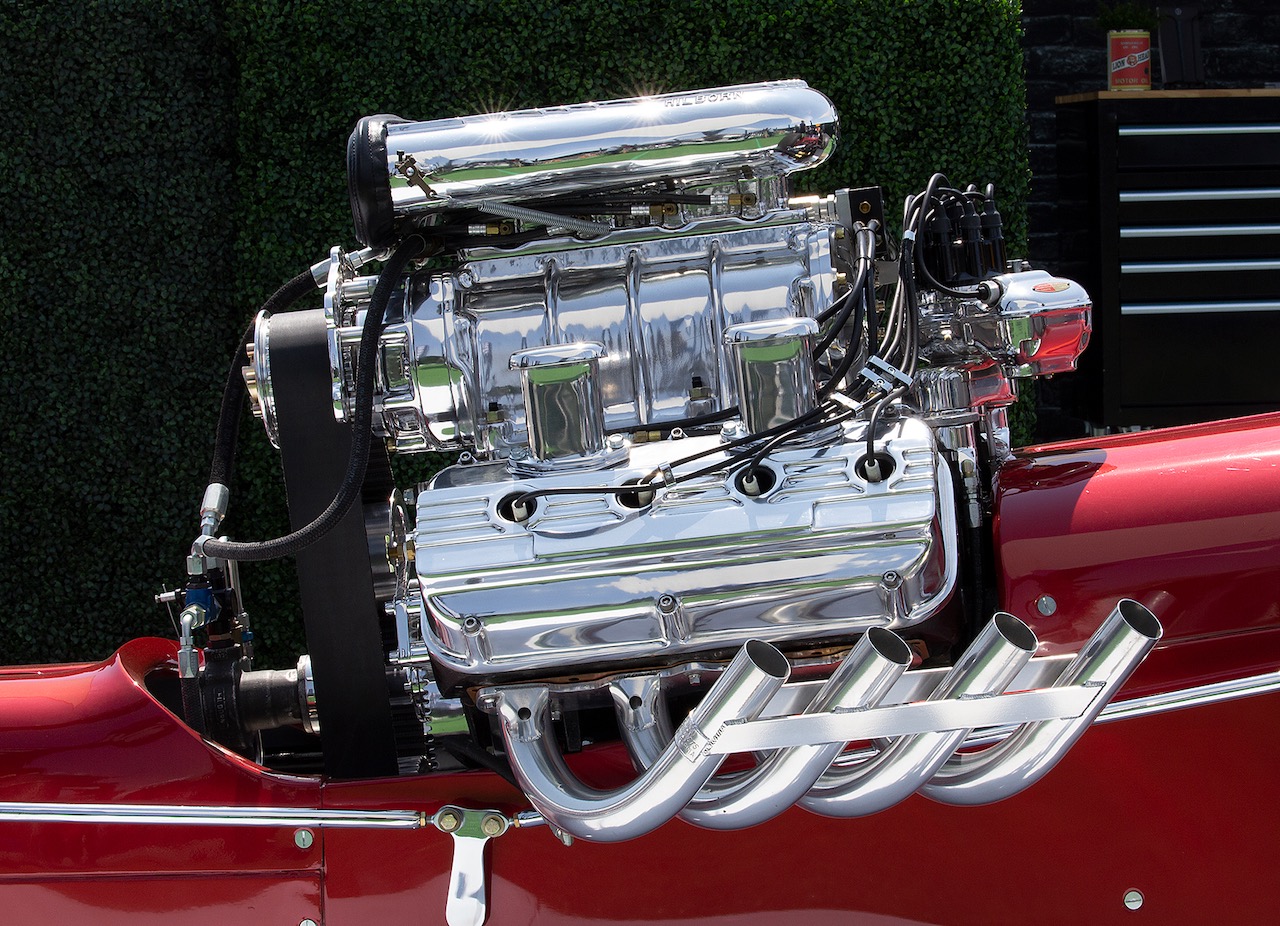 No, this isn’t a motor that would have powered any of the historic cars at Laguna Seca, but it was on trackside display for its historical significance. This is the brutish 2,000 horsepower supercharged Chrysler Hemi that sits forward of the driver in the famous ‘64 Fuller/Roberts Starlite III Top Fuel Dragster. Lots of Golden oldies at  MONTEREY 2021: ROLEX MOTORSPORTS REUNION! 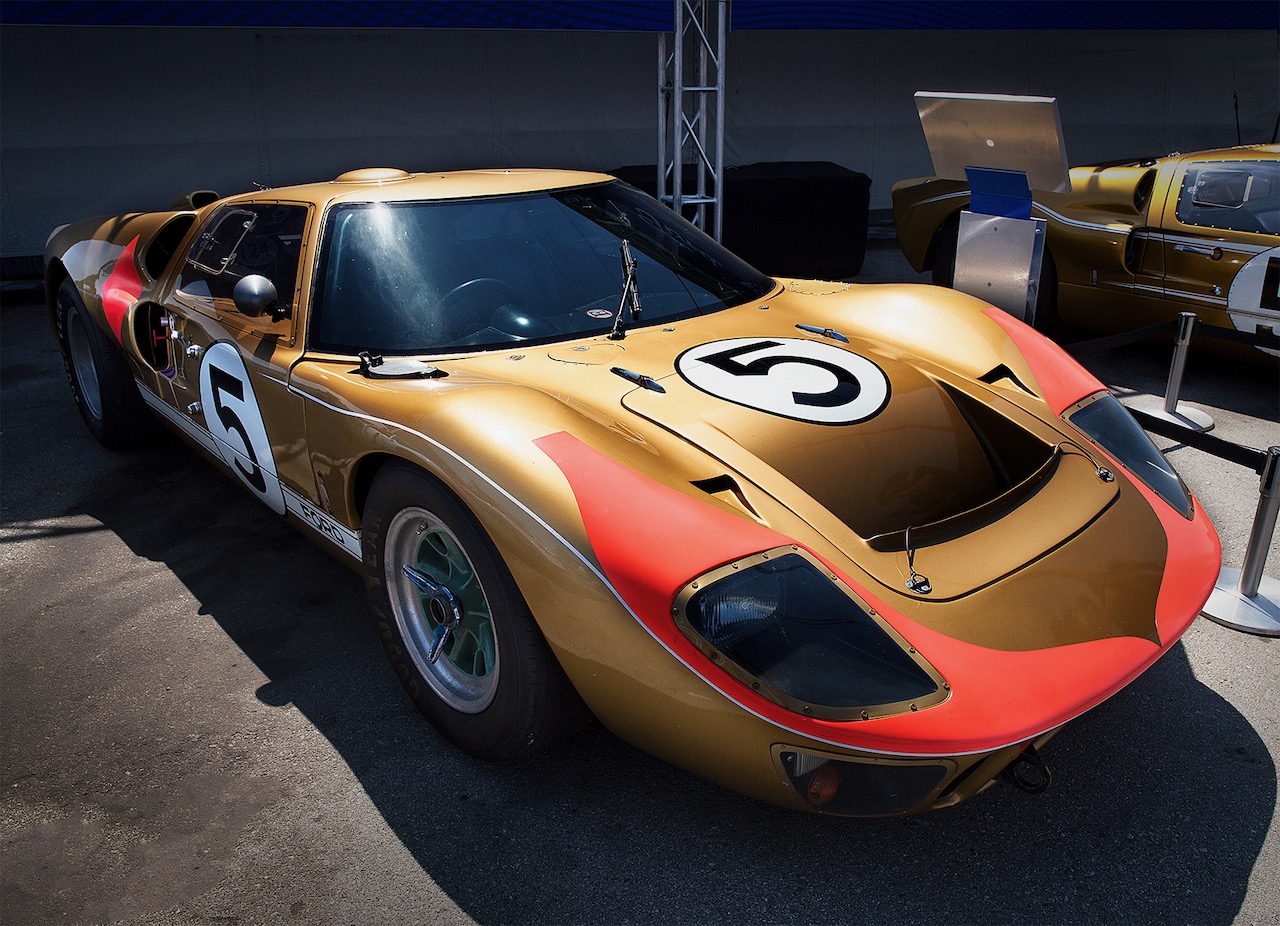 Ford delivered an impressive display of style and performance both on the track and in the Paddock viewing areas. The brought a fleet of historic racers – including the legendary Holman & Moody GT40, P/1016 that finished Third at Le Mans in 1966, from the Shelby-American Collection, Boulder, CO. It’s owned by the Miller Family Foundation. 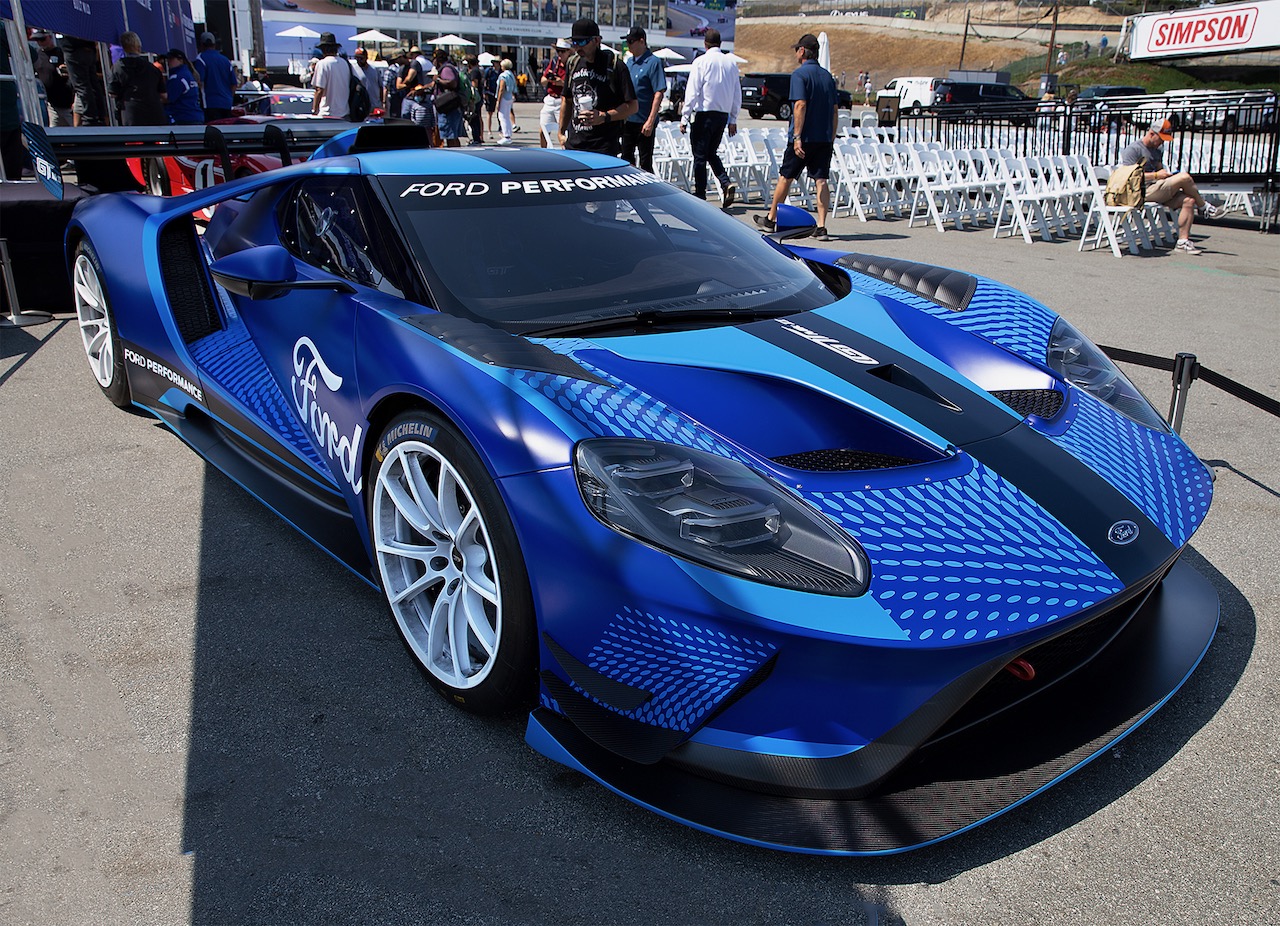 During my limited time at MONTEREY 2021: ROLEX MOTORSPORTS REUNION! I marveled at our rich motorsports history and wondered what its future is going to look like. As I photographed this current Ford GT, I kept thinking: The future might be hybrid, it might be electric, it might be virtual, or it could even be autonomous? Whatever it evolves to I’m pretty sure it will continue to be a shared participant experience, and it will continue to be exciting!

Check out MONTEREY 2021: ROLEX MOTORSPORTS REUNION! and a calendar of events at Laguna Seca @https://www.co.monterey.ca.us/government/government-links/weathertech-raceway