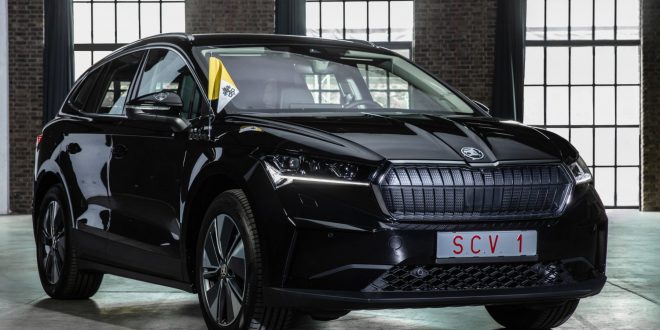 Pope Francis is being treated to zero emissions travel courtesy of specially converted Skoda Enyaq iV EVs during his visit to Slovakia.

The two pure electric SUVs, plus two smaller Karoqs, were adapted according to the Vatican’s wishes.

To make it easier to see the Pontiff, clear glass windows in the rear of the vehicle have replaced the standard tinted side windows.

Chrome standard holders for the Vatican flag are mounted on the front wing of the passenger side and the official logo of the papal visit can be seen on the exterior mirror housings.

To make exiting the car more comfortable, an additional handle was also added. Additionally, the cars were all painted in black metallic and have black interiors.

This is the second time the head of the Catholic Church has travelled in vehicles from the Czech car manufacturer. Skoda previously provided four Rapid Spacebacks for Pope Francis during his two-day visit to Ireland as part of the World Meeting of Families in Dublin in 2018.