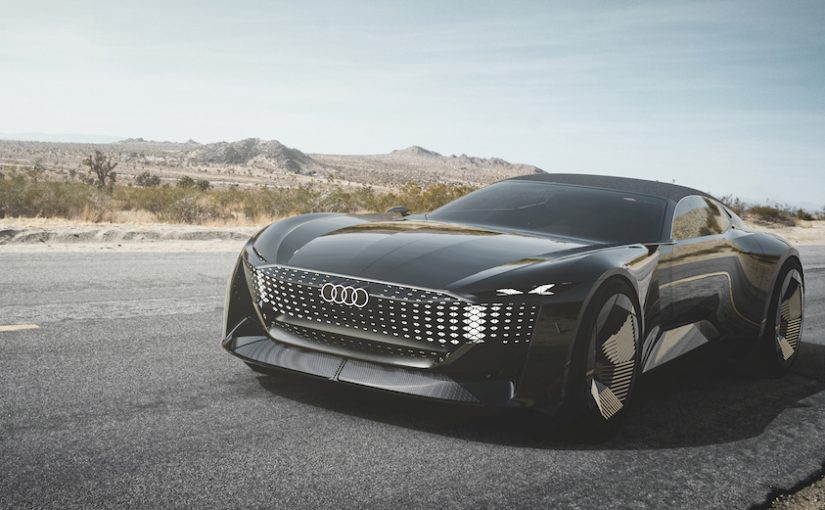 A futuristic black car racing across the desert on a lone strip of two-lane blacktop. The man behind the wheel isn’t driving. In fact, there isn’t even a steering wheel. Future car’s in autopilot mode. The man speaking commands, eyes on a dash layered with screens, an artificial voice answering. And then at the press of a button, future car changes. Wheelbase shrinking. Steering wheel and pedals folding into position. And the man takes control. No, we aren’t watching Knight Rider, but gazing upon Audi’s Skysphere roadster concept.

“Welcome to the future,” Head of Audi Brand, Henrik Wenders says, standing before a breathtaking electrified grand tourer that turns into a sports car. Literally. Skysphere, the first of three forthcoming Audi concepts, shortens its wheelbase 250mm (9.84 inches) when switching between GT mode and Sports mode. And that’s only the tip of the technological iceberg. But let’s back up a little bit. Audi describes Skysphere as, “more than a car. More than a concept car. More than just the hardware.” Audi imagined this future Bond movie title of a concept roadster at the Audi Design Studio in Malibu, California. (That’s just north of Los Angeles along the Pacific Coast Highway for those less familiar.) Audi Design Studio works fully digitally — no molding or sculpting. Digitized concepts are then presented to Audi execs in Germany via virtual reality.

The goal? Pay homage to the 1937 Horch 853 roadster with a modern twist. Audi calls it “progressive luxury” (despite, you know, being based on a vehicle made during the Nazi regime). In this all-electric future, the Skysphere offers Level 4 Autonomous driving in its GT mode. (That’s the level where the car does everything.) Here, passengers experience more legroom, an open-top or soft-top view, and a front dash adorned with an edge-to-edge screen. Sure, Level 4 autonomy doesn’t exist yet, but Audi conceptualizes Skysphere GT mode as your luxury, chauffeur mode for commuting or long drives. In this world, Skyphere knows when and where you want to go. And how to find its own charging.

But happen upon a lovely stretch of road where you want to take command and Skysphere transforms.

The 17.02-foot GT shrinks into a 16.2-foot sports car thanks to Skysphere’s variable wheelbase. A steering wheel and gas/brake pedals appear too. Then screens shift and the passenger moves rearward to give the cabin more driver-focus. You’re now ready to race this 465 hp EV to 100 kph (62.14 mph) in four seconds. Not earth-shattering numbers, I know. Here’s why: Audi forgoed the e-tron GT’s mutli-motor AWD system for a one-motor rear-wheel-drive setup inspired by mid-engine vehicles. With the electric motor in/as the rear axle, 70 percent of the batteries sit behind the driver, with the other 30 percent placed in a tunnel between the passengers. This gives Skysphere at 60 percent rear-weight bias for added traction during acceleration. In terms of range, Audi estimates 500km, or about 310 miles, per charge.

In short, we have a smart, interactive futurist sports car that can drive you around transforms for hot pursuit mode with the touch of a button. Look out, ’80s kids, your chance to bring Knight Rider to life is nearly here.

What do YOU think about Skysphere, dear reader?
Let us know HERE in the forums!

Now onto my two pennies worth of opinions, which I’ll separate into three categories.

First up, DESIGN. Visually speaking, it took me a few minutes to get used to Skysphere. When I first saw its teaser silhouette, it screamed modern interpretation of a 1930s roadster made to cruise around in an Art Deco world. But the actual concept vehicle is a touch on the chunky side.

Not bad, mind you. Just more angular when I was expecting something a little more swooping and sculpted.

Still, after diving in, out, and around Skysphere, the more I see, the more it impresses as something new and futuristic, but also classical and pure Audi. From the light-show front and tail ends with integrated sensors and comm devices to the rearward-opening doors, Skysphere does everything a concept should do. It dreams of a future while evolving and evoking the company’s current design language. Also, I’m totally sold on the light-infused digital grilles that evoke Audi’s last design decade. However, in terms of PERFORMANCE, Skysphere is less impressive. I know it’s easy to get sucked into figures and spec sheets and that’s a waste of time. Especially for something that’s not going into production. Still, I’d argue a 4-second 0-100 kph rear-wheel-drive-only drivetrain is less evocative than the already-in-production RS e-tron GT. I don’t mean to knock Audi’s accomplishments, of course, but how does a lesser vehicle inspire us. How does a rear-wheel-drive vehicle fit into the Audi Quattro ethos? Plus, Skysphere aims to be a split personality vehicle… in a world where Level 4 Autonomy doesn’t actually exist.

Give Audi credit for dreaming, mind you. Give them props for thinking Level 4 autonomous chauffeuring might actually be a reality before the end of this decade. (I have a few doubts, personally.) But, in my head, if a concept car can’t actually demonstrate a technology, it just seems more like a PowerPoint demonstration on wheels than a technology showcase. (You know, give me a rocket car at the World’s Fair!)

This last bit, to me, means the most.

I know many enthusiasts loathe the end of the internal combustion engine. The sounds. The smells. It’s almost as if ICE-vehicles are alive, cheering us on as we push them to their limits. And a good chunk of that immersion evaporates when we switch to electric.

But Audi wants to keep enthusiasts at the focus.

Sure, they’re going to make quieter, more efficient vehicles. They’re going to chase a world where our cars drive us — hopefully preventing distracted driving accidents and enabling more relaxation and productivity. But Audi isn’t going to take the fun out of their vehicles (if you want that). And with designs like Skysphere, I can’t wait to see what Audi dreams up and forges into reality. Mostly so I can finally pretend to be… a man who does not exist. A young loner on a crusade to champion the cause of the innocent, the helpless, the powerless, in a world of criminals that operate above the law. 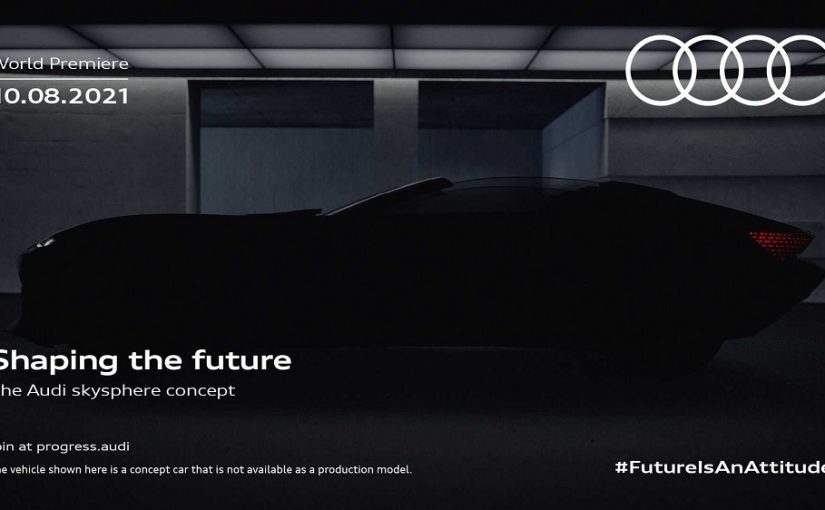 Car design is entering exciting new territory — and Audi’s skysphere concept is a glimpse of what to expect.

Last month, we wrote about the hat trick of wild concept cars Audi is set to release over the next year. And now, we know the wraps will come off the first design exercise on August 10th. Dubbed the skysphere, the darkened profile in the teaser shows a long hood, space for two, an open top, and some gloriously pointy hindquarters. Given that this is a concept car, and not destined for production, pesky little things like pedestrian safety regulations aren’t really a concern.

In the video below, Audi senior vice president Henrik Wenders and design chief Marc Lichte share that the inspiration for the futuristic ride came from the gorgeous Horch 853A. If you’re looking to create a GT masterpiece? That’s hardly a bad place to start, but in keeping with Audi’s pivot toward electric vehicles, all the concepts will be pure electric. So the long hood is a bit of puzzler. My guess is that the car rides on a skateboard-style chassis with motors at each corner, which would leave the space free for passenger luggage.

That’s presuming it’ll be able to move under its own power, of course, which many concepts don’t. What will presumably function are the trick banks of lights in the front fascial and rear section. Upon the reveal, I’ll expect to see some shock and awe from these set ups, as lighting is one of the next frontiers in automotive design. But what I’m really stoked to check out is the cabin, which will have the capability to transform from a cockpit to a lounge, where drivers can either control the machine or let the autopilot take over.

At this point, the skysphere concept is still largely a mystery. But it will certainly speak to the challenges and opportunities facing the folks who’ll design the next generation of personal transport. Because in the next few decades, the rulebook that’s defined car design is going to be thrown out the window, and we’re all going to get a chance to see what engineers and artisans can do with a truly clean sheet design.

Check out the video to for more about the philosophy behind this concept — and stay tuned for the reveal next month!