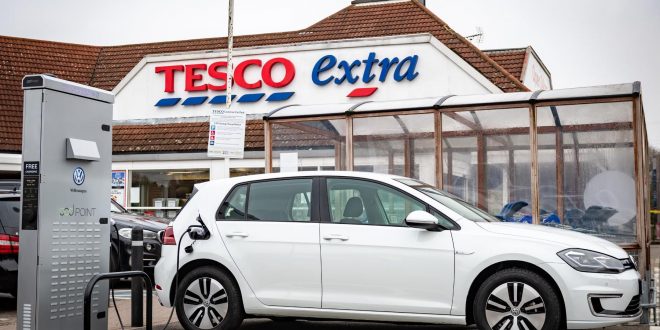 Tesco has topped the list for supermarkets providing charging for electric car owners, according to an independent analysis of EV facilities across the UK by electric cars website Electrifying.com.

The supermarket, in partnership with Volkswagen and Pod Point, has installed charging points across 400 of its stores across the UK.

Overall, almost half (45 per cent) of its total stores, not including smaller express sites, have charging.

Morrisons is the second-best supermarket for EV owners, with just over 40 per cent of 497 stores offering customers the ability to charge, while nearly one in five (19.71 per cent) Asda locations provide at least one place to plug in.

But electric car drivers who shop at Sainsbury’s face a lottery when it comes to charging their vehicles, with fewer than one in 10 (7.2 per cent) of its stores currently providing charge points for customers.

While Sainsbury’s came out bottom of the pile, Aldi was only marginally better with 10 per cent.

Lidl customers have a slightly better chance of finding a store with at least one charge point, with its hit rate reaching 15 per cent.

“Congratulations to Tesco and Morrisons which have both invested heavily to provide customers with good charging facilities. We’d love every supermarket site to offer this, but we aren’t there yet,” said Ginny Buckley, founder of Electrifying.com.

“We expected more supermarkets to be doing better, but it’s still great to see how some of them have recognised that offering shoppers reliable car charging is not only good for business but will also help give the nation confidence to make the switch.

“With electric cars surging in popularity and ambitious government targets to ban the sale of new petrol and diesel cars by 2030, providing charging infrastructure at convenient locations is crucial to encourage drivers to go electric sooner, particularly the significant number that don’t have access to off-street parking.”