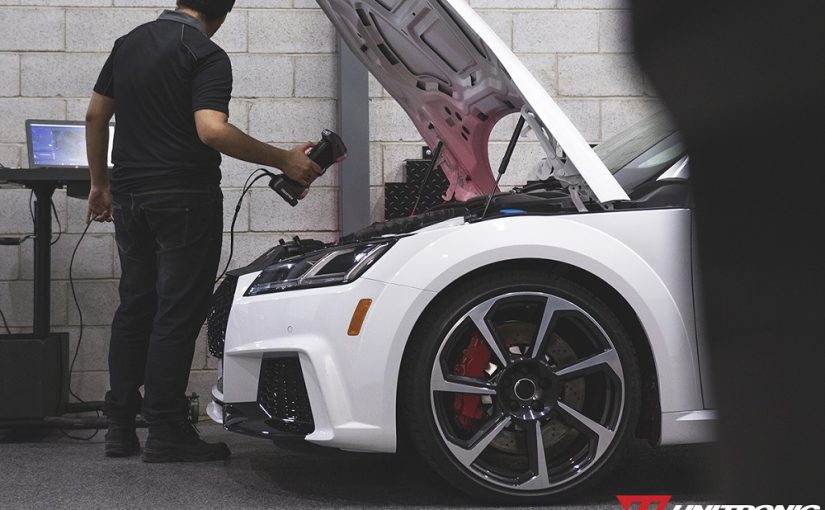 Audi RS3 or an Audi TT RS you are already a lucky dog. These fine performance machines wear the coveted RS badge. That means that they have been tested and tuned on the Nürburgring for maximum performance under extreme conditions. However, even extreme, hard-core sports cars have margin for improvement. The folks at Unitronic know this as well as anyone. They develop tunes and products for most Audi models including the extra special RS cars. The latest product to come out of Unitronic is their Dogbone Mount, also referred to as the Pendulum Mount. The Dogbone Mount will be compatible with the 2017 to 2020 RS3 and the 2017 to 2021 TT RS.

available now. It will set you back $499.99. Your racecar build will have to wait just a little bit longer. The red track oriented Dogbone Mount is expected to arrive in April 2022. Pricing for that one has yet to be announced. This is one of those upgrades that no one will ever see, but you will be able to feel it from behind the wheel. If you want to go fast you don’t want your car wheels to be jumping off the ground. This is a reasonable investment that will give your car that little extra edge on road or track.

Here’s an in-depth look at how one can resolve a DSG transmission issue on an Audi S4 and walk away with a 500HP super sedan bargain.

Sam Crac is a YouTuber with a knack for buying cars sight-unseen at auctions. His latest conquest is a clean title Audi S4, which he procured earlier this month at an auction for 50% off because of a transmission issue. A three-part series on Crac’s YouTube channel offers an in-depth look at how one can resolve the said DSG transmission issue and walk away with a true bargain that can be modified into a 500HP track monster.

Crac was quick to share his expectations for the S4 even before the repairs were underway. “We could get lucky and fix this for a hundred bucks, but if not, we’re looking at a near $5000 transmission replacement making this Audi a true auction mystery,” said Crac.

Safe to say, we were hooked. After running a diagnostics test and replacing the original battery that was running low on charge, Crac managed to get rid of a majority of the codes. The YouTuber also deduced that the transmission issue was probably stemming from an electrical fault, as the gearbox did not make any noise while driving, which would indicate a mechanical issue. The Audi Mechatronic repair kit costs around $500, but installing it is a tedious process that involves removing the cross brace and transmission pan. True to Crac’s prediction, the simple Mechatronic circuit replacement fixed the transmission problem, but the YouTuber had more elaborate plans for his mystery Audi S4.

“We are definitely gonna tune this car. We’ve got to do some modifications,” said Crac. He further added, “To mod this car, you could do it in probably half the amount of time it took us to do that Mechatronics repair. A couple of pulleys, while we’re in there, we’ll do a tune-up, spark plugs, and things like that, and in a day, we’re going to gain darn close to 200 horsepower.”

In the third installment of this series, we see the mild-mannered auction-bought Audi S4 transform into a supercharged AWD beast. The transformation was complete after Crac installed a pair of new aftermarket pulleys and an Armytrix exhaust system. All that was left to be done was a quick engine and transmission tune, and Crac’s auction-bought Audi S4 was ready to make some noise. 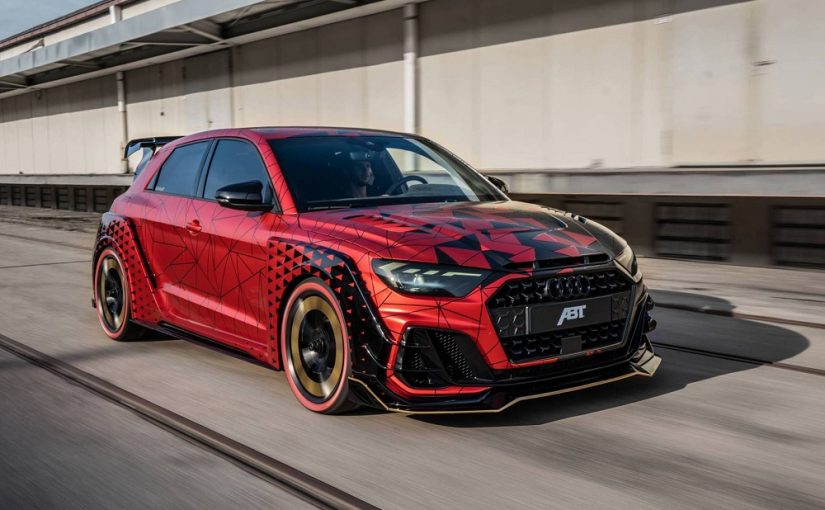 When he’s off the track, former Formula E driver Daniel Abt rolls in this tuned Audi A1.

In the world of motorsport, German driver Daniel Abt is less famous for taking podiums than he is for having an esports star compete for him during the 2020 Race at Home Challenge. After confirming that he brought in a ringer to do his job, Audi promptly kicked him to the curb, and while he’s said he’s not retiring from racing, Abt — somewhat unsurprisingly — doesn’t have a seat this year. But his hot new A1 proves he doesn’t have any hard feelings toward the company.

This pocket rocket has been given the full treatment from his family’s tuning company, and given all the upgrades, it must be a total kick in the pants to drive. Because in addition to having a crazy wrap and enough body bits to make a SEMA car blush, it’s gotten a substantial increase in motivation department. The stock motor has been plucked from under the hood, and while the replacement is still a 2.0-liter turbo, the new mill is pumping out a whopping 400 horsepower.

For those keeping score at home, that’s more than twice what stock examples produce, and unlike most of the Audi product we get on this side of the Pond, all that poke is piped to the front wheels. While there are obviously better platforms to start with if you’re looking to build a super-quick street car, I dig that Abt chose to trick out an A1, even if I’m not sure I’d be stoked about rocking something with what’s almost certainly brutal torque steer.

As you can tell from the pics, the greasy bits aren’t the only part of this machine that’s been have been tricked out. Up front, the front fascia has been reworked to add a fat splitter, and there’s an aggressive new hood. To give the car a meaner stance, there are also boxy fender flares at all four corners, which frame forged 19-inch ABT ER-F wheels. Out back, there’s a massive wing and rear diffusor, and enhanced side skirts tie the whole package together.

Inside, there appears to be enough Alcantara to outfit four or five cars, which — especially given the bombastic nature of the asymmetrical exterior wrap — makes it look a little one note. In the video below, Abt makes it clear that this is a one-off deal, but for A1 owners looking to add more grunt, the company has go-fast bits available that’ll bump output to 240 horsepower.

Watch the video below to see — and hear — this wild A1 in action, and let me know what you think about Abt’s prospects. Is he out of racing for good? Or do you think he’ll be back to Formula E next season? 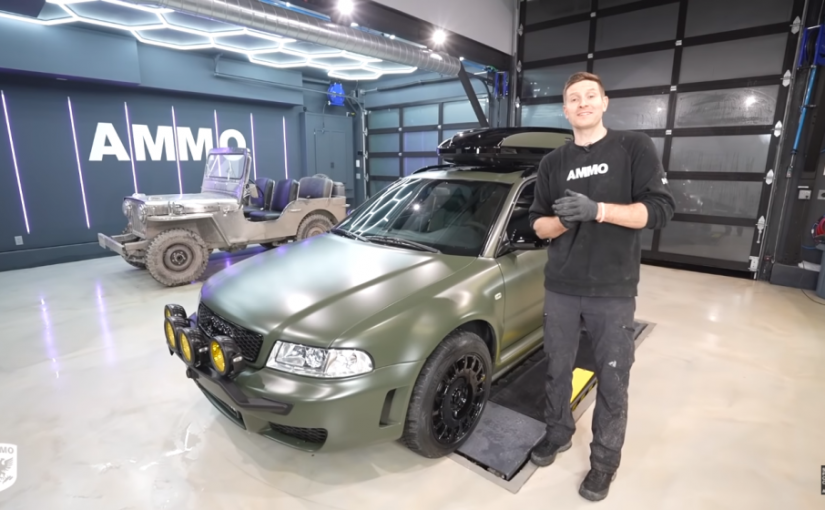 Larry Kosilla from Ammo NYC uses AI Design’s Audi RS4 Avant to demonstrate how you can revive a filthy car back to its showroom condition.

Earlier last month, Matt Farah’ got behind the wheel of AI Design’s rally-spec Audi RS4 Avant for YouTube channel Hagerty’s new show Modified. By the time the YouTuber was through driving the performance wagon around a muddy pit, the car was covered in a thick layer of ooze. This is where Ammo NYC stepped in. The company produces car care products, and its creator, Larry Kosilla used AI Design RS4 Avant to demonstrate how you can revive a filthy car back to its showroom condition.

Well, if you’ve watched Farah’s video, then you know that he didn’t exactly make things easy for the guys at Ammo NYC. Kosilla shared his thoughts on the car’s condition, “Mud was literally caked everywhere, on every surface, inside every pocket or crevice, and it was like this clay type mixture, which made it incredibly sticky and harder than usual to remove”. It is important to be extra cautious while removing the coating of clay and mud. Ammo NYC started the detailing process by power washing the car. This way, you can ensure that your car’s paint or wrap like the Matte Green vinyl of the RS4 remains undamaged. The power wash revealed all the high-tech equipment and fancy gadgetry that AI Design installed on the wagon.

AI Design publicist, Roger Garbow offered a quick rundown of the tech that the tuner installed on RS4 “We also have in the front, a FLIR thermal imaging camera because this client loves that kind of stuff. These four right here (auxiliary lights), put out 34000 lumens, it’s crazy! This thing lights up the night like it’s daytime.” It is not enough to just scrub the bodywork if you want a thorough and deep clean. Kosilla demonstrated the same by unfastening the wheels and raising the car onto a lift. This revealed the mud and rocks that settled inside the inner barrels of the rims. There was mud even blocking the holes within the rotors. It is worth remembering that one should leave the wheel lugs in, to not get rid of the specific grease, as that may cause the part to wear.

AI Design’s RS4 Avant has an exposed underbody which required some extra persuasion. After the suspension, wheel wells, calipers, and the underbody were power washed, Kosilla hit the surfaces with Brute Wheel Soap that would dissolve most of the dirt. Kosilla also approached the tight spots with a scrubber to agitate the more resilient junk. After removing a whopping 26 lbs of junk from the car, Kosilla lathered the Matte Green Audi RS4 Avant using Ammo Foam and Boost additive. Kosilla used a microfiber cloth and a soft bristle brush to tackle the leftover dirt once the soap had seeped into every inch of the car and loosened the grit. This step also requires a power wash, especially on the door seams, which gets rid of any dirt stuck in tricky corners. The next step involves drying the car, and for this, Kosilla used Ammo Hydrate, which acts as an additional layer of protection as it dries a surface. Ammo Hydrate also acts as a lubricant, which ensures that any residual dirt does not scratch the car’s paint or the vinyl wrap. The use of compressed air is also recommended at this stage, to get rid of any unwanted particles that are difficult to reach.

Lathering the dirt on the cabin surfaces and agitating it with an interior brush will make it easier to clean. A quick vacuum for the carpet and water extraction for the floor mats will leave your interior gleaming like brand new. Kosilla used Ammo Reboot to reinvigorate the RS4 Avant. After spraying the product, you can use a microfiber cloth to massage Ammo Reboot into the paint surface and remove the residue using a clean towel after letting it do its magic for about 10 seconds. This product is especially recommended for vehicles that have Ammo Reflex Pro Enamel coating.

Finally, Kosilla hits all the windows with Ammo Obey E-Cleaner, and lo behold, the car was as good as new. As satisfying as it is to watch, this detailing job wasn’t an easy task. “This was by far the muddiest car I’ve ever worked on,” said Kosilla describing his experience.