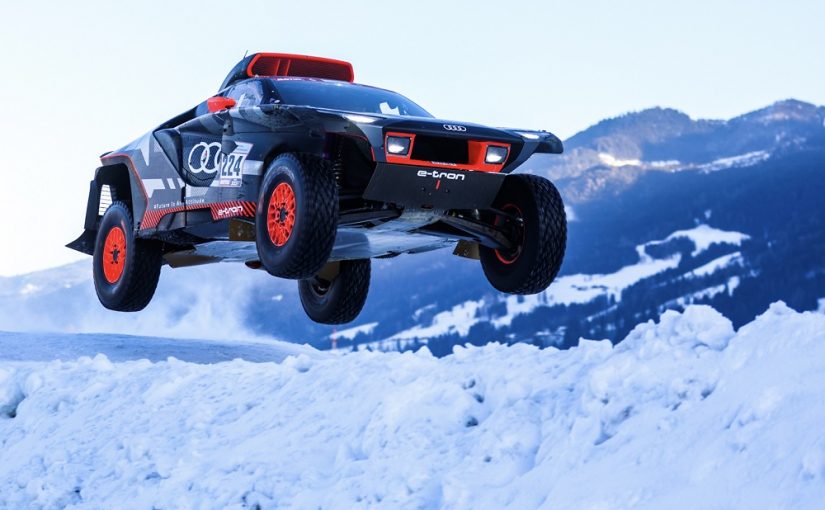 The first exhibit featured in the Audi Tradition app will be will be “Der fünfte Ring,” and it will focus on NSU.

Earlier this year, the Audi RS Q e-tron made history at the Dakar Rally, when it became the first hybrid vehicle to take a stage victory. Unfortunately, the overall crown wasn’t in the cards, as both mechanical issues and navigational miscalculations conspired to keep Audi Sport off the podium. But Dakar was just the beginning of the story for the RS Q e-tron, and after getting behind the wheel at Austria’s GP Ice Race, ace pilot Ken Block had great things to say about the next-gen competitor. Here’s the relevant bit from the Audi press release:

The laps in the Audi RS Q e-tron were a phenomenal experience – even though the car probably feels more comfortable in the desert than in the snow, said Ken Block. Thanks to Mattias Ekström, who patiently explained all the special features of his car to me. A few minutes behind the wheel was enough to understand the fascination of this car.

Swedish driver Ekström, who brought his RS Q e-tron to a ninth place finish at Dakar, also had kind words for Block, stating “It only took three turns for Ken to get fully up to speed.” Now, at this point, it’s a given that Audi Sport’s hybrid racer will return to Dakar next year, and given his experience with the desert race, it’s not outside the realm of possibility that Block could claim a driver’s slot.

In Austria, however, the focus was more on fun, as Audi also brought out some historic hardware to hoon on the icy circuit. For Block, the highlight was clearly driving the 1983 quattro A2, which he’s previously credited with inspiring his interest in motorsport. But the open cockpit the DKW Hartmann Formula V was even more of a throwback, and when parked next to the newer Audis, it highlighted just how much racing has changed over the last 60 years.

Though there are some great pictures from the GP Ice Race, there’s precious little video. That said, Block and Audi are currently working on the next installment in Block’s Gymkhana series. Dubbed Elektrikhana, the forthcoming video will feature an electric vehicle inspired by the legendary Audi Sport quattro S1, and knowing Block, it will push the boundaries of what’s possible in an earth-based vehicle.