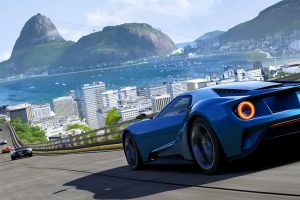 Gran Turismo versus Forza? Playstation versus Xbox? Which camp are you in?

For years I’ve been in the legion of Gran Turismo fans but with every release of Forza I find my devotion starting to waver. The Xbox contender seems to grow from strength to strength while the Playstation stalwart seems to be treading water. Maybe I’m being unfair to the Gran Turismo team, but this launch trailer for Forza 6 has renewed my longing to buy an Xbox.

This is the biggest Forza yet, with over 450 cars to choose from and 26 destinations to race in, 10 of which are new to the series. Each destination has several layout options too, so there’s plenty of asphalt to keep you occupied, whether that be on new tracks such as Lime Park, Watkins Glen and the Circuit of the Americas or old favourites such as Spa Francorchamps and the legendary Nürburgring.

There’s a demo to whet your appetite too, which throws you behind the wheel of the 2016 Ford GT and pitches you against 23 opponents on the streets of Rio de Janeiro, a new fictional buy discount levitra track added to this release.

On top of the extra content comes a new weather modelling system that does more than reduce grip and make pretty patterns on your monitor. Forza goes as far as modelling puddles on the track, which can lead to aquaplaning if you’re not careful. There’s damage modelling too, which can leave your pristine supercar looking very second-hand after a hard race. Gran Turismo, please take note!

Pagani In The Rain

The demo then takes you through the early stages of the career mode and introduces you to the new pre-race modding system, which allows bonuses to be added to the end-of-race results or to give your car a little extra performance.

Forza 6 will hit the stores on September 18th so there’s still time to get your pre-order in and start driving on the day of release.