Following on from the under nose slot of two years ago and the letterbox slot of last year, this years Red bull continues to explore aero solutions around the nose box.Â  However with revised nose rules this year, itâ€™s an idea from Sauber that found its way onto Neweyâ€™s drawing board.Â  Now letterbox opening faces backwards and is joined to the slot below the nose with a duct, to overcome aerodynamics issues presented by the nose box.

Last year I explained that Red Bulls letterbox opening was largely to overcome the issues of the stepped nose.Â  Sauber also had a ducted solution aimed at the same issues which also resolves some of the airflow problems under the nose.Â  This yearâ€™s Ferrari 2013 nose slot has also been explained here. 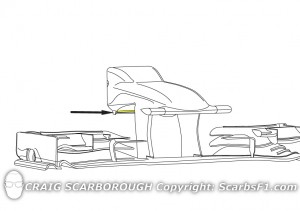 A short modesty fairing, removes the 2012 slot but keeps the lower slot (arrowed)

In an attempt to keep the nose box cross section as small as possible and according to Newey to save weight, Red Bull havenâ€™t adopted a full modesty fairing, instead the stepped nose is smoothed with a small fairing.Â  This modesty fairing removes the letterbox opening use last year.Â  But the high pressure generated under the nose and increasing boundary layer remain an issue, as does keeping the airflow attached over the step.Â  So the car keeps last years under-nose slot, but rather than exiting into the monocoque to cool the electronics, the slot now feeds a duct that curves up in an â€œSâ€ shape to exit rearwards in the scalloped top of the monocoque. 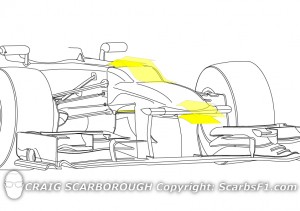 The lower slot feeds the “S” duct, as witht he Ferrari F138 lower slot, this relieves the pressure and boundary layer building up below the nose. Â The duct then exits rearwards over the chassis. Â As with Saubers solution last year, this helps keep the flow attached behind the stepped nose. 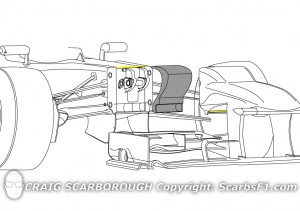 The “S” duct sends flow from below to over the nose

Although Iâ€™ve drawn the ductwork separately, the â€œSâ€ duct is actually bonded into the nose box and isnâ€™t removable.Â  No doubt we will get some pictures of the reverse face of the nose box once the season begins, to see the ductworks full details.

Packaging the duct requires some repackaging around the front of the bulkhead.Â  The bulkhead features a rounded indentation at the bottom to help turn the air fed through the lower slot through 90-degrees and then the anti roll bar and brake fluid reservoirs are packaged into the top half of the bulkhead and flanked by carbon fibre mouldings that follow the shape of the duct.

Red Bull have always kept a slight V-shape to the cross section to the front of the monocoque, this keeps the blockage in between the wheels to a minimum and aids the lower wishbone geometry.Â  The resulting valley in the top of the chassis allows the flow out of the nose duct to exit. 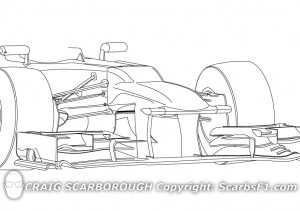 In the latter part of testing at Jerez the Ferrari F138 appeared with a slot under the nose cone.Â  In adopting a nose slot, Ferrari have followed other teamsâ€™ recent developments in this area.Â  Contrary to much rumouring the slot is a relatively simple aerodynamic solution to improve the air flow under the raised section of chassis. 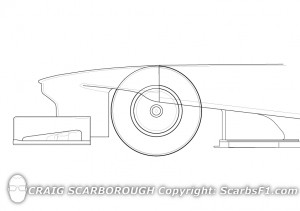 The nose and the raised section of chassis it attaches to creates several issues for the aerodynamicists. Â Firstly the nose box forms a blockage in between the front wheels and reduces the flow that can pass in the gap between the wheels.Â  Secondly the very high nosebulkhead designs that are almost universal this year create a high pressure region under the nosechassis that is effectively creating lift, thus working against the downforce. 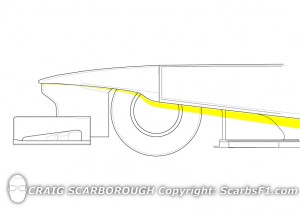 Boundary layer (yellow) builds up as flow passes under the nose

Lastly the nose and chassis present some of the longest flattest sections of bodywork on the car (floor excepted) and thus a boundary layer builds up along these surfaces and can create issues with separating flow. A boundary layer is the airflow that is effectively stuck to the car; whereas the main flow is passing over the car.Â  As the bodywork surface continues more airflow sticks and the boundary gets thicker. Â As the boundary later is not moving (relative to the car) it is providing no aerodynamic benefit and simply causes flow separation and aero issues downstream.Â  It appears the nose slot is a solution to resolve these issues, which one of these creates the greater problem for the cars performance, is debatable, but a small aero gain can be had by easing this issues.

As long as two seasons ago, Red Bull also exploited a slot under their nose, its design was more discrete and even when the letter box slot at the top of their nose last year was introduced, the under nose slot largely went unnoticed.Â  Thus the RB7 had a slot created at the intersection between the chassis and nose box.Â  Rather than a slot being formed in the nose box shape, the slot was formed by a layer of bodywork being added below the chassis.Â  The small duct formed by this panel lead back to the front axle line, where it entered a small recess moulded inside the monocoque.Â  This recess was about the size of large paperback book and sported exit vents into the footwell area of the monocoque.Â  I suspect this area housed the FIA timing transponder, but probably not much else, due to its small size.Â  The cooling effect was probably of some benefit, although other teams do not see the need for specifically cooling the transponder. 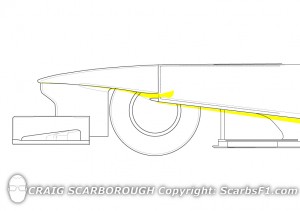 The under nose slot reduces boundary and pressure, by venting into the cockpit

In fact the benefit of the slot was the effect on the cars external airflow.Â  As air passes under the nose, pressure and a boundary layer would start to build up.Â  The airflow would then be split by the slotduct airflow adjacent to the noses surface, air would enter the duct, skimming off the boundary layer in the, process.Â  As the duct is also divergent it would reduce the air pressure under the nose at its entry, by the high pressure region venting into the slot.Â  The off body airflow, that is the moving stream of air a few millimetres away from the bodywork and thus clear of the boundary layer, would pass over the slot and the reattach to the under surface of the raised chassis.Â  This flow is moving faster and is at a lower pressure than the flow closely attached to the nose cone.Â  Thus this flow will have more energy to work on aero devices downstream.Â  By splitting the boundary layer and off-body flows at the slot, the preceding nose cone can be shallower, thus reducing the blockage it creates between the front wheels.Â  This simple slot effectively negates the three negative aero effects presented by the nose box. 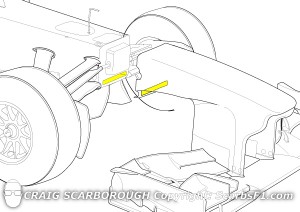 Ferrari solution is very similar to Red Bulls slot, but the slot is formed in the nose box itself.Â  Legally the slot might be far forward enough to be considered the driver cooling slot, if so it will be restricted in inlet size.Â  Or if the slot is behind the FIA defined A-A bulkhead line, then it will not be considered part of the nose box and has total freedom on inlet size.

The slot is mated to a corresponding opening in the monocoque, this appears to feed into the footwell area, I doubt that its purpose is to be ducted for aero effect elsewhere on the car (i.e. DRS) or cool anything that isnâ€™t already inside the cockpit (i.e. KERS).Â  The air most likely cools the driver from the ambient heat and the heat created by the power steering rack and electronics boxes.

This is a simple and effective solution, as the front bulkhead on the monocoque needs the slot made into it; itâ€™s not something that can be easily copied in 2013.