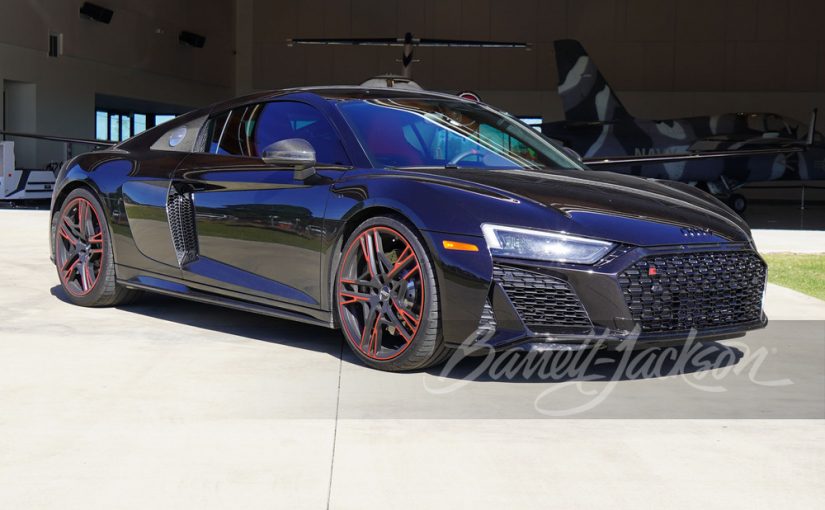 One of 30 made for the U.S. market, 2021 R8 Panther Edition wears namesake Panther Black paint over Crimson Red and black interior.

The R8 stands out among the Audi family for its status as a supercar. While other Audis have flexed their muscles before, they also could comfortably hold a family of four. The R8, on the other hand, delivers a more intimate experience for two. Or, on the track, just the driver.

Speaking of the track, Audi built a rare version of its rear-drive R8 for the 2021 model year: the R8 Panther Edition. Now, one example is destined for the big tent of Barrett-Jackson this January in Scottsdale, Arizona. This R8 Panther Edition is one of 30 made exclusively for the U.S. market, draped in an equally exclusive color named Panther Black. The Audi dropped a year ago around Christmas time, and were the first 30 of the 2021 rear-drive R8 models available. And why rear-drive? Because quattro is still verbotten on the biggest battlefields of competition to this day, like the FIA GT3 class. Aside from the exclusive Panther Black, the R8 Panther Edition includes carbon fiber-trimmed mirrors, engine compartment, and side intakes. Even the badging is blacked-out to fit the theme. Each corner features a 20-inch matte black wheels trimmed in red, wrapped in Michelin Pilot Sport 4S rubber.

Though no photos of the interior were taken, we do know it has Crimson Red leather seats. Surrounding them, a black leather interior with red stitching, complemented by a diamond-stitched Alcantra headliner. And of course, behind all of that is the 5.2-liter V10 with its 532 horses at the ready. Though V10s sound good out of the box already, the R8 Panther Edition kicks it up a notch with a sport exhaust system to really let it all roar. The 2021 R8 Panther Edition is the second big cat Audi introduced into the wild. Back in 2019, 100 RS 5 Panther Edition models descended upon the unsuspecting, all in Panther Black. With nearly 2,100 miles on this V10 so far, this R8 has yet to begin its hunt for prey on the track. By the time its victims notice, it’ll already be too late.