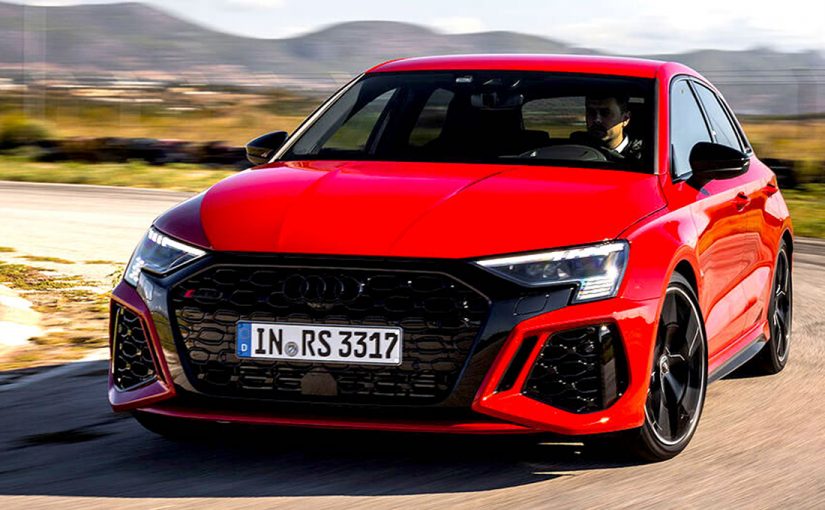 We have covered it already in our Audi TT RS road test, but Audi and promised that it will end internal combustion engine development in its electric quest with a mooted all-electric range by 2033. Somehow, however, it seems not everyone at Ingolstadt is singing off the same sheet. And here’s another reason why. Enter the latest full-blooded gasoline-burning rip-snorting RS3 Sportback. Best of all, it is the rowdiest loudest, most powerful version of the company’s turbo straight-five engine yet. It’s so good it that it almost seems that the boys at RS are using their 3 to show the world a giant red finger. Almost!

It’s not hugely more powerful. This latest, could it be ultimate RS3 musters all of 401 horses. Or just one HP more than the last one. But it’s how this all-aluminum port and direct fuel injected and intercooled turbo 2.5-liter twin-cam 20-valve five-pot pulls so hard to its 7000-rpm redline that makes it so different. A new active exhaust really makes it shout. It’s still stereo augmented, that basic soundtrack is so good that worrying about the fake bit doesn’t even matter anymore.

Torque is up too. RS3 Sportback gains a handy 15 pound-feet to 369 lb.-ft through the same 7-speed dual-clutch automatic as the TT RS with its various shift programs. And launch control. We will probably find that Audi’s claimed 3.8 seconds to 60 mph and an 11.8 second ¼-mile claims will be conservative. We managed three and a half to sixty with the old one and they said it’d do four. Let’s see where this one ends up anon. Top speed is limited to 155 mph. Add an RS Dynamic package to up it to 180. Among RS3’s various drive settings, is one called Dynamic. It really is a hoot and forces you to paddle shift. Best of all however, you can adjust the level of torque you’d like the quattro all-wheel drive to send aft via a new RS Performance mode. A pair of independent clutch packs conspire to shift drive to the rear axle, and to either rear wheel. Just select RS Torque Rear mode in the Drive Select menu. To help RS3 rotate. Get my drift?

To the ends of its new rear slant, RS3 also now runs on a staggered 265/30R-19s up front and a 245/35R-19 wheel and tire set-up at the rear. And a torque-vectoring rear axle that invites far more aggressive driving too.

RS3’s strut front suspension gains exclusive pivot bearings and an extra degree of negative camber over a normal A3. Makes it far more responsive. But likely accelerates tire wear too. What we do for ultimate performance? There’s also an extra half-degree negative camber on the rear wheels. Where the multilink set-up also gains a hollow anti-roll bar. RS3 rides an inch lower than the A3. A little under half an inch lower than the S3. Beats a Veyron Around the Nürburgring

All of which has conspired to allow a stock RS3 to lap the Nürburgring Nordscheife in 7 minutes 40.8 seconds. To quantify that, it’s quicker than the original Bugatti Veyron.

But wait, there’s more! RS3 of course carries all those latest Audi A3 and S3 updates across in far more premium cabin. Which means there’s 10.1-inch haptic touchscreen integrated to the dash with all the very latest gadgets inside, a 12.3-inch RS configurable digital instrumentation and a RS design package that adds red or green accents across the cabin. Which of course has all the right performance bits like bucket sets, cool pedals, and the rest.

So yes, the all-new Audi RS3 Sportback is a bit of a screamer. That much is for sure. It will be in the US by early next year. Expect to part with a little less than $60K for one. And enjoy it while it lasts. It won’t be long before Audi’s brand architects take that RS finger and… well.

We’ll leave that one to you to best figure it out. But this rowdy, racy and really quite rude little car may very well be the epitome of the RS3. Sad as that may seem…