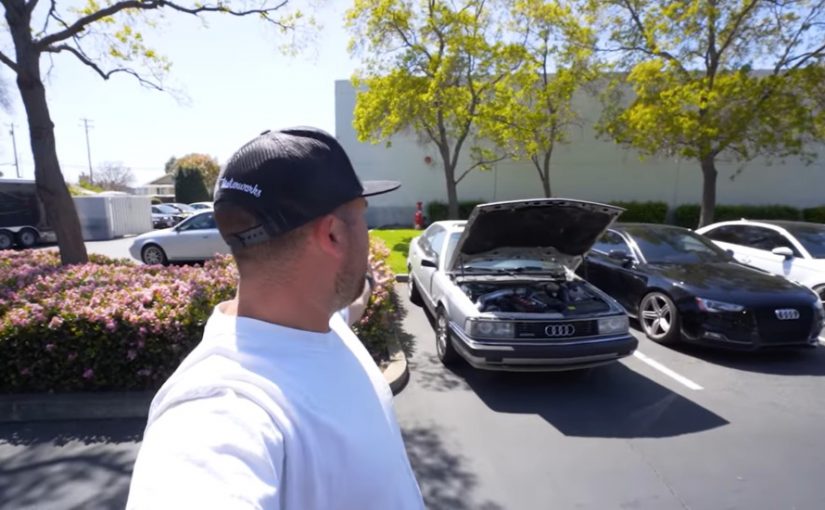 The third-gen Audi 100/200/5000 arrived with smoother, more aerodynamic styling to the three-box design, accented by pin-mounted windows. The result? A drag co-efficient of 0.30 on the base model alone. Thus, the Audi could slip past the gas stations for a while longer. And, once the 2.2-liter, 20-valve turbo-five arrived at the end of the Eighties, it could also slip by the competition.

This Audi 200 in Fremont, California, though, doesn’t just slip by. It straight-up kills them with four tune maps, the third of which is more than enough for the occupants, including Adam Swords of Adam Swords Rough Cuts. “We’re just about go dyno my Mk 7 Golf,” said Swords, “which is going to Stage 2. And while we’re waiting, [Nick Mercadante is] like, ‘Let me see if I can find something for us to play with. So, he pulls out this.”

As 034Motorsport’s marketing director says, the Audi 200 features a 2.2-liter turbo-five which the owner may have bored out to an unknown displacement. Mercandante says it also sends at least under 640 wheel horsepower on “the higher file maps” to (thankfully) all four corners. But that’s not even its final form. “So, that’s Map 1,” said Mercandante. “That’s lowest of boost, right around 28 pounds, I think. [The owner] has it wired through this switch right here. When I turn around, I’ll flip her up two maps above to Map 3.”

He says the Audi has four total maps, the third of which contains the aforementioned 640 ponies in the corral. However, the fourth map is where every bit of sanity is decimated in a blaze of turbocharged glory. Though un-dyno’d at the moment, he believes the 35 pounds of boost can take the sedan into the 700-horsepower range. And all on the stock manual transmission and shifter, too. As Swords says, the whole affair “was terrifying.” “I like fast cars,” said Swords. “I have no issue with going fast in cars. That is insane. That might be one of the fastest-feeling cars I’ve ever been in […] I’m gonna go for a lie-down and change my underwear.”