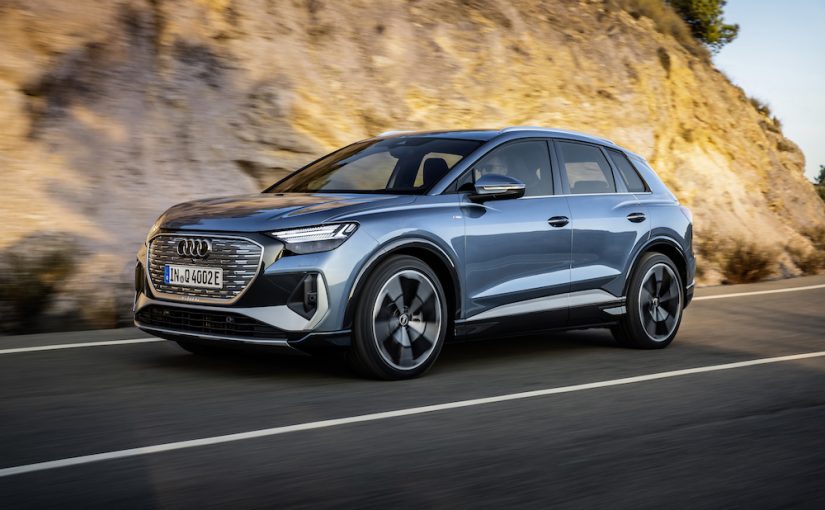 Audi’s Q4 e-Tron stands as a preamble to their future fully-EV fleet. But how does it stand on its own? Let’s check out some reviews!

One of the newest kids on the block for Audi, the Q4 e-Tron represents the company’s flagship of family-minded crossover. At first glance, most gearheads groan at the prospect. Let’s face it, plenty of crossovers these days just blend into the background. It’s safe for manufacturers to create unassuming, bland, “typical” crossovers. Audi, however, well they’re trying something a bit different. Promoting their upcoming all-encompassing EV lineup, they’re hitting the ground running with something rarely glimpsed in the wild. According to critics, Audi made an EV crossover that’s actually exciting.

The new Q4 e-Tron represents Audi’s fourth entry into their fully-EV e-Tron series, and the first luxury crossover on their MEB-platform. Supplemented by the larger Q5 e-Tron, Audi’s take on the body style represents a harbinger for what’s to come. The Q4 appears in either traditional SUV or a Sportback body style, and features either one or two motors for AWD models. Its electric powerplant features regen-braking, fast-charging capability, and an estimated range of 241 miles.

since its founding in 1909. But Audi fires right back, dropping a banger of a car in the most innocuous crossover-shaped package. Crammed with the latest tech on a state-of-the-art package, the Q4 e-Tron received rave reviews for its drivability, performance, and features. Let’s have a look at what some of these people have to say!

A Recipe for Success The Q4 e-Tron, in many critics’ minds, represents one of the best takes on the luxury crossover to date. That said, at the end of the day, the Q4 remains one of the first of Audi’s fully-EV lineup. So while there’s undoubtedly kinks to iron out, it’s what you get for your money that counts here. In terms of its accessibility, CNET calls the Q4 “an easy way for the electro-curious to take the plunge on EV living.” Certainly appropriate given it’s one of Audi’s opening acts to the fully-EV main event. So that fills out the EV and crossover bits, but what about the luxury?

True to its mid-$50,000 price, the Q4 features a plethora of standard luxury features, along with a few surprises. That is, aside from the usual givens – leather interior, premium infotainment, power everything. In addition, Audi incorporated a number of advanced technologies such as adaptive cruise control linked to an augmented-reality HUD. And for Audi’s first venture, it’s apparently a pretty good one. Ars Technica calls it “very easy to use, and it makes you feel like you’re playing some kind of futuristic video game as you drive along.” Certainly an interesting and novel way to liven up the commute in a crossover. Audi also included adjustable regen-braking using paddle shifters. Which Bloomberg remarked, “allows me to coast like a normal person rather than abruptly slowing to regain energy.” All in all, Q4 reviews list it as an affordable premium luxury crossover or sportback. Perfect, then, for daily commutes and gearheads with families.

CarExpert calls the handling “stubbornly one-dimensional,” citing stiff suspension and lack of feedback. Others also remarked on the stiff handling, with Ars Technica remarking the Q4 feels “ungainly and awkward… [The Q4] tends to jostle occupants and packages around more than you’d expect.”

On the flipside, CNET calls the ride “a comfy experience, with a solid highway ride and controlled body motions.” Bloomberg equates it to the ride quality of a Q3, which in their mind, “is a good thing. It means Audi was able to match the prompt acceleration, responsive braking, and intuitive handling as its conventional SUV in this lithium-ion marvel.” Ride stiffness tends to rear its head under specific circumstances – potholes, sharp cornering, and so on. So if you live in a nice, hilly area with good roads, the Q4 looks to be perfectly serviceable. It’s certainly not the most exciting ride. But it’s also a crossover, so you can’t necessarily fault it for that. That said, the fact remains that Audi hit the nail on the head with the Q4 e-Tron. An important factor to consider since it’s all uphill from here. Even as a preamble, this humble crossover’s certain to leave a lasting impact with new buyers.

I’ve been an automotive aficionado since I had baby teeth. My path was set when I first leaned on my grandfather’s classic Porsche as I learned how to walk. One of my first memories was my mother sitting me behind the wheel of her Pontiac and talking me through the instrumentation and controls. Even though I was a mere three or four years old, I was instantly sold, and filled notebooks with technical drawings, sketches, and collections of manuals of all sorts of cars. I’ve actively tracked developments in automotive and motorsport technology for well over 20 years, and pride myself on being intimately familiar with the functions and history of a wide range of vehicles.

My primary goal as a writer and enthusiast is to equally learn and share what I’ve learned in a constructive and interesting way. I maintain connections with people from around the world and can read technical manuals in Italian, Japanese, and Spanish, granting me access to a wide array of resources. My primary focuses are deep-dives into historical topics, motorsport discussion, and learning about the complex mechanical elements of such vehicles. As such, my research is never perfect; as anyone into cars will attest, the more you learn about cars, the more you realize how little you actually know. Therefore, I always welcome fresh knowledge and corrections to help me better my work in the future. 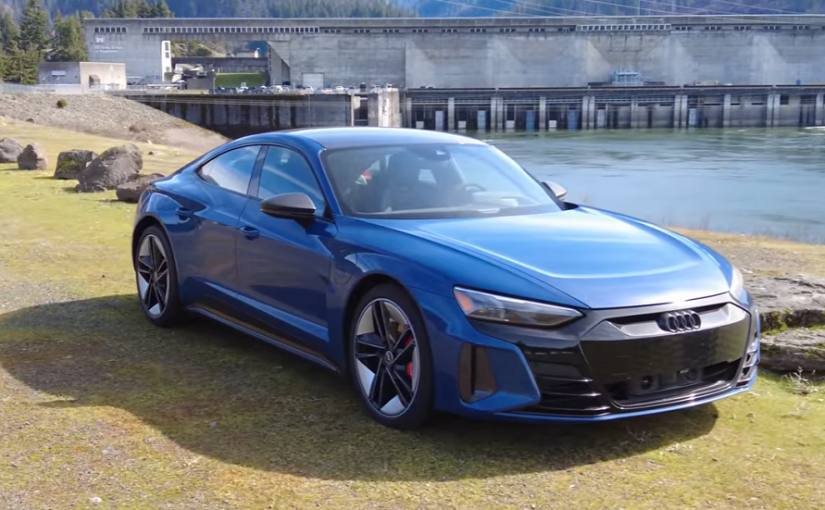 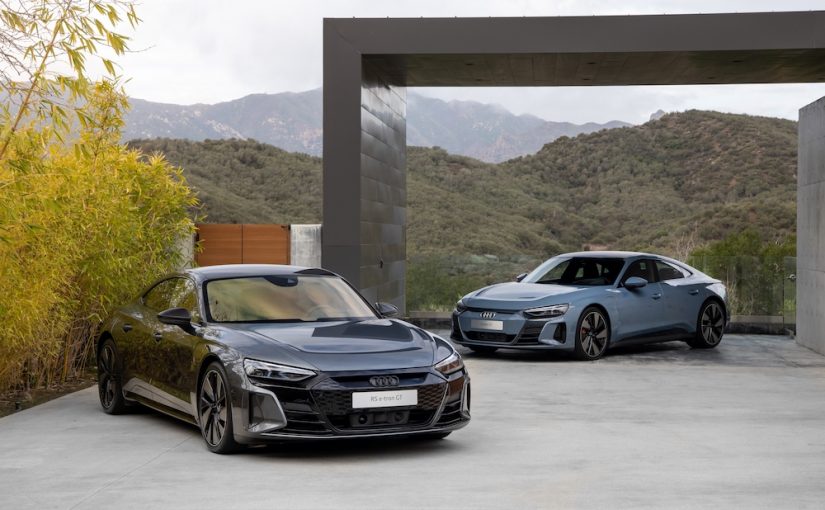 Audi e-tron GT plays a vital role in the German automaker’s ambitious plan to electrify the US auto market.

In a recent press release from Audi, we’ve learned that the e-tron GT and RS e-tron GT will be offered with several options to keep you on the road more and at the station less. Anyone who’s looked into purchasing an electric vehicle knows that one thing to consider is the availability of charging stations and the time you spend there. Audi, along with its partners, looks to solve those issues.

From multiple options for in-home charging to an expanding network across the US, Audi has its sites set on helping America electrify and the e-tron GT has its sights on doing so with speed and style. One of the many perks of owning a 2022 e-tron GT or RS e-tron GT will be three years of complimentary DC fast charging. The deal is in partnership with EV-charging pioneer Electrify America whose network is rapidly expanding. Electrify America stations work in conjunction with the e-tron to charge the vehicle as rapidly as possible, taking the e-tron from 5-80% in about 22 minutes, using a 270 kW charger. Electrify America expects to have 800 charging stations with around 3,500 chargers by year-end 2021. In addition to the rapidly growing charger network, Audi is partnering with Qmerit to create viable charging options and its customer’s homes. Qmerit will offer two in-home charging solutions installed by certified electrical technicians. The options are as follows:

While Evs might seem like the softer option, e-tron GT is no slouch on the track. With the RS e-tron GT being slightly quicker than the V10-powered Audi R8, owners can expect to have as much fun as they desire. Using the legendary 12.9-mile Nürburgring Nordschleife track in Germany as a development site, Audi ensured the thermal management system capable enough for any level of excitement. The e-tron GT is expected to hit showroom floors later this summer and will soon be followed by the Q4 e-tron and Q4 Sportback e-tron. Audi has set the bar high, hoping to have the largest fleet of electrified vehicles offered by a luxury manufacturer in the US by year-end 2021. Audi hopes to electrify 30% of its fleet by 2025. Afterward, the goal is the become fully carbon neutral by 2050.