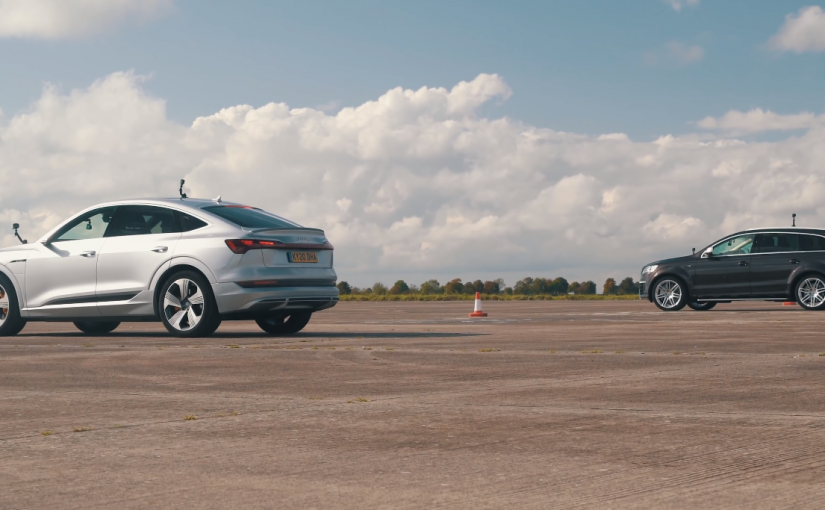 Mat Watson of CarWow drag races an Audi e-tron Sportback against a 2009 Q7 TDI equipped with a 6-liter V12 motor.

In one of CarWow‘s most recent videos, the YouTube channel uses the age-old rivalry between old and new as a parameter to investigate how an Audi e-tron Sportback fares against a first-generation Q7 (facelift model). The latter is propelled by a 6-liter V12 TDI diesel engine which produced 493 HP of maximum power and 738 lb-ft of peak torque in its factory tune.

CarWow’s presenter Mat Watson was quite impressed by the diesel Q7. Watson recently also proclaimed that the Q4e-tron is the best electric SUV on sale. Even though the e-tron Sportback is more powerful than its smaller sibling, it is still no match for the Q7 TDI, when it comes to the overall power output. The all-electric SUV produces 405 HP of power and around 490 lb-ft of torque. So it would seem that a drag race between the two models would favor the internal combustion model.

However, Watson was quick to highlight that “the idea behind this race is to show just how fast these latest electric cars are compared to internal combustion engines.” At 5,390 lbs the Sportback is much lighter than the V12 Q7, which weighs around 5,809 lbs. Thanks to its electric-only powertrain, the Sportback should also accelerate much faster than the Q7 TDI. Unsurprisingly, Watson also shared our opinion. “It could be a very close race. This (e-tron Sportback) will get off the line very very well, not sure how that (V12 Q7 TDI) will get off the line,” said Watson. After an underwhelming soundcheck, both cars lined up for the first bout where the Q7 TDI proved to be victorious, on the account of a driver’s error.  Mat’s reaction time cost him the first race. “I held on the brake, and it just didn’t go very well,” explained Watson. Luckily, the drivers agreed to race a couple of more times, and on both occasions, the e-tron Sportback won the race with a quarter-mile time of 13.5 seconds.

The Q7 TDI made up for its losses by beating the e-tron Sportback in back-to-back rolling drag races, but the battery-powered model performed better in brake tests thanks to regenerative braking. Overall, CarWow’s latest webisode offers a thrilling ride and keeps the viewers on their toes throughout the video.