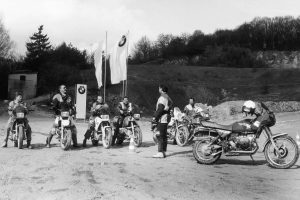 1993 was quite a while ago. Bill Clinton became the new U.S President. Czechoslovakia was replaced by the Czech Republic and Slovakia. And the European single market was created as the European Union was founded. In motorcycling, 1993 saw the launch of the BMW R1100GS, along with the Ducati Monster, Triumph Tiger 900 and Yamaha YZF750. And BMW Mottorrad Enduro Park Hechlingen was created. Now in 2018, the BMW Enduro Park celebrates 25 years of hosting off-road enthusiasts.

The Enduro Park Hechlingen took an abandoned quarry and turned it into a 26 hectare area for enduro motorcyclists of all abilities. And it covers a range of challenges including steep slopes, gravel tracks, single trails, forest tracks, ruts, climbs and descents, as you ride under the watchful eye of the professional instructors.

It’s also notable as the inspiration for numerous BMW enduro parcks and official partners around the world. Not only was it created to provide a place for motorcyclists to enjoy improving their riding, but a lot of work has been put into preserving numerous species of animals and plants. The conservation work even won an award from the German Federal Ministry of the Environment.

As the BMW Enduro Park celebrates 25 years, there are more than 40,000 people who have visited to improve their riding. That’s across around 250 training courses each year, run by more than 50 employees instructing and in the workshops. And maintaining the bikes includes around 420 tyre changes on an annual basis. As well as around 400 clutch and brake levers broken off each season.

The photos reveal how much has changed since the park opened. Aside from the early 1990s riding kit, there was the transition from the BMW R100GS and R80GS to the modern dual sport BMWs we see today. The BMW R1100GS was a slight stepping stone, but it shares a clear lineage right down to the current R1200GS. 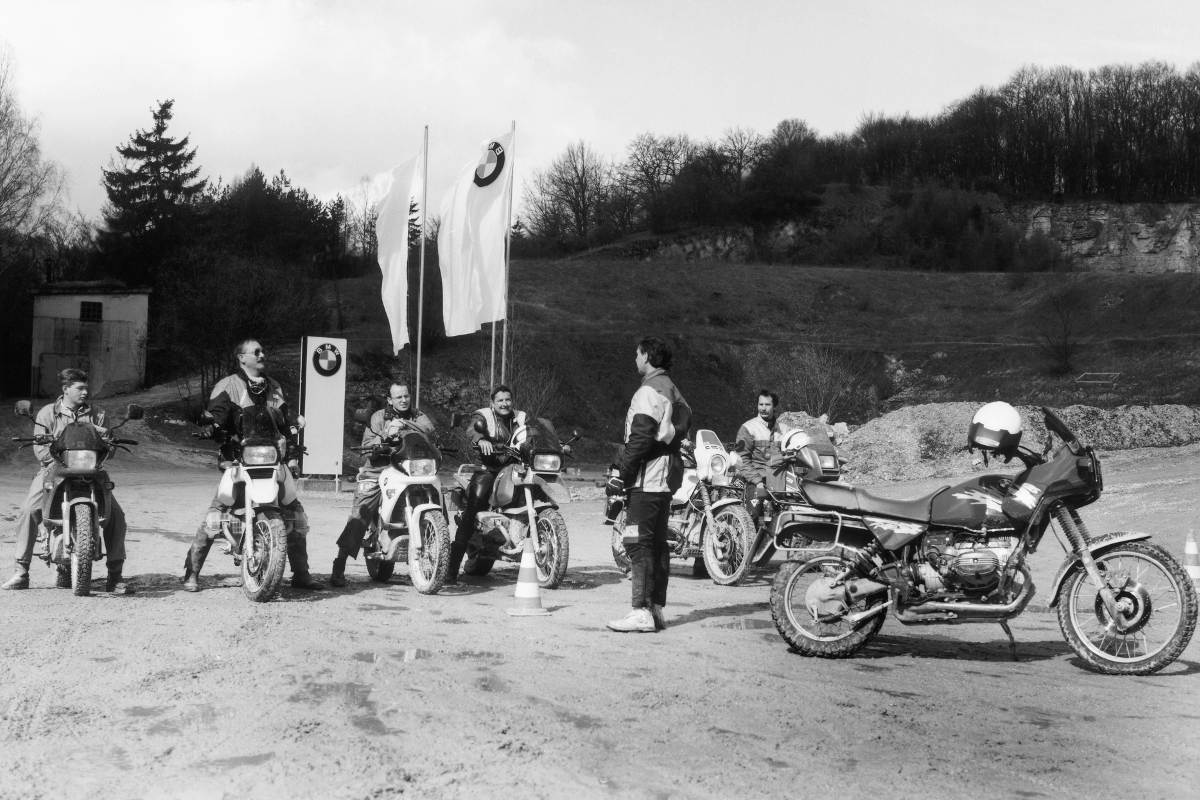 BMW opened the park with the idea of offering motorcycling as an ‘integral, all-round experience’. And obviously this and other parks have to cover their costs. But you can imagine how much feedback and usable data is generated by having 3,650 riders using and abusing your bikes in a controlled environment  in 2017 alone. 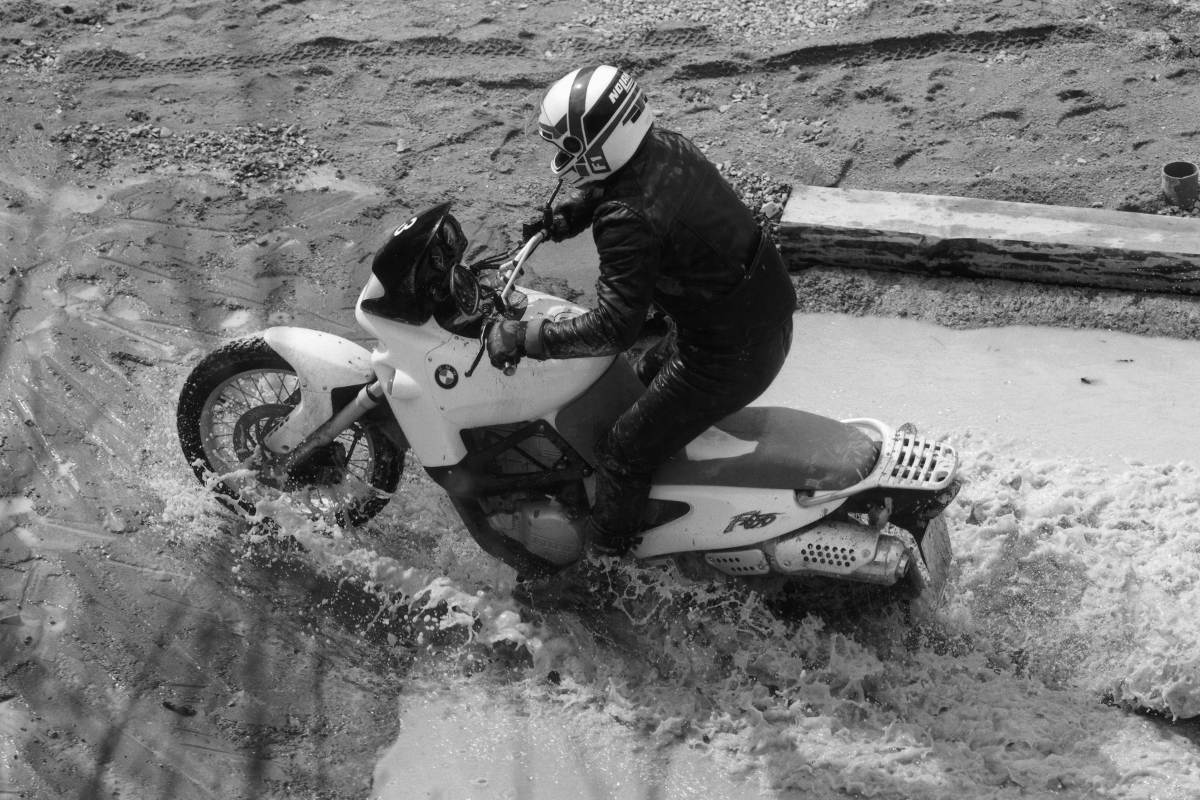 The Enduro Park Hechlingen was originally owned and operated by BMW Motorrad, but in 2008 it was passed over to Enduro Park Hechlingen GmbH under the direction of Manfred Spitz, one of the first instructors. And both companies are currently looking at various expansion and extension plans to create an even bigger and better experience. 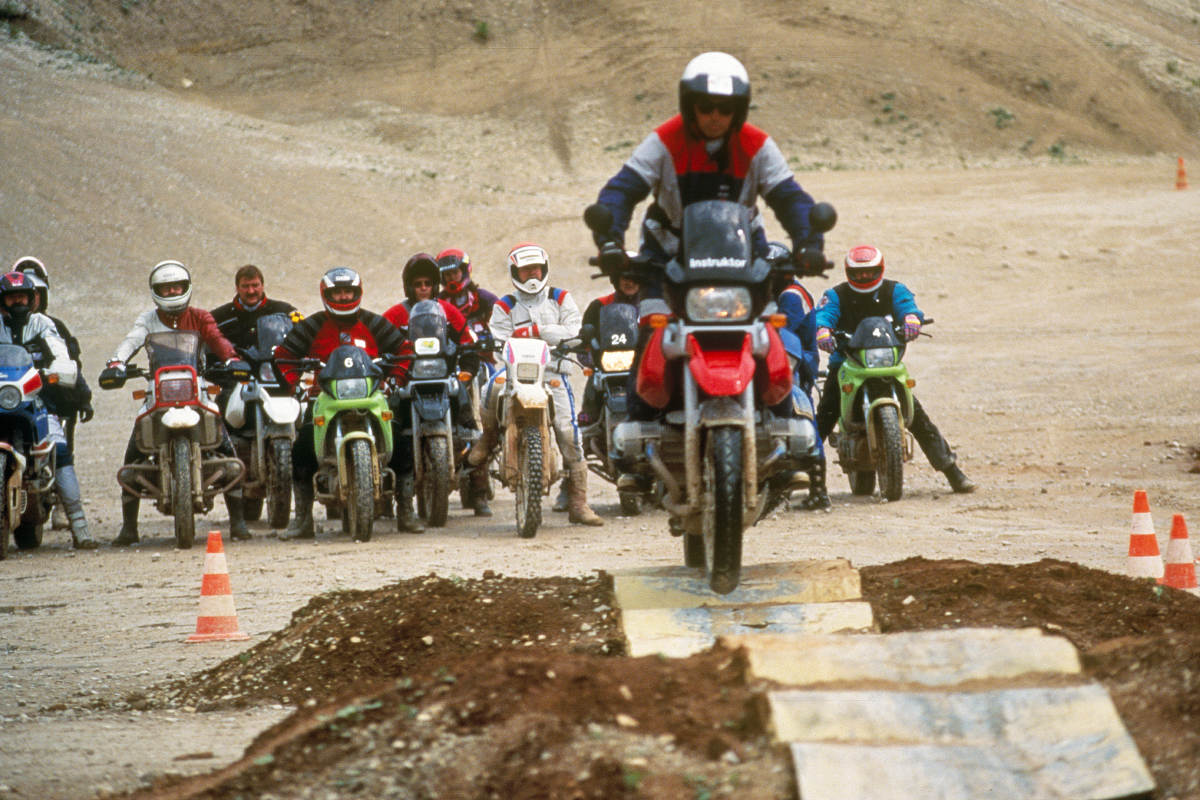 Having experienced the BMW training available in the UK, we’re sure that the Enduro Park Hechlingen must be a pretty incredible experience for any enduro enthusiast. As the BMW Enduro Park celebrates 25 years, here’s to hopefully writing a story explaining how it has grown over the next 25.

END_OF_DOCUMENT_TOKEN_TO_BE_REPLACED

There’s nothing worse than pulling up on your motorcycle, putting the sidestand down, and then slowly toppling to the floor because you stopped next to a pothole. Or getting off and starting to walk away before hearing the sound of a bike landing on the ground because you found a nice soft patch of mud to park on. To help prevent embarrassment for those riding Germany’s most popular brand, there’s the new Wunderlich BMW Sidestand Light.

Yep, it’s a light that shines down with your sidestand to help you avoid damaging your bike or yourself. Which means less hassle trying to find the right piece of ground to use in the dark. Even if it’s a fairly well-lit area, the shadows from you and your bike can make it difficult to spot exactly what you’re just about to rest thousands of pounds of motorcycle on.

You can turn the light on and off via a switch mounted on the handlebar. So it’s probably also handy if you have a habit of dropping loose change and other items on the ground.

It’s quick and easy to mount, connecting to the wiring loom with a simple plug without any soldering required. And it also works in conjunction with the CAN bus on your BMW. So that means it automatically turns off when you switch off your ignition. So you won’t accidentally return to a flat battery.

So the new Wunderlich BMW Sidestand Light is quick to fit, might save you from an embarrassing disaster, and it’s hard to see any downsides. It’ll fit all liquid-cooled Boxer models, and the current six-cylinder bikes. And the German-made kit comes with a five year warrant, and all for £89. Which seems more than reasonable.

END_OF_DOCUMENT_TOKEN_TO_BE_REPLACED

Some of the best ideas tend to be simple ones. And for versatility and avoiding the need to unbolt guards, these new adjustable Machineart ADVance Guard Handguards could well make the cut. With the frame fitted, you can choose to slip an insert in for additional warmth and protection, and also slide a shield up and down for more coverage. So you don’t have to take them on or off, and then discover the bolts went missing in the garage in the Summer. Or they’ve seized up on your bike.

The Machineart ADVance Guard Handguards consist of a wide aluminium Safety Frame which allows the air to pass through it. But still means your hands, brake and clutch levers are protected from knocks, scrapes and falls. Which is useful. And it fits to the handlebars and bar ends with lightweight forced aluminium mounts shaped to avoid messing with any cables. And they look alright for everyday riding, too.

But what happens if the weather gets cooler?

Then you just snap in the Machineart ADVance Guard Handguards Insert, obviously. So that will provide some extra wind and weather protection for your hands. And also more defense against stones and other debris hitting your paws. So if you’re riding off-road behind someone, it’ll mean less chance of getting a pebble propelled by a rear tyre into your digits. If you’ve had it happen, you know how much it hurts.

But what if it gets even colder? Or the bike in front is sending up a rooster tail of gravel and debris?

For the coldest conditions, there’s the Machineart ADVance Guard Handguards Adjustable Shield. Like the insert, it’s made from a resilient plastic polymer, and it’s quick to attach or remove. And once fitted, you can raise it up to 142mm to stop anything hitting your hands, and keep more of the chill away.

At the moment, the new adjustable Machineart ADVance Guard Handguards are available for:

More bikes are being added to the list in 2018, and the Machineart ADVance Guard Handguards cost £189, which included a model-specific fitting kit and instructions.

END_OF_DOCUMENT_TOKEN_TO_BE_REPLACED

Normally the advice in life is to focus on one thing. And yet it seems ‘motorcycle lifestyle destinations’ are popping up all over the place. For example, The House of the Machines started 4 years ago in Cape Town, South Africa, providing a combination of ‘coffee, cafe, craft beer, cocktails, live music, menswear and custom bikes’. And now BMW is one of the partners for a new LA branch for The House of Machines. Proof that wherever you may go, you’ll meet friendly motorcyclists and a bearded bloke who has paid way too much for a bad 70’s-based cafe racer thing.

Still modern motorcycle seems to involve Strategic Directors and corporate synergies for consumer activation points. Which is presumably why BMW Motorrad is partnering with The House of Machines (THOM). And it even involves a new men’s fashion label named Limits No Longer Appl (LNLA) initiated and inspired by BMW Motorrad. Because of course, it bloody does. Apparently you’ll only be able to buy via the store or online in the U.S and each item will only be available for 12 months.

Don’t get us wrong. There are great venues all over the place, including in London, where you can get food, drinks, check out some bikes and gear, and have a lovely time. And that’s a good thing. As much as we enjoy a good fry-up at a rundown greasy spoon by a dual carriageway, it makes sense to go with the times. If that means I can drink a good craft IPA and eat some tacos while chatting about bikes, then I’m all in favour.

But do we really need to describe what sounds like a decent place to hang out for a bit as ‘a place for people with a love of detail, a striving for perfection and a passion for the motorcycle lifestyle’. Or as THOM’s Strategic Director calls it ‘Where man and machine coexist’. Well, technically man and machine also coexist on the floor of any factory or online retail warehouse, but I’m not stopping there for a coffee.

So to sum up, The House of Machines looks like it could be a good new place for bikers to visit in the Arts District of LA. And it’ll have coffee, drinks, food, clothes, custom bikes and more. So if you’re in the neighbourhood, you should check it out (and let us know what it’s like). And it’s also time to stop trying to cram every single buzzword into any description relating to custom motorcycles based on an older style. Before doing things a bit different ends up becoming a bit naff.