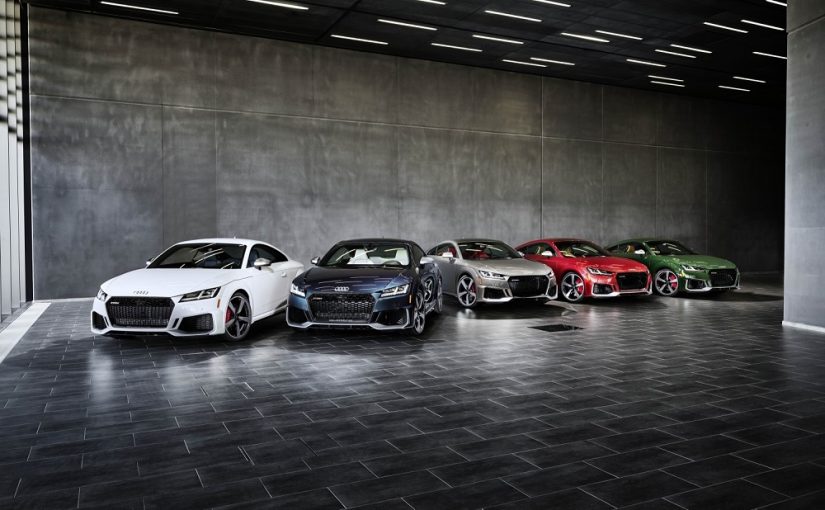 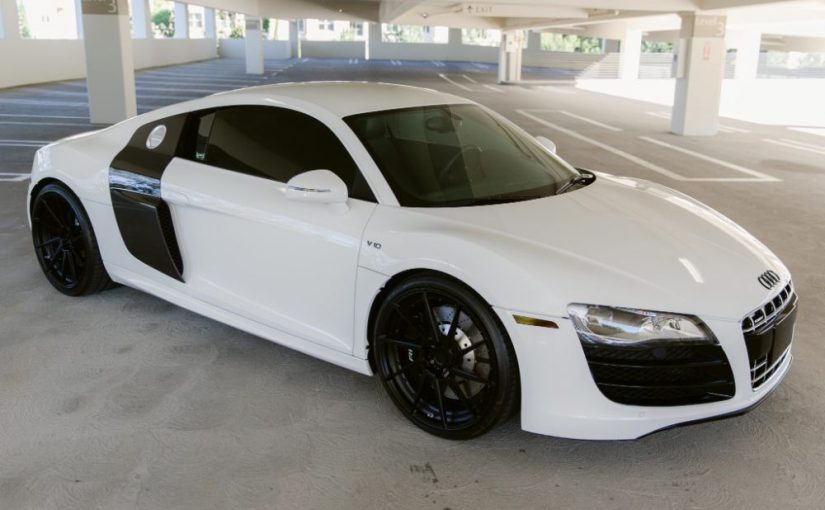 Originally from Washington state, Ibis White R8 V10 Coupe goes all in on the monochrome panda vibes, travelled 14,000 miles in its life.

When rolling in an Audi R8 V10, you may get a few looks as you drive by. After all, it is Ingolstadt’s halo machine. Yet, it’s subtle enough to pass by most people, especially when its Italo-German cousin, the Lamborghini Huracan, show up in all its majestic splendor.

One such R8 V10 Coupe we recently found on Bring a Trailer takes its split personality to the next level. In a way, it might just blow the doors off the next Huracan to strut its stuff on the high street. The Ibis White R8 V10 Coupe landed in Washington state back in 2012. After spending most of its days amid the evergreens with two owners, its third and current owner brought it down to Newport Beach, California, where the Audi enjoys plenty of sun. It also received a new set of 20-inch ADV.1 alloys in black, which, with the carbon fiber blades and black trim pieces, turns the panda vibes up to 11. Behind the occupants, the 5.2-liter V10 knocked out some 14,000 miles over the years, all meeting the road via a six-speed manual transaxle. The Toyo Proxes T1s likely covered a few of those miles, since they’re date-coded to 2015. Perhaps the next owner will update the rubber on either the ADV.1s or the stock 19-inch alloys the R8 V10 still has. Inside, black Nappa leather seating is ready to welcome the driver and lucky passenger into the R8 V10. The seats are heated, too, for those chilly mornings. The gated gear shift waits for the driver to take control. Meanwhile, Audi Navigation plus is still at the ready to lead the way to the next destination. Whenever this R8 V10 Coupe passes through the fine streets of Newport Beach, there may be a few who’d mistake this monochrome gem for a TT. When it pulls into the club, though, everyone’ll know this is no ordinary Audi. Sometimes, it pays to be subtle. This R8 V10 does so in spades. 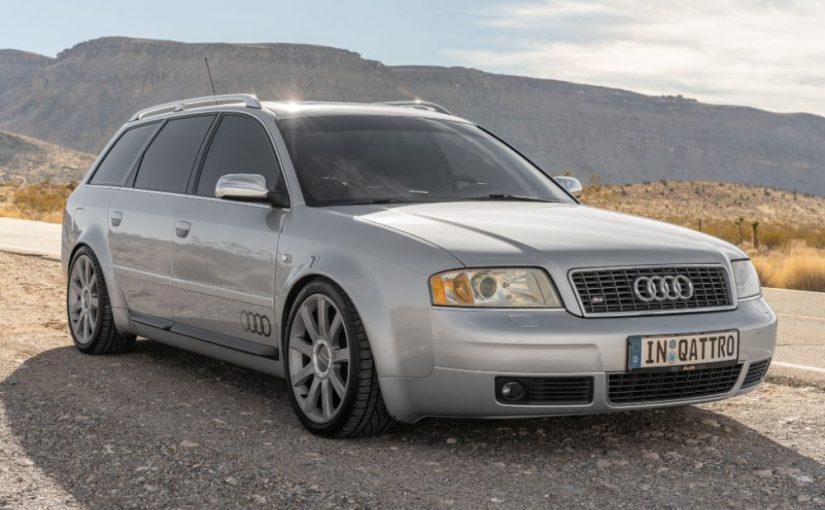 Today, if one seeks a wagon with power from Audi, their best shot is the RS 6 Avant. The 4.0-liter twin-turbo V8 slams down 592 horses and 590 lb-ft of torque through the corners while conquering all the corners. On the other end, the A6 allroad 335 horses and 369 lb-ft of torque from the 3.0-liter turbo V6 allows the wagon to dominate any terrain.

Alas, there’s no middle ground between the two available in the United States at present. Back in the 2000s, though, one could find it with the S6 Avant. One such example is currently on Bring a Trailer with no reserve. Now 20 years old, this 2002 S6 Avant in Light Silver Metallic has called the Silver State of Nevada its home since 2013, having relocated to the desert from Massachusetts. We can definitely say the dry air has done wonders to keep this classic Audi from the salt and corrosion the East Coast would’ve bestowed upon it. Instead, it must deal with the occasional rock chips from the sandy earth on either side of the road. Those chips will have a bit of a time trying to catch the S6 Avant, though. After all, this Teutonic wagon’s got a 4.2-liter V8 with the five-speed Tiptronic automatic to move all four 18-inch RS 6 wheels around. In its day, the big V8 made 340 horses and 310 lb-ft of torque, and it likely still has all of those ponies and their torque in the corral. A fresh fuel pump and fuel filter certainly help with the overall power output. Meanwhile, the S6 Avant’s interior still looks great two decades later and 98,000 miles later. There is some pixel failure on the infotainment system, though a newer unit could resolve such issues. Otherwise, there’s plenty to love here, from the gray leather seating to the dark wood veneers. This two-owner S6 Avant’s experienced a lot over the past two decades, and it’s still got plenty of life left. May whomever becomes the third owner enjoy the next 20 years with this silver machine. 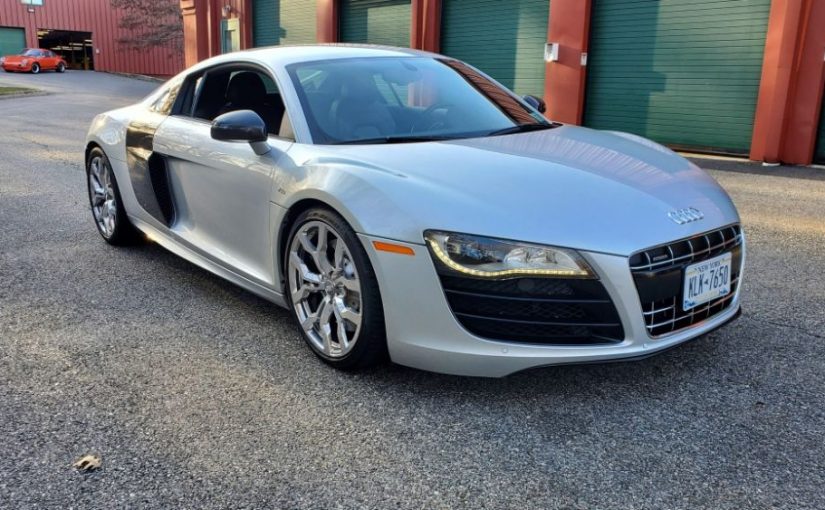 The Audi R8 V10 proved to be the better formula for Ingolstadt’s halo car. So much so that when one goes to shop for either the R8 coupe or convertible today, the only engine available is the 5.2-liter V10 FSI; the V8 and manual transmission were both left behind with the debut of the Type 4S R8 in 2015.

Recently, we found a wonderful example of the Type 42 R8 V10 on Bring a Trailer, currently living in a New York (state) of mind. But it may not for long, depending on who snatches this beauty up. This 2011 R8 V10 in Ice Silver originally called Washington state its home before moving to Upstate New York somewhere along the way. Through the rainy evergreen forests or the snow-covered trees, this silver bullet blends in well with the colder climes (having quattro helps conquer those chilly roads, too). Delivering the power to all corners, of course, is the famed 5.2-liter FSI V10 (which also powered the Lamborghini Gallardo, among other Lambos). Packing 525 horses and 391 lb-ft of torque, the big V10 moved this R8 V10 to 60 mph in just under four seconds. Managing the power is not the six-speed manual, but a six-speed R-Tronic dual-clutch, with the silver 19-inch forged wheels wrapped in Pirelli P Zeroes planting the power firmly upon the road. Only 7,000 miles have been logged by the V10 since new; thus, it practically still is new. Inside the R8 V10, heated adjustable black leather seats provide plenty of warmth against winter’s chill. A Bang & Olufsen sound system carries any musical accompaniment to the occupants. Meanwhile, Audi’s MMI infotainment system delivers all the latest along the way to the next coffee and cars meetup.

Though over a decade old today, this R8 V10 looks as timeless as ever. The sound of the V10 no doubt draws all the attention upon this Teutonic silver bullet as it freezes the road behind it. Whomever takes it home will have one of the best machines to ever leave Ingolstadt. Is there anything more timeless than the Audi R8? Over two generations spanning from the turn of the millennium to the New ’20s, the R8 and R8 V10 represent to this day the pinnacle of everything Ingolstadt has built.

Thus, this 2010 R8 V10 we happened upon on Bring a Trailer the other day should easily find a new home with plenty of roads to play upon, laying down all the luxury and performance it offers along the way. This silver R8 V10 landed in Virginia before moving to Maryland, Florida, and its current home of Tennessee. Along the way – likely after leaving Virginia – it picked up an integrated radar detection system. Once in Tennessee with its current owner, a new sound was given to the Audi via a Fabspeed exhaust system. The forged 19-inch wheels will need some new rubber to replace the 2012 date code tires. Tires from 2019 and 2020 are on the Audi, too; those should be okay. The R8 V10’s 5.2-liter V10 and six-speed manual logged over 52,000 miles in the 12 years it’s been on the road. Each mile, of course, felt all 525 horses and their combined 391 lb-ft of torque rumble over them, including more than a few spirited gallops down the highway. Whether they got to go 220 miles per hour – like the speedometer suggests – is a matter we’ll likely never know about. Whether flying down the road or cruising on the street, though, the R8 V10’s black leather seats provide all the luxury and warmth anyone could ever want. The driver will definitely love rowing through the gated shifter for the six-speed. And all will love hearing their favorite songs coming out the Bang & Olufsen stereo system, too. A 2022 R8 V10 performance with quattro starts at nearly $200,000. This one is nearly half that as of this post. One could say this is due to all the supply chain issues pumping up used vehicle prices through the roof. We would say it’s because an Audi like this is truly special.