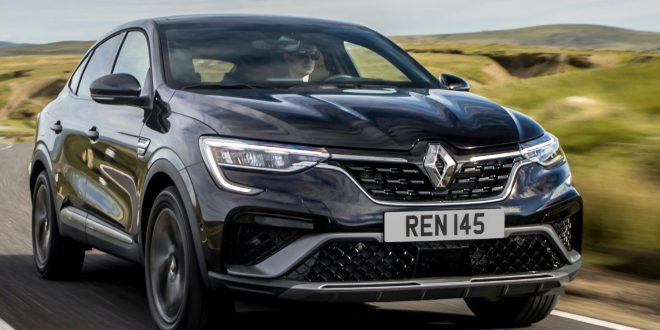 The Renault Arkana E-Tech Hybrid is an intriguing car. Its sleek ‘coupe SUV’ styling gives it serious kerb appeal, there’s plenty of room for all the family and it’s a full hybrid, so there’s no need to plug it in.

Add Renault’s solid five-year warranty, plus all the latest safety kit it comes with, and this Nissan Qashqai-sized crossover ticks a lot of boxes on paper.

Slotting between the Captur and Kadjar in the Renault range, the Arkana is available with two engine options – both fitted with automatic gearboxes.

The TCe 140 model consists of a 1.3-litre mild hybrid petrol engine, offering 138bhp and a combined fuel consumption figure of 48.7mpg. It’s the quickest of the two Arkanas, reaching 62mph from rest in less than 9.8 seconds.

The car we tested, the E-Tech Hybrid, combines a 1.6-litre petrol engine with two electric motors, offering a total of 143bhp. Fitted with a small 1.2kWh battery, the system prioritises all-electric running unless full power is required and Renault claims it can return up to 58.9mpg with a 0-62mph time of 10.8 seconds, while CO2 emissions are a low 109g/km.

First impressions are good. The Arkana stands out from the crowd and looks particularly good in Zanzibar Blue. There’s a real feeling of space inside and the attractive dashboard layout is similar to the Captur, on which the Arkana is based.

Soft-touch surfaces are welcome and overall build quality is impressive inside, while up front it’s more solid and functional than flash. There’s a digital instrument display behind the steering wheel and a portrait-shaped 9.3-inch infotainment touchscreen in the centre console (7.0-inch in the entry-level model).

The driving position is relatively high (the car itself is taller than you might think) and there’s ample leg and headroom for adults to travel comfortably in the rear. There’s a useful 480 litres to boot space (slightly down on the mild hybrid model which has no rear battery), expanding to 1,263 litres with the rear seats down.

Visibility is generally good. Our only gripe was that our test car was not fitted with a rear wiper, which is especially annoying on motorways in the wet.

You’re likely to start off in EV mode and the petrol engine will only kick in if you boot it. Unfortunately, we soon discovered that the Arkana’s six-speed F1-derived clutchless auto transmission, which is supposed to be more efficient and smoother than a conventional automatic, is the car’s weak point.

The gearbox is sluggish and unpredictable at times, meaning that the engine’s revs rise alarmingly at the slightest encouragement. This often-noisy driving experience is a shame because the Arkana package as a whole has a lot right with it.

There are three driving modes (Eco, Sport and MySense). The latter is effectively the ‘normal’ mode, and the setting you’re likely to leave the car in.

There’s also a button on the dashboard for manually switching to electric mode yourself, as well as a ‘B’ mode on the gear selector for extra regenerative braking (the system that adds charge to the battery by harvesting energy otherwise wasted during braking and coasting).

The transition from electric power to engine propulsion, and vice versa, is reasonably smooth – and engine noise aside – it’s no slouch. Naturally it’s hushed in EV mode, but it’s also fairly refined on a motorway cruise.

The Arkana’s set-up is on the firm side, so it handles surprisingly well with controlled body lean, there’s decent grip and it generally feels composed.

We tested the mid-range S Edition, though more spirited drivers might want to consider the top-of-the-range RS Line model which features sporty design cues. That said, we doubt that it is any more dynamic on the road, even in Sport mode.

We couldn’t get close to Renault’s claimed economy figures, but depending on your route and driving style, anywhere between 40-50mpg is realistic.

Verdict: It would be easy to dismiss the new Renault Arkana as a case of style over substance. Yes, it’s an eye-catching coupe SUV and, yes, there are some issues with the gearbox, but overall, it’s a comfortable, practical, quality package backed up by a decent five-year/100,000-mile warranty.