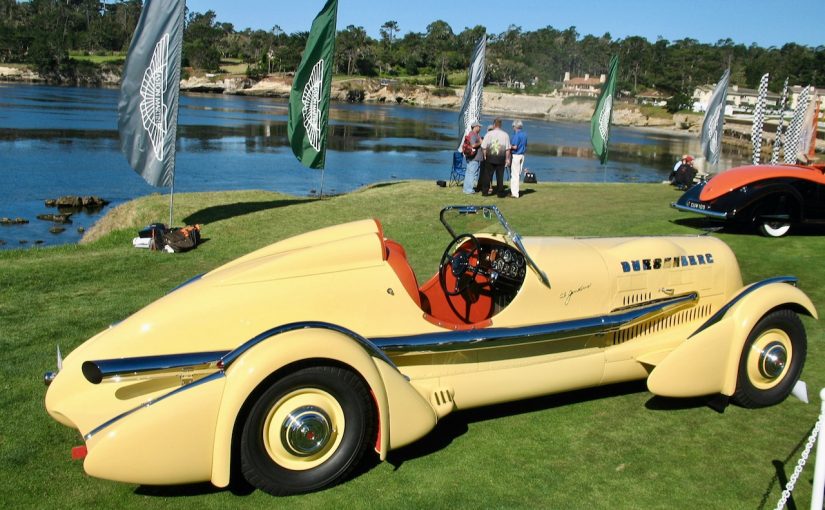 By the late-1920s and early-1930s, the formerly elusive 100-mph mark was old news. Magnificent short-wheelbase ‘32 Duesenburg SJ Speedsters with supercharged 320-horsepower, DOHC engines could top 120 mph. Factory racer and devout Mormon Ab Jenkins set a number of records at the Bonneville Salt Flats, averaging over 150 mph in a streamlined and supercharged Model J Dusey. In 1935 Jenkins returned to the Salt and averaged 135.58 mph for 24 hours, setting a record that stood for many years.

Jenkins’ custom-bodied Bonneville record-setter was modified after the record runs and became the legendary Mormon Meteor. The ’35 Mormon Meteor, originally built for Ab Jenkins who set International Land Speed records on the Bonneville Salt Flats is owned today by Cincinnati, OH collector, Harry Yeaggy and considered priceless. In 2007, the Mormon Meteor participated in the Pebble Beach Tour and took Best of Show honors at the prestigious Concours.

“This is the story about two men, father and son, their racing cars, their lives and the Salt Flats where they ran their most famous trials. Ab Jenkins was the son of Welsh immigrants, first a carpenter by trade and then a prominent building contractor who grew up with the automobile and found a new career in driving cars fast but safely.”

“Ab was sponsored by the Studebaker Automobile Company, Auburn, Cord and Dusenberg, Goodrich and Firestone tires, the Mobil Oil Company, General Petroleum, the DX Oil Company, Pennzoil, Kendall Oil and several accessory and insurance companies over his 33-year career. He spent nine years demonstrating Studebaker’s superiority over the highways from coast to coast and on timed climbs up scores of notable hills, as well as racing competitively on the board tracks on the 1920s.” 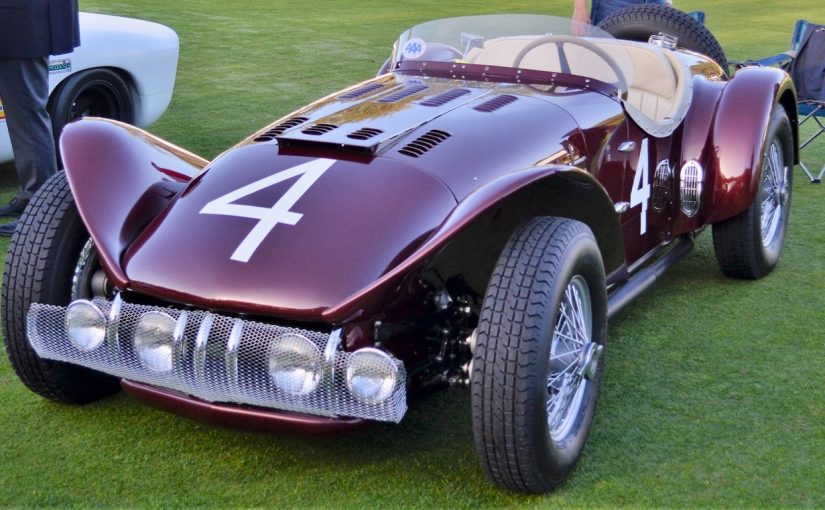 Casual fan or gearhead, there was everything from Brass Era to Gurney Eagles; NASCAR’s greatest hits to Ferrari’s 75th anniversary; and almost anything in between at the 27th iteration of SHOWTIME AT THE AMELIA. Dan Scanlan brings us highlights.

Under The Hagerty Group after it purchased Bill Warner’s Amelia Island Concours in June, an expanded family-themed Cars and Community Cruise-In, a Kid’s Zone, 1980s-1990s RADwood Sports Car Show, and even a Concours d’Lemons were added to the program: https://www.youtube.com/watch?v=PB7To8_PAN0&list=UUbE-kKHYoZVF2G6Rk12sQ3g&index=4&t=4s

The Amelia saw a number of the Sunday concours cars on a road tour that ended with a free display in historic Fernandina Beach. The Porsche Club of America held a judged March 4 Werks Reunion at a nearby golf course, while Goodings, Bonham and RM Sotheby’s held auctions at the concours. But the crown jewel is the 225-vehicle display on two fairways outside the Ritz-Carlton, Amelia Island: https://www.youtube.com/watch?v=cGZKYW6D7bQ&list=UUbE-kKHYoZVF2G6Rk12sQ3g&index=8&t=16s

The National Anthem was sung by rock-and-roller John Oates, above, right, to officially open the show, then fans strolled among rows of rolling sculptures of steel, aluminum, carbon fiber and wood. And by the time it was over, an estimated 22,000 had attended its weekend’s events, Hagerty said. Jacksonville businessman, car collector and racer Bill Warner founded the concours in 1996, and remains chairman emeritus. He showed his own ’32 Ford Roadster in that class and was among the staff and crowds all weekend working as usual. Meanwhile, McKeel Hagerty said he is “absolutely thrilled” at how his first The Amelia went, saying it has been one of his favorites, and that of car people.

“The Amelia is one of the great car events of the world and I have been coming since almost the beginning,” Hagerty said. “… To be able to be the stewards of it now and going forward is a thrill, an honor and we are very pleased with how it’s going. Bill had already stated downsizing it, getting it under 300, so we are at 225. We also wanted to make a bit more room for newer, aspirational cars and we have a lot of great OEMs.”

“We actually restored it seven years ago,” said Yeaggy, whose ‘29 Duesenberg J/SJ Convertible won Best of Show here in 2018. “The car spent its whole life within a 2.5-mile radius until I bought it 15 years ago. It is one of three by Walker LeGrande.”

A Cadillac DPi-V.R racecar with a Wayne Taylor Racing chassis was Best in Show/Concours de Sport, purpose-built to compete in the IMSA WeatherTech SportsCar Championship. It has a naturally-aspirated 600 horsepower Cadillac 5.5-liter V-8, and was the overall winner of the 2018 Petit Le Mans with lead driver Jordan Taylor, Renger van der Zande and Ryan Hunter Ray. It also won the 2019 Rolex 24 At Daytona with lead driver and double F1 World Champion Fernando Alonzo, van der Zande, Taylor and Kamui Kobayashi.

Owner Wayne Jackson saying it was “absolutely fantastic” that his winning race car brought home its first non-racing award. “I couldn’t be more ecstatic,” Jackson said. “This is my first concours, and I didn’t appreciate that I had any chance in the world of winning. It is a very, very exciting surprise.” Best of Show: https://www.youtube.com/watch?v=2x8gvyeRo_A&list=UUbE-kKHYoZVF2G6Rk12sQ3g&index=6

Normally held the first weekend in March on fairways at the Golf Club of Amelia Island next to the Ritz-Carlton, Amelia Island, this year SHOWTIME AT THE AMELIA celebrated the 60th anniversary of the 24 Hours of Daytona, the 70th anniversary of the 12 Hours of Sebring, Indy 500 Roadsters, Gurney Eagle IndyCars, 90th anniversary of the 1932 Ford and Ferrari’s 75th birthday. Jim Glickenhaus (left in hat), below, helped his crew dry the morning dew off his stunning ‘66 Ferrari P3/4, below. And this year’s concours’ honoree was race team owner and former driver Chip Ganassi, eight of the cars that his teams competed with throughout his career on display.

Nearby in the Porsche Aluminum Race Car class was one of the first two factory cars entered into the 24 Hours of Le Mans – a ‘49 Porsche 356/2 Gmund SL of Cameron Healy and Suzy Snow of Portland. Literally one of the first Porsches hand-built in the town of Gmünd in Kärnten, it is one of 63 made.

“It was 20th overall, won its 1100-cc class and beat all the 1500-cc cars,” Healy said. “More than all that, it stood up to the endurance test for this fledgling, struggling company and put them on the world stage. That moment was the beginning of Porsche motorsports since this was its first factory entry. I love the early cars, the shape for one. I also love the history and significance.”

Glowing red and blue in the NASCAR class was John Kyle’s 1972 Cup Series championship-winning Dodge Charger built originally for Richard Petty teammate Buddy Baker. Kyle’s car, an iconic mix of STP red and Petty blue, helped him win the NASCAR championship over Bobby Allison. Richard Petty himself verified it was his when Kyle discovered it years ago.

“In 1972, 50 years ago, that’s when they get the STP sponsorship and Richards transitions from Plymouths to Dodges,” Kyle said. “… Growing up, I would see this on TV, but it was a black and white TV and I thought, that’s a cool-looking car! It got sold to California and got lost for almost 50 years, then I kind of found it.”

Sleeker IndyCars were lined up against the eastern tree line, including 10 epic Dan Gurney AAR Eagles like the No. 88 Bardahl-Pacesetter Homes Special for Jerry Grant to drive in 1966. It is the third Eagle racer now owned by Bobby Rahal, the eagle-beaked open-wheeler’s restoration was done last summer by people who knew and worked with Dan Gurney.

“I don’t know anybody who doesn’t like Dan Gurney,” restorer and veteran Indy Car chief mechanic Don Hoevel said. “… Gurney’s cars in that era were the most beautiful cars you ever saw, and as Bobby likes to say, if it looks great, it probably is great. Fortunate for us, we all knew Dan.”

Moving over to the Sebring class, there’s a familiar-looking ‘53 Kurtis 500S, until you look at the flared front wing fenders and quad headlights in the deep grille intake, separated by stylish chrome bars. The King of Kustomizers himself, George Barris, did those wings, owner Jim Weddle says, as the car won California sports car races, and competed with Bill Murphy driving in the 1955 Sebring race.

“It raced with these Barris custom fenders on it. They look like they would give the car lift, but that was apparently not an issue,” the St. Louis man said. “… In the Sebring race, it came in fifth in class and 19th overall. The co-driver was Sam Hanks, who drove at Indianapolis 13 times and won in 1957.”

The wildest roadster in the Sports and GT Class at SHOWTIME AT THE AMELIA was a shiny just-restored wedge called the ‘66 Cannara 1, owned by Floridian Guy Dirkin, who finished restoration two days earlier. Long before Triumph’s TR7, Fiat’s X1/9 and the Lotus Esprit, Ray Cannara designed this in 1964 while at the Art Center in California and finished it in 1966. There’s a 350-inch Chevy just ahead of the two seats, its chrome air cleaner popping up at the windshield base, with a 1958 Chevrolet front and rear suspension.

“This is a front, mid-engine car. We moved the engine forward slightly,” Dirkin said. “The carburetor used to be where the mirror is, inside the passenger compartment. To make this car wedge-shaped, the engine had to be significantly far back.”

A perfect representative of the 90th anniversary of the 1932 Ford Class was Kim and Mitch McCullough’s Pacific Gun Sight Special: https://carguychronicles.com/32-ford-old-schools-best-school/

It was built in 1946 by WW II vet Roy “Mack” MacKinney, and restored as it was raced by Leo Juri at the 1952 Bonneville Speed Trials. Named after the Pacific Gun Sight Company where Juri worked, the two-inch chopped High Boy roadster had no headlights or windshield, as it ran on the salt flats powered by a Flathead V-8 with Offy heads and Eddie Meyer intake with dual Strombergs.

“We know the continuous ownership history since 1946, so that’s awesome to have that provenance,” Kim said. “… We consider the ‘32s all donor cars for a lot of people having fun. Not everyone has a Flathead. We have a Flathead, plus the original four-carb setup that it ran at Bonneville.”

The Amelia Island Concours has always been known for showing interesting cars of our automotive past, and a big feature was the short-lived three-wheeled cars of the Davis Motorcar Company. The post-World War II idea of used car salesman Gary Davis, who saw the bullet-shaped trike with Hercules 60-horsepower, four-cylinder industrial engine, Studebaker wheels and a claimed four-person bench seat as the perfect answer for car-starved America in the late-1940s, early 1950s!

Jeff Lane of Nashville’s Lane Motor Museum brought the prototype ‘48 Davis Divan, nicknamed “Baby,” and a second one, survivors of only 13 ever made before Davis was convicted of fraud and grand theft in 1950. Five Davis Divans were at SHOWTIME AT THE AMELIA, plus the last gasp of the company – owner Bruce Feuerstein’s ungainly-looking ‘49 Davis 494X-P. Imagine a Jeep with a single front wheel! “He felt, why not throw a Jeep body on it, and maybe the government will pick it up,” Lane said. “Maybe the government will pay me for 200 up front before I build them?”

The concours’ annual charity donations continued over the weekend, a signed photo of Ganassi with his many racing trophies earning $22,000 for Spina Bifida of Jacksonville at a Saturday live auction. Another $17,000 was raised there for The Amelia’s charities, adding to the more than $4.4 million donated in the past 26 years to others like Community Hospice and Palliative Care.

SHOWTIME AT THE AMELIA returns on March 2-5, 2023. For more information, please visit https://www.ameliaconcours.com/