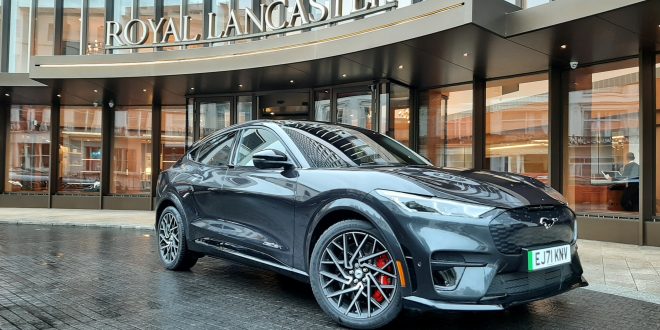 We put the Royal Lancaster’s ‘Plug In, Switch Off & Recharge’ package to the test…

If you’re planning a trip to the capital and you drive an electric vehicle, there’s a new way to make your stay greener and more restful.

The iconic Royal Lancaster London, which overlooks Hyde Park and is a short walk from Marble Arch and Oxford Street, has launched a new package called ‘Plug In, Switch Off & Recharge’.

The overnight stay with breakfast includes free car parking, free EV charging and complimentary access to the hotel’s bicycles to explore the city.

What’s more, the Royal Lancaster London will plant one tree for each night of your stay through the Hotels for Trees initiative to compensate for any CO2 impact of your journey.

We tried out the package for ourselves, driving up from Somerset in Ford’s flagship electric vehicle, the Mustang Mach-E GT.

Not only did we arrive in style, but we avoided paying the £15 per day London Congestion Charge because the zero emissions Mach-E is exempt.

After a greeting from the smart doorman (complete with bowler hat), we were ushered up to the towering 5-star hotel’s secure, private car park. There we connected the car to one of the free chargers available.

The 411 guest rooms and suites at Royal Lancaster London offer classic style and spectacular panoramic views of Hyde Park and the City skyline, making it the perfect place to relax – and recharge your batteries too.

Since opening its doors in 1967, the Royal Lancaster remained mostly unchanged until 2015, when the prestigious family-run property underwent a two-year, head-to-toe, £83 million renovation.

It reopened in 2017 and everything from the modern open-plan lobby area to the redesigned, redecorated rooms and suites have been finished to a high standard.

We stayed in a Park Suite, on the 14th floor, which included a spacious living area with sumptuous velvet sofas, a lavish marble bathroom with twin sinks, shower and bathtub, plus a separate bedroom with king-size bed.

Despite the luxury, it was the 180-degree vista of London’s famous skyline that was the biggest treat – especially a night.

Frankly, it was hard to fault our stay – from the superb service levels via the friendly staff, the attention to detail and overall cleanliness, to the excellent breakfast quality and choice.

After checkout the following morning we returned to our car with zero range anxiety for the journey ahead because the Mustang Mach-E GT was fully charged.

Not that range is a huge issue when the battery pack of the Mach-E GT has been topped up.

Like most EVs, it may fall short of its claimed range (up to 304 miles), but 250 miles upwards is more than enough for most getaways. If you do have to stop off, a rapid 150kW public charger can deliver around 73 miles in just 10 minutes.

We took a more scenic route home, turning off the A303 before Stonehenge and heading over Salisbury Plain – the perfect place to let a thoroughbred like the Mach-E GT stretch its legs.

Blisteringly fast in a straight line (0-62mph in 3.7 seconds), it’s also a refined cruiser and delivers an engaging ride.

Not quite as dynamic to drive as its looks suggest, the Mach-E GT has a couple of party pieces. First, it’s fitted with a noise generator which simulates a combustion engine. Second, more spirited drivers will enjoy unleashing the GT’s more playful side, because the rear-biased all-wheel-drive system allows you to kick out the tail, should you so wish.

The entry-level Mustang Mach-E is priced from £50,830. However, a GT will set you back £74,540. For that, you get a second 240bhp electric motor installed up front. Combined, the two motors deliver a whopping 480bhp of power and an equally beefy 860Nm of torque.

With room for five, plus a decent 402-litre boot capacity and space under the bonnet for cables, the Mach-E GT is one of the performance EVs on the market.

Did you know? Key scenes of the classic British crime caper, The Italian Job, were filmed at the Royal Lancaster in 1968 – not long after the hotel opened. Also, The Beatles held their Yellow Submarine film premiere after-party at the venue in the same year.

Get the lowdown on the Royal Lancaster London hotel’s Plug In, Switch Off & Recharge package. 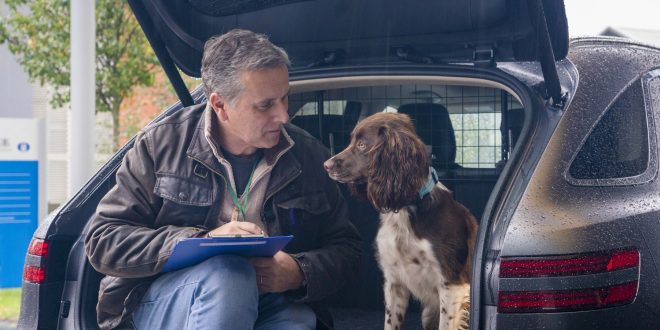 Online vehicle marketplace CarGurus partnered with the University of Lincoln on the new study, which looked at the effects on dogs of travelling in a diesel car versus an electric vehicle (EV).

The two-day investigation used 20 dogs, each taken on two 10-minute car journeys – one in an EV and one in a diesel. During the trip, their behaviour was analysed.

Led by Daniel Mills, Professor of Veterinary Behavioural Medicine at University of Lincoln, the study not only found that dogs were less settled in diesel cars compared with EVs, but those dogs appearing to show some signs of car sickness had notably reduced symptoms in an EV.

The study concluded there was no evidence to suggest EVs have a detrimental effect on dog welfare. This resolves anecdotal concerns that the differences in vibration and/or noise experienced in an EV may cause dogs to be unsettled or have increased car sickness.

While the dogs in the study lay for around a third of the journey’s duration regardless of powertrain, in diesel cars dogs broke their laying position on average 50% more than when in an EV.

Another notable finding from the study was that a small number of dogs appeared to feel markedly less nauseous in an EV compared to a diesel car. This was demonstrated by changes in behaviour and the fact that their heart rates reduced by up to 30% when travelling in an EV.

“Our results clearly show that dogs seem to be more relaxed in EVs, particularly when looking at behavioural traits such as restlessness,” said Professor Mills.

“Additionally, an interesting and somewhat unintended revelation from the study came from the dogs that we identified as having potential symptoms associated with travel sickness.

“During their journeys in the EVs, biometric recordings of these dogs revealed their heart rates slowed markedly more than when they were in diesel cars.

“This was of particular interest to us given an increase in heart rate is commonly associated with motion sickness.

“It’s an intriguing result, which raised additional questions for exploration within this field.”

Millions of motorists stop driving during the winter 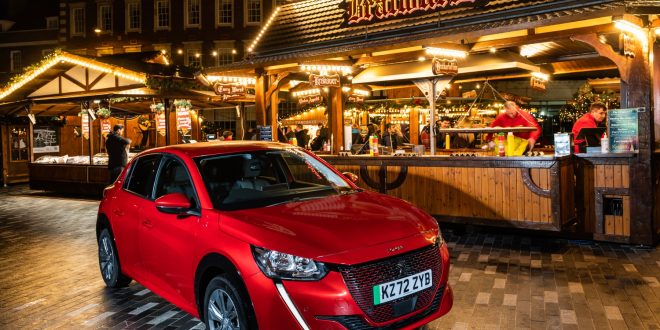 England’s best Christmas markets for electric vehicle drivers have been revealed in a new study, according to new research.

With Christmas market stalls being readied across the country, Peugeot UK researched which markets most suitable for EV drivers.

Using Visit England’s research of 14 popular Christmas markets in England, Peugeot compared how many of the markets could be driven to using the 225-mile range of the Peugeot e-208 from the 15 most populated cities in the UK.

The research also ranked how many public charging points were within a three-mile radius of the centre, as well as the charging speeds available, while accommodation options that offered free charging were also scored.

All top 10 Christmas markets, apart from Padstow’s Christmas Festival in Cornwall, were accessible from at least nine of the UK’s most populated cities.

Manchester’s Christmas Market was found to be the most accessible, with 14 cities in the UK within the 225-mile range of the market. Manchester also had the highest number of charging stations within a three-mile radius of the city centre, with 69 available, including 16 rapid chargers with speeds above 50kW.

The study also considered the number of accommodation options within three miles of the city centre that offer free charging for EV drivers, such as hotel chains and B&Bs, with York topping the tables, offering 19 with free chargers.

“With more than a million electric drivers on UK roads today, things like distance and charging infrastructure will play an important role in determining where drivers head to this Christmas,” said Julie David, Managing Director, Peugeot UK. 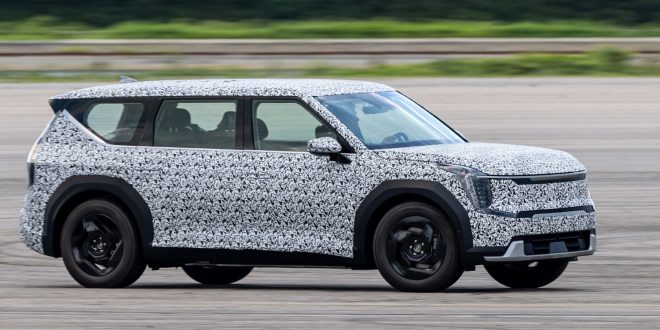 Kia has released new pictures of its 100% electric EV9 SUV undergoing rigorous testing ahead of its debut at the start of next year.

The EV9 will become the brand’s flagship model and Kia claims it will “revolutionise the large electric SUV segment”.

Developed over a period of 44 months at the Namyang research and development centre in South Korea, Kia says it will “set new standards in design, performance, range, driving dynamics, technology and comfort”.

First previewed in 2021 as the distinctive Concept EV9, it appears the show car’s imposing, boxy design, wraparound headlights and large glass area will make it over into the production vehicle.

In addition to the test programme at Namyang, like every Kia model, the EV9 has also been subjected to a punishing testing programme in locations all over the globe.

Classic Ferrari is ‘Best of the Best’ 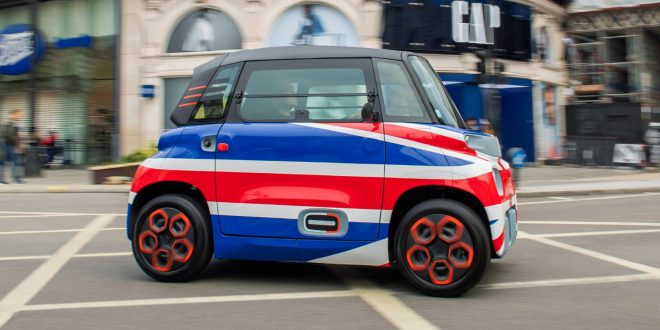 The cute Citroën Ami 100% electric mobility solution has been honoured in the Marie Claire Sustainability Awards 2022.

Technically a quadricycle, the two-seater is 100% recyclable, while 85% of its battery pack can be recycled and reused.

Priced from £7,695 and launching in the UK this summer, it produces zero emissions and it’s a perfect mode of transport for getting around cities and urban areas.

The Ami has a 5.5kWh battery that can be fully charged in just three hours. All versions feature a 6kW electric motor, enabling a top speed of 27.9mph, with a range of up to 46 miles.

Buyers can also run an Ami for just £19.99 per month on Personal Contract Purchase (PCP), over 24 months (with a customer deposit of just £2,369, plus an optional final payment to purchase the vehicle at the end of the contract).