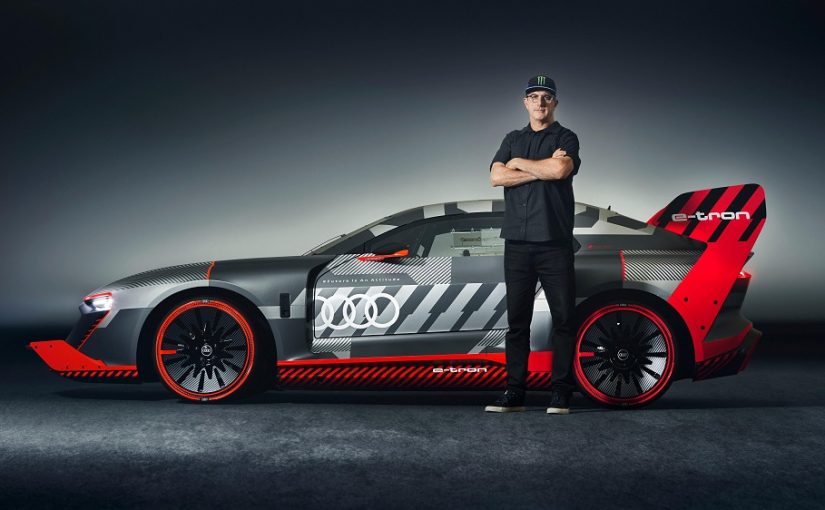 This reimagined version of the quattro S1 isn’t just the star of the forthcoming Elektrikhana video — it also meets FIA safety standards.

When Ken Block and Audi announced a partnership to develop electric vehicles back in September, there weren’t a lot of details on what to expect. But as I wrote at the time, anyone with a wisp of automotive awareness and more than two brain cells to rub together could predict the endeavor would produce some killer videos. That speculation, as un-wild as it might have been, was confirmed roughly a week later, when Block teased Electrickhana, a electrified version of his internet-breaking Gymkhana videos.

Now, we’ve gotten a look at the hero car — and it’s reimagined version of the legendary Audi Sport quattro S1. Dubbed the Hooniteron, this beast will sport a carbon fiber chassis, an electric motor at each axel, and lust-inspiring bodywork that looks at once both evolutionary and futuristic.  The name is a mash-up of Hoonigan and e-tron, and as Audi design chief Marc Lichte describes,  “the project was about about creating a modern, all-electric interpretation of the S1 Pikes Peak.”

If that doesn’t sound challenging enough? There was almost no time allotted to get it done. “While our design process normally takes one to one-and-a-half years, we only had four weeks from the first drawing to the final design,” said Lichte.

At this point, there aren’t a lot of details on the performance metrics, but according to the press release, the Hoonitron meets FIA safety standards, and is described as having “power galore.” Fortunately, Block was able to translate what that intriguing bit of info about the thrust level means when you’re behind the wheel:

Audi gave me the opportunity to test it for a few days in Germany. I’m familiar with a wide variety of cars using internal combustion engines and transmissions, but there were a lot of new things for me to learn here. Spinning into a donut at 150 km/h directly from standstill — just using my right foot — is an all-new experience for me. Our work was focused on getting the car and I used to each other.

How long it took Hoonigan-in-Chief Block to adapt to the instant torque of the electric powertrain is something we’ll likely learn in the future. In the meantime, the announcement says that fans can expect to see the new Elektrikhana video “shortly,” and released a teaser video to whet our appetites. Personally, I’m thrilled that this machine is up to snuff for the FIA, as after Block uses it to make the donuts, it’d be amazing to see it tackle Pikes Peak. Since the electric powertrain is immune to the challenges of high elevation hooning, it sure would prove advantageous in a record run…