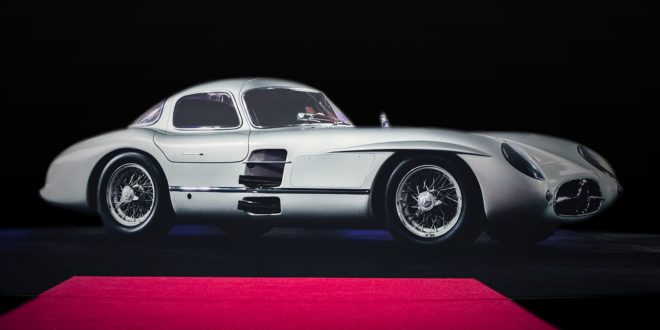 One of two Coupés ever built, it was the sister car to Stirling Moss’s iconic Mille Miglia-record-breaking, open-cockpit 300 SLR.

Both 300 SLR Coupés had remained at Mercedes-Benz since new. This car has been mostly kept in storage and has only covered 6,045km covered in its entire lifetime.

The winning bid was made by British expert and dealer Simon Kidston on behalf of a client, after lobbying the board of Mercedes-Benz for 18 months to consider selling the car.

All the money raised will benefit a charitable fund being set up by Mercedes-Benz.

It had always been assumed that Mercedes would never part with one of the crown jewels of its company collection, considered the ‘Mona Lisa’ of cars because of its rarity, racing pedigree, beauty and unavailability.

The 1955 Mercedes-Benz 300 SLR Coupé was a development of the open two-seat sports-racing car built by Mercedes for the 1955 season and driven by Grand Prix greats such as Stirling Moss, Juan Manuel Fangio and Peter Collins.

Heavily based on the company’s all-conquering W196 Grand Prix single-seater, the W196 S sports car was powered by a 302bhp, 3.0-litre straight-eight of great complexity, and dominated the 1955 World Sportscar Championship.

Moss’s record drive on the 1955 Mille Miglia has been described as one of the greatest-ever feats of motor racing.

Neither 300 SLR Coupé was raced, though they were used for practice. A road test jointly conducted by British magazine Autocar and Swiss periodical Automobil Revue in 1956 produced the following figures: 0-60mph 6.9sec; 0-120mph in 20.3sec; maximum speed 176.47mph.

“If you had asked classic car experts and top collectors over the past half a century to name the most desirable car in the world, there’s a good chance that they would have come up with the same model: the Mercedes-Benz 300 SLR,” explained Simon Kidston.

“It’s a combination of exotic engineering, all-conquering racing history, the power of the three-pointed star on its nose and the fact that one had never, ever been sold. Many collectors had tried, all had failed.

“That was what the entire motoring world thought, but times change, and if you don’t ask, you’ll never know.”