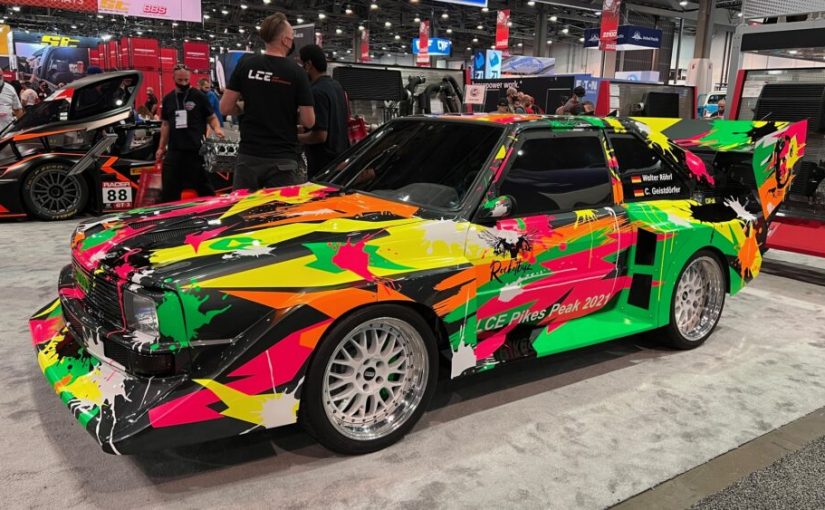 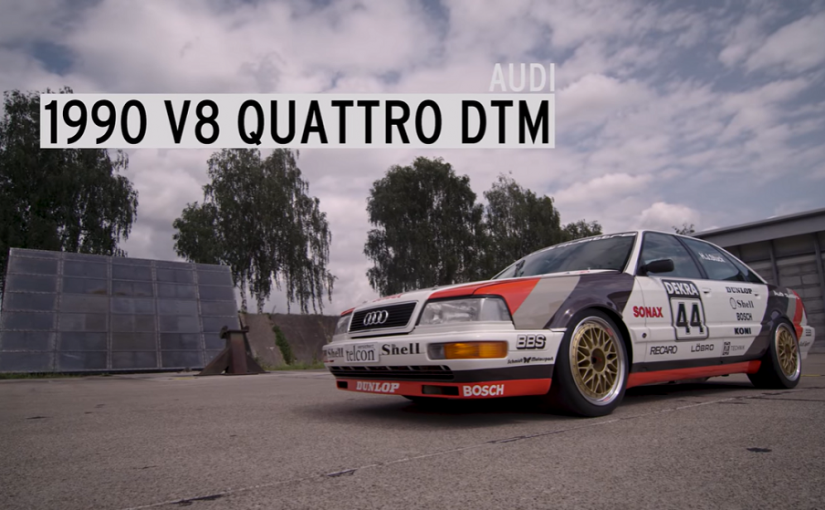 Audi was going to result in some epic videos. We have seen some already. And now we have another one. This time Block heads to Audi headquarters in Ingolstadt, Germany. From there he gets to choose two more ridiculous Audi racecars to hoon around in. They are both crazy fast, but they approach their speed in two very different ways. The first car is Hans Stuck’s championship-winning DTM car. The car is powered by a V8 engine that screams to 11,500 rpm. That is not a typo. 11,500 rpm from a V8. Then at Audi’s test track in Neuburg Block gets to drive the e-tron Vision GT. It may not scream like the V8, but it makes some pretty compelling noises of its own. The fun is all captured in a video recently posted on the Block’s YouTube channel.

Before we even get to the driving, we get a peek at some wonderful classic racecars in the Audi Museum. We suggest you have a towel nearby to wipe the drool off your desk. But before long it is time to drive, and Block is as excited as we are to get a turn in the DTM racecar. “I have never driven a high revving V8 Audi before.” Says Block. Somehow, we think he will get the hang of it fairly quickly. And the moment he fires up the V8 the smile on his face just says it all. 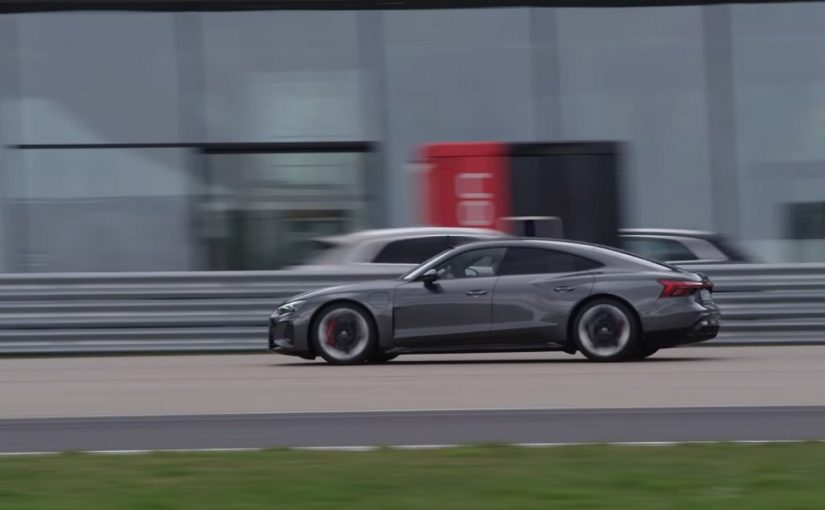 A new gymkhana-style video from Ken Block is in the works. But first, we get to watch him drive Audis old and new.

Last week, I wrote about how Ken Block’s new partnership with Audi means lots of cool videos are on the way — and the relationship is already paying dividends. According to the clip released this week, the first big project between Ingolstadt and Block will be a video titled Electrickhana, which unless I’m completely delusional, will be a gymkhana-style video using Audi’s latest all-electric hardware, like the RS Q e-tron. But that doesn’t mean we’ll have to wait to see Block flogging some Audis.

Here, we get to see the American rally driver get behind the wheel of the iconic Sport Quattro, and even for someone as accomplished as Block, it’s clear that’s a big deal for him. He’s previously said that watching that car dominate the competition was one of the reasons he became interested in motorsport in the first place, so getting to drive a literal museum piece is about as cool as it gets. Honestly? I’m surprised that we get to see him driving a gas-powered Audi at all, given that his day job is racing for Subaru. Sponsors can get prickly about that kind of thing, you know.

That said, as cool as the old rally machine weapon is, Block babies it a bit — and watching him rip around in the e-tron is more fun. He’s obviously having a blast, and even this little taste proves that if Audi was looking for an ambassador to convince people that going electric doesn’t mean swearing off driving pleasure? It did a great job. Given how choreographed Block’s previous videos were, I’m expecting greatness when Electrickhana drops, and I’m sure that it’ll break the internet.

The behind the scenes stuff is sure to be fascinating too, and I’m looking forward to learning about how the electric vehicles will have to be modified to accommodate Block’s precision, slide-happy style. I’m particularly curious as to how many of the driver aids mere mortals — like yours truly — will be able to defeat on the production models. Not because I think I’d be better without them, of course, but because doing donuts in a closed-off parking lot is one of life’s great joys. Keep your fingers crossed for a rowdy “drift mode” setting… 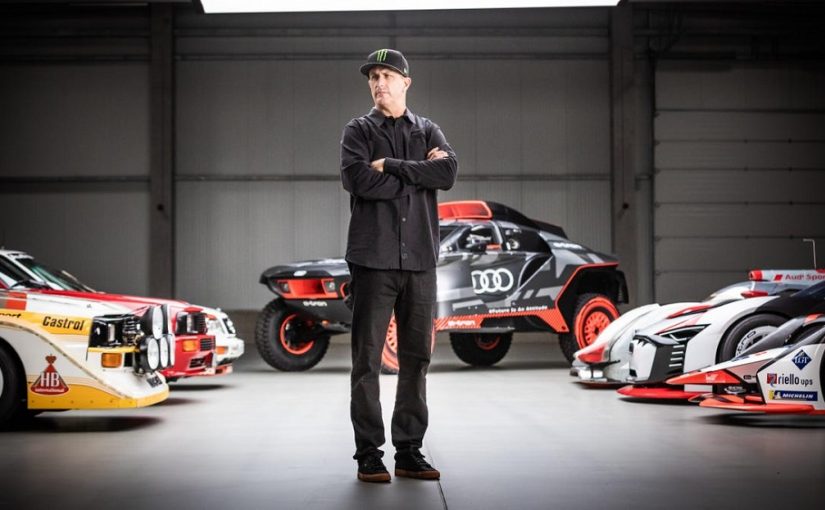 It’s not clear exactly what the partnership between Ken Block and Audi means just yet. Except videos. Lots of cool videos.

Unless you’re a smart device — think light bulb or refrigerator — and you’ve been on the internet at all in the last decade, Ken Block needs no introduction. After all, this is the man who turned  precision-grade hooning into global stardom. And now, he’ll be working with Audi on the development of electric vehicles. According to a statement from Block, the partnership will “develop innovative projects and push the boundaries of electric mobility.” So yup, not a lot of detail there just yet.

But you don’t need a crystal ball to predict that Block will be put to work on the motorsport side, to exploit the expertise he gained during his tenures in Global RallyCross, Rally America, and the World Rally Championship. So bet that he’s already talking with Audi’s Dakar team on the RS Q E-Tron racer, the electric beast that hopes to conquer the world’s hardest rally event. Since Block has already podiumed on the Dakar Rally — in an EV, no less — his input will likely prove invaluable.

One thing we can be certain of? There will be videos. Lots of ridiculously entertaining videos showcasing the cool new electric tech Audi is working on. So even if you’re not a fan of electric cars or rally machines, there will certainly be something about this partnership that floats your boat. Personally, I’m looking forward to seeing Block do some proper work behind the wheel of the new e-tron GT. Though I do have to wonder if the complicated electric drive system will allow for the car control magnificence we’ve come to expect from the Gymkhana legend.

In talking about what drew him to partner will Audi, Block said classic Audi rally videos were what drew him to motorsport to begin with. But since he’s partnered with Subaru for his petrol-powered racing efforts, don’t expect any videos of him ripping around in a classic quattro S1. That said, we’re sure to hear — and see — more about this exciting partnership soon, so stay tuned. Because whatever’s next here? It’s certain to be epic as all hell. For now, watch the teaser below.