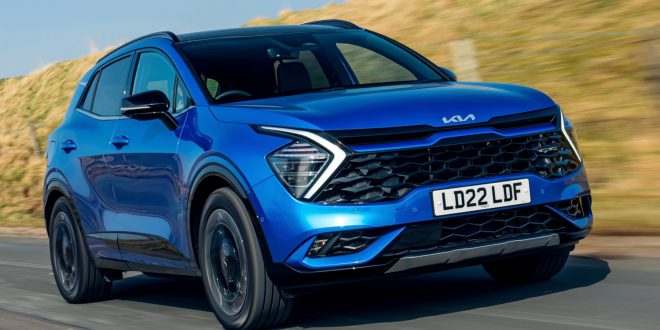 Earlier in 2022 Kia launched the superb fifth-generation Sportage – one of the most striking new crossovers on the road.

Rocking a bold, confident new design and hi-tech interior, it was initially available with a choice of petrol, diesel and hybrid (mild, self-charging) engines.

Now a plug-in hybrid version has joined the award-winning range – and the best just got better.

The good news is that it has a theoretical fuel economy of 252mpg, and an emissions-free EV driving range of up to 43 miles.

And with official overall CO2 emissions of 25g/km and 8% benefit in kind (BIK), it’s particularly attractive to company car users.

The Sportage is the South Korean brand’s best-selling car and the new model is already a firm fixture in the UK’s Top 10 most popular new cars.

The PHEV looks much the same as its conventional and lesser hybrid powered Sportage siblings, except for the extra ‘fuel’ flap for plugging it in (the battery can be fully charged in as little as 1hr 45m via a 7.2kW connection) and it has a slightly reduced boot capacity (down from 591 litres to 540 litres) because of the larger battery.

This powertrain combination delivers a total of 261bhp, a 0-60mph time of just 7.9 seconds, and a top speed of 119mph. What’s more, all plug-in hybrid versions of the Sportage get all-wheel drive.

Elsewhere, the Sportage PHEV is much the same as the rest of the range. In other words, it has serious road presence, echoing some of the futuristic styling cues of its pure electric big brother, the EV6.

Inside, it’s just as radical with a smart two-screen infotainment set-up. As standard, there’s a an 8.0-inch main touchscreen with Android Auto and Apple CarPlay and additional digital driver’s display on the right. From GT-Line spec up there’s a larger 12.3-inch screen in the centre.

The curved console is clear, bright, responsive and intuitive to use. There’s plenty of space for adults front and back, while the luggage capacity expands to a useful 1,715 litres when the 40:20:40 split rear seats are flipped.

On the road, the Sportage PHEV is easy to drive with light steering and a commanding driving position, delivering good all-round visibility.

The overall ride is on the firm side, but not uncomfortably so, and there’s a bit of roll in more challenging corners, but overall it’s a relaxed cruiser.

Switching from Eco to Sport mode alters the throttle and steering responses of the car, but stay in the latter for too long and it will dent your fuel economy (which can dip into the late 40s on longer runs when the battery has depleted).

In addition, there are two main drive modes – EV (prioritises battery power) and HEV (blends power from the engine too, which is more efficient on longer journeys), plus AWD terrain modes for Snow, Mud and Sand.

The PHEV powertrain delivers a surprising amount of poke and the switch from engine to electric and vice versa is seamless. The engine itself is refined, only becoming vocal if pushed hard.

A slick-shifting gearbox completes the picture. It’s a traditional automatic, as opposed to a high-revving CVT which so often blights hybrid driving experiences.

The PHEV is heavier than other Sportages, but it hides the extra battery weight well, while grip and traction are impressive, partly down to the AWD system.

The Sportage is packed with the latest safety and driver assistance kit including autonomous emergency braking (AEB) and, as with all Kia cars, it comes with a generous seven-year warranty.

Verdict: The plug-in hybrid version of the Kia Sportage is the highlight of an already fantastic family SUV line-up. Its blend of economy, striking looks, hi-tech interior, practicality, top safety features and peace of mind make it stand out from the crowd.