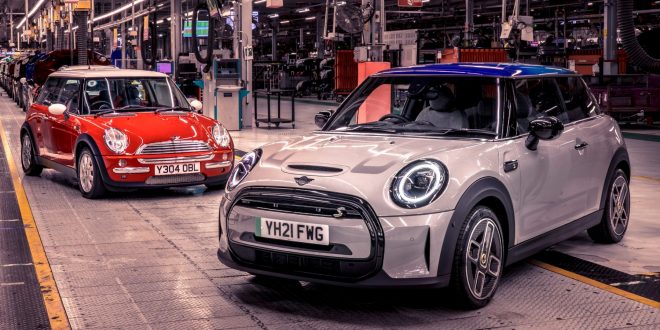 The one millionth MINI has been delivered in the UK, just over 20 years since the start of modern MINI production in 2001.

In all, MINI has sold more than 5.1 million cars globally in the past two decades, and the UK is the brand’s largest market.

The 3-Door Hatch, 5-Door Hatch, Clubman and Electric MINI models have all been built on the same production line at Plant Oxford.

What’s more, MINI Plants Oxford and Swindon employ 4,500 highly-skilled employees, including 130 apprentices, who all keep production moving to build 1,000 MINIs a day – one every 67 seconds.

“To have sold over one million MINIs in just 20 years is a remarkable milestone; we are all extremely proud,” said David George, Director of MINI UK.

“This achievement is testament to the fantastic cars we’ve built and launched during that time, our customers’ continued love for MINI, and the strength and unwavering dedication of our retail network.

“As we see the increasing demand for our MINI Electric and MINI Countryman Plug-In Hybrid models, which account for nearly a fifth of global electrified sales, we’re excited to see what the next 20 years hold, as we transition into our fully electric future.”

MINI will launch its last model with an internal combustion engine in 2025 and, by 2027, the share of all-electric vehicles in global MINI sales will be at least 50%. In the early 2030s, MINI will be the first BMW Group brand to go fully electric.

MINI UK has discovered the Top 10 wildest beauty locations in the UK, helping Countryman owners beat the busiest spots for an off the beaten track adventure this summer.

From waterways to peaks and underground caves, more than 100 nature-based destinations were identified and judged against two sets of criteria – popularity and wildness. The average of these scores then determined the best, undiscovered and wild hidden gems of 2021.

Taking the number one spot is Uyea in Shetland, Scotland, an uninhabited island which lies off the Northmavine peninsula and is only accessible at low tide. There are several natural arches along its rocky coastline and challenging rock climbs, making it the perfect destination for the avid adventurer.

MINI reckons the Countryman is the ideal companion for a wild, go-anywhere adventure, offering the perfect balance of space and versatility.

It has plenty of room on the inside to pack everything owners need to explore the great outdoors, plus the roof rack means bringing along bikes, surfboards or extra luggage is made easy.

To discover more than 100 hidden gem locations and find those closest to you, try MINI’s new interactive map.

What are the benefits of leasing a car?

Picture the scene: your car has stopped working or simply no longer meets your needs, …