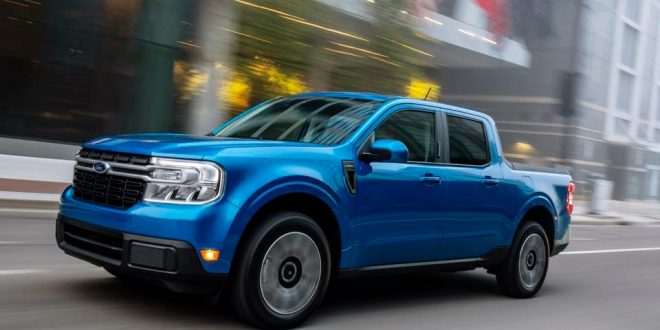 The Ford Ranger is not the only horse in the Ford stable any more.  The 2022 Ford Maverick is  a true hybrid truck with light capability and a slightly smaller figure than the Ranger.

The new Ford Maverick, which is being offered at a rock bottom price for the midsize segment, is expected to appeal to first-time car buyers and/or first-time truck buyers. It is also aiming for the trade market where busy people need hauling capacity, but they don’t want to pay for capability they don’t need.

Ford has made the hybrid standard on the entry level truck.  This allows buyers to get a vehicle that helps their budget at purchase and over time as they save money at the fuel pump.

The truck earns 40 miles per gallon in combined driving.  That figure could attract drivers who had been looking at new cars with much worse fuel economy.

Certainly this could cut into the Ford Ranger market, but it seems unlikely. Ford’s strategy of aiming for buyers new to the truck world may actually establish a whole new market that hasn’t been tapped.

Pros and Cons of the 2022 Ford Maverick

Trucks always come down to their stats.  In this case, the 2022 Ford Maverick can pull up to 2,000 pounds as a hybrid and up to 4,000 pounds with an Ecoboost engine. It can haul 1,500 pounds in its 4.5-foot bed. A multi-position tailgate allows the user to stretch the space.

The hybrid powertrain generates 191 horsepower, making it competitive with some bigger midsize four-cylinder trucks. Ford pairs that with a special PowerSplit transmission.  For drivers who want the truck with more power, they can get the Ecoboost engine which generates 250 horsepower.

Naturally there will be some shoppers who expect to tow much heavier loads. This truck cannot compete with the hauling and towing numbers on the Ford Ranger much less the Ford F150.

The Maverick’s material quality doesn’t start out on a par with the Ranger, and that may be a problem for some shoppers. However, there will be others who see the affordability factor overriding any worries about this.

The cabin will be much more comfortable for front-seat passengers than the second row.  It does have under-the-seat rear storage that you won’t find on a similarly priced SUV or car with a cabin this size.

On the other hand, the truck’s small size should work to its advantage in busy urban environments, which is how Ford planned it.  This is not a vehicle that will have trouble finding a parking space or maneuvering through tight quarters.

The manufacturer is definitely taking a gamble with the 2022 Ford Maverick. However, it would seem that this hybrid truck may make waves in the marketplace.