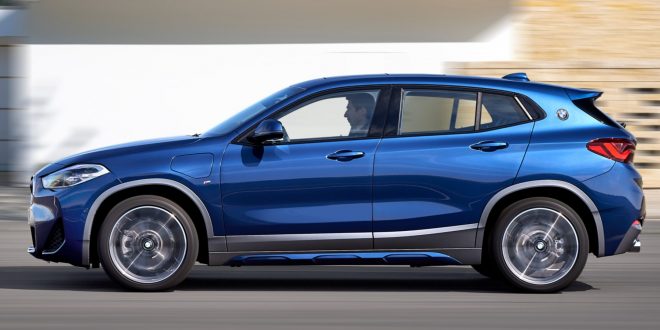 It’s not the BMW X2’s fault, but not long before I tested out the new plug-in hybrid version of this distinctively-styled, low-slung crossover, I was driving the latest BMW 330e saloon.

Re-reading my review, I concluded: “Frankly, it’s hard to criticise the 330e because it’s an almost perfect embodiment of a PHEV.” No pressure, there then for the X2.

However, the reality is that the difference between these BMW siblings is night and day, which is disappointing because I have a soft spot for the X2 – a car that dares to be different.

For starters, the 330e pairs a 2.0-litre four-cylinder engine (181bhp) and an electric motor powered by a lithium-ion battery, resulting in a combined output of 249bhp (or 289bhp for short bursts using the new ‘Xtraboost’ feature hidden in the Sport driving mode).

Opt for the rear-wheel drive model and the 0-62mph benchmark is reached in 6.1 seconds, while the xDrive four-wheel drive version is 0.2 seconds faster. Either way, top speed is 143mph and it has a pure electric range of up to 37 miles.

The X2 xDrive25e (yep, it’s a mouthful) isn’t far behind in the performance stakes, combining a three-cylinder 1.5-litre petrol turbo engine – also found in the MINI range – with an electric motor, producing 217bhp in total.

Four-wheel drive (xDrive) is achieved via the combustion engine powering the front wheels and the electric motor, which sits on the rear axle, while 0-62mph takes 6.8 seconds and it has a top speed of 121mph.

So, on paper the X2 PHEV is no slouch. More importantly for most buyers, it’s especially appealing for company car drivers looking to make significant tax savings because its vital CO2 emissions are as low as 39g/km.

Sadly, the 330e also shows up the X2 PHEV’s deficiencies. Everything from the dated interior to the way it handles.

Let’s start with the dashboard and infotainment system, which looks old school by today’s standards. As the 330e illustrates, things have rapidly moved on, so the plethora of dials and buttons seems odd, as does the CD slot, while adding postcodes to the sat nav using a daisywheel function via the rotary selector dial next to the gear lever is almost 20th Century.

Oh, yes, and it has a long-throw auto gear selector with gaiter, unlike the latest BMWs which are blessed with a tactile, stubby shift knob. Add the analogue dials in the instrument binnacle and it’s almost retro.

The X2 PHEV’s power delivery is punchy and it handles well enough – just not in the way we’ve come to expect from a BMW. Engineered more for comfort and economy than driver engagement, and not quite as refined as I would have hoped for, my week driving an X2 xDrive25e left me underwhelmed.

That said, as a sporty-looking, practical, eco crossover it makes absolute sense.

There’s room for five adults, and even though the battery eats into the X2’s boot capacity (reducing it from 470 to 410 litres), it’s still a useful space and it expands to 1,290 litres with the back seats flipped.

And like all plug-in hybrids, if you keep the battery charged (it takes 3-5 hours) and if you have a modest daily commute, your visits to the service station will be few and far between.

Priced from £39,390, the BMW X2 is up against some strong competition in the SUV premium PHEV sector, including its “little” brother (the X1), the Volvo XC40, Range Rover Evoque and Audi Q3.

We’re already big fans of the fourth generation Seat Leon. In our 2020 review, we concluded that it’s “one of the most accomplished family hatchbacks on the market, offering affordability, economy, tech, refinement, space and driving pleasure”.

Fast forward to 2021 and the petrol and diesel models have been joined by a plug-in hybrid, delivering a potential 235mpg with CO2 emissions as low as 27g/km.

Using pretty much the same tried and tested system also seen in the Audi A3 40 TFSIe, Volkswagen Golf GTE and Skoda Octavia iV, a 1.4-litre petrol turbo engine is mated to a 12.8kWh battery and 85kW e-motor, giving a useful combined output of 201bhp, resulting in a 0-62mph time of 7.5 seconds and a 137mph top speed.

Most importantly of all for some (especially if you use your car locally or have a modest daily commute), it can run electric-only for up to 36 miles.

In other words, as with all PHEVs, the Leon e-Hybrid offers an introduction to EV driving, without the range anxiety – the perfect stepping stone between the internal combustion engine and going 100% electric.

Apart from the extra fuel flap (for plugging into a charger) and modest badging, externally it looks much the same as a regular Leon – which is no bad thing, because it’s a stylish car.

Open the hatch, and there’s more hybrid evidence. The Leon e-Hybrid has a supermini luggage capacity of 270 litres (down 110 litres on the standard petrol or diesel), because the hybrid battery pack takes up extra space. On the plus side, there’s a useful 1,191 litres when the rear seats are folded.

The cabin in unaffected, which means there’s room in the back seats for adults to sit comfortably. It’s generally well designed, and quality is good, but not outstanding. There are some soft-touch surfaces high up in the cabin, but – as you’d expect at the more affordable end of the market – there’s a lot of scratchy hard plastic lower down.

At launch there are five trim levels (FR, FR First Edition, FR Sport, Xcellence, Xcellence Lux) with price points between £31,835-£35,060. While this is competitive in its sector, it would be great if all manufacturers could start bringing the start price of PHEVs down closer to £25,000.

All models also get a flash 10-inch infotainment system, which gives the dashboard a more minimalist look, but the touchscreen contains a little too much basic functionality for our liking – even the temperature controls are integrated.

The e-Hybrid starts up in electric mode and stays that way until the battery pack is flat. However, the engine will kick in if you floor the accelerator or you switch to hybrid mode, which combines petrol and electric power for better economy and battery life.

Like all PHEVs, it can also recharge via regenerative braking, which slows the car down and collects energy to charge up the battery and increase the vehicle range. That said, the most effective way is to plug it in at home overnight or use a public charger (both 4-5 hours).

With electricity costing around a third of petrol per mile, that’s cheap motoring. Add tax savings for business drivers and other perks such as lower Road Tax (VED) and exemption from the London Congestion Charge, running a plug-in hybrid makes sense.

In the real world your fuel consumption will depend on a number of factors, such as whether you start your journey with a full battery charge, the temperature, your driving style, and the types of roads your encounter.

Seat quotes potential fuel economy of 235mpg, but the reality is that once you’ve used up the battery charge, you can end up with fuel economy comparable to a diesel (50-60mpg) – lower on long journeys.

On the road, the e-Hybrid accelerates briskly and the switch from electric to engine power and vice versa is seamless.

Naturally, it’s almost silent when running in pure electric mode, while the 1.4-litre petrol engine is generally refined, but becomes a little more vocal when pushed.

The ride is on the firm side, but not uncomfortably so, allowing it to stay composed and relatively flat in faster corners. It’s no hot hatch, but more spirited drivers can select Sport mode for a little extra fun.

It feels light and agile on the road, there’s plenty of grip and the steering is sharp. The six-speed DSG automatic gearbox fitted to our test car is one of the best, though not quite as punchy through the gears as we’d like.

It’s safe too – the e-Hybrid received a maximum five-star safety evaluation rating from Euro NCAP, just like its regular petrol and diesel stablemates, with AEB standard across the range and other driver assistance aids including Cruise Control and Lane Keep Assist available.