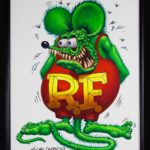 A trip to one of the most eclectic auctions this year – RM Sotherby’s at the Petersen Museum – and coming face-to-face with the iconic ‘Rat Fink’, relieves Jim Palam’s decades-old car guy guilt. Here’s his photo-report. 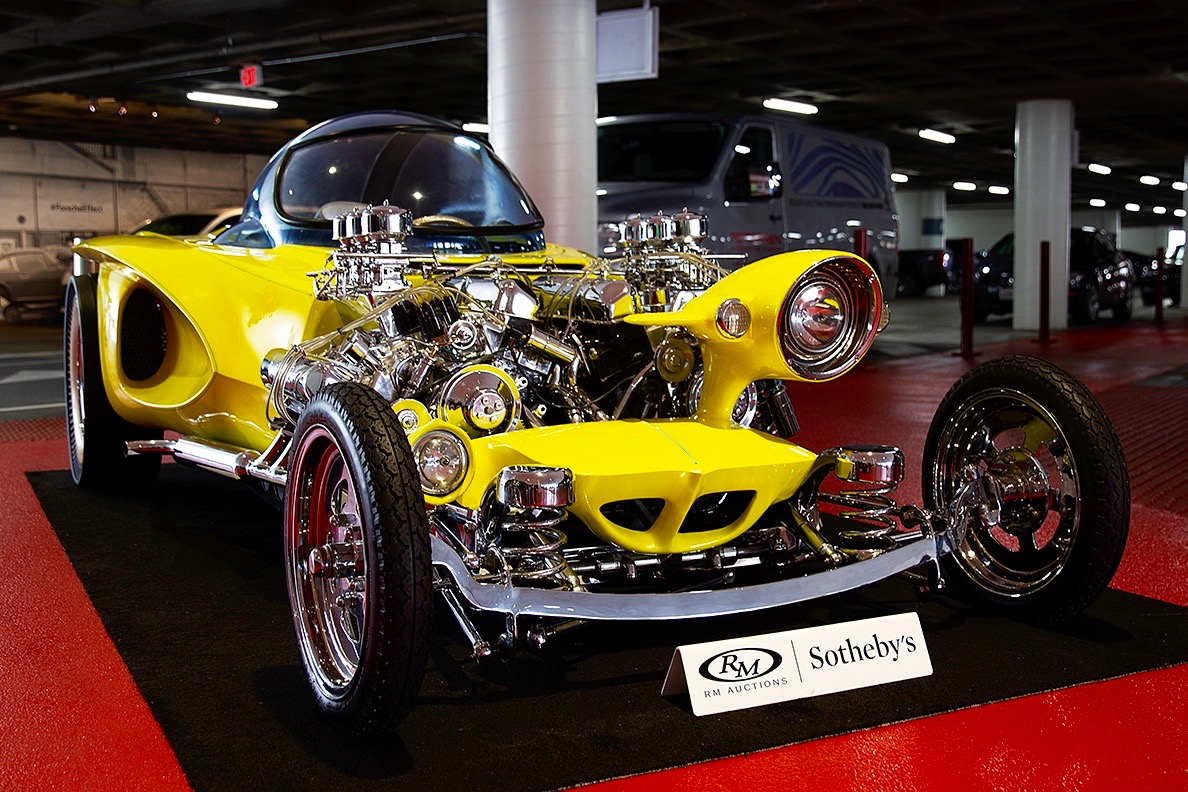 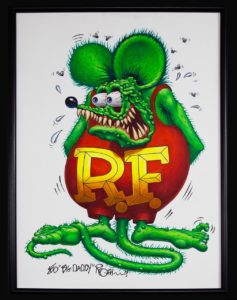 It was weighing me down, this Car Guy guilt I’ve been lugging around since I moved to California in 1976. How was it that in all these years I had never visited the Petersen Automotive Museum in Los Angeles? I really didn’t have an excuse, so when I received an invitation from RM Sotheby’s to attend their final auction of 2018 at the Petersen – showcasing 64 blue-chip collector cars and original Kustom Kulture art by Ed “Big Daddy” Roth and Von Dutch – my eyes bulged like Roth’s ‘Rat Fink’ icon and I excitedly RSVP’d.

As soon as I pulled-into the Petersen’s parking structure on Saturday morning that heavy weight of guilt lifted. There, just beyond the kiosk gate, was an ‘06 Ford GT, a ’27 Ford ‘Track Nose’ Roadster and a Kool recreation of Roth’s ’62 Mysterion Kustom. As the gate lifted I drove past the auction cars that were neatly displayed and dramatically lit.

“This is where dreams are parked,” I thought as I exited my vehicle, grabbed my camera and started my special day – finally – at the Petersen. Let’s take a look at what I discovered…

If you grew up in the 1960s you may not have known who Ed “Big Daddy” Roth was, but you probably had seen his comically grotesque creation, “Rat Fink.” R.F. first appeared in the July 1963 issue of Car Craft and is still to this day one of the most famous symbols associated with the Kustom Kulture movement. This original, full-color version of R.F., above, right, sold for $12,600. There’s no way Mysterion, top, and its big-eye, – parked in front of the kiosk gate – wasn’t going to hypnotize you. This functioning recreation of Ed Roth’s ‘62 twin-engine custom by petroleum engineer Jeff Jones sold for $246,400 – more than double the low-end auction estimate. 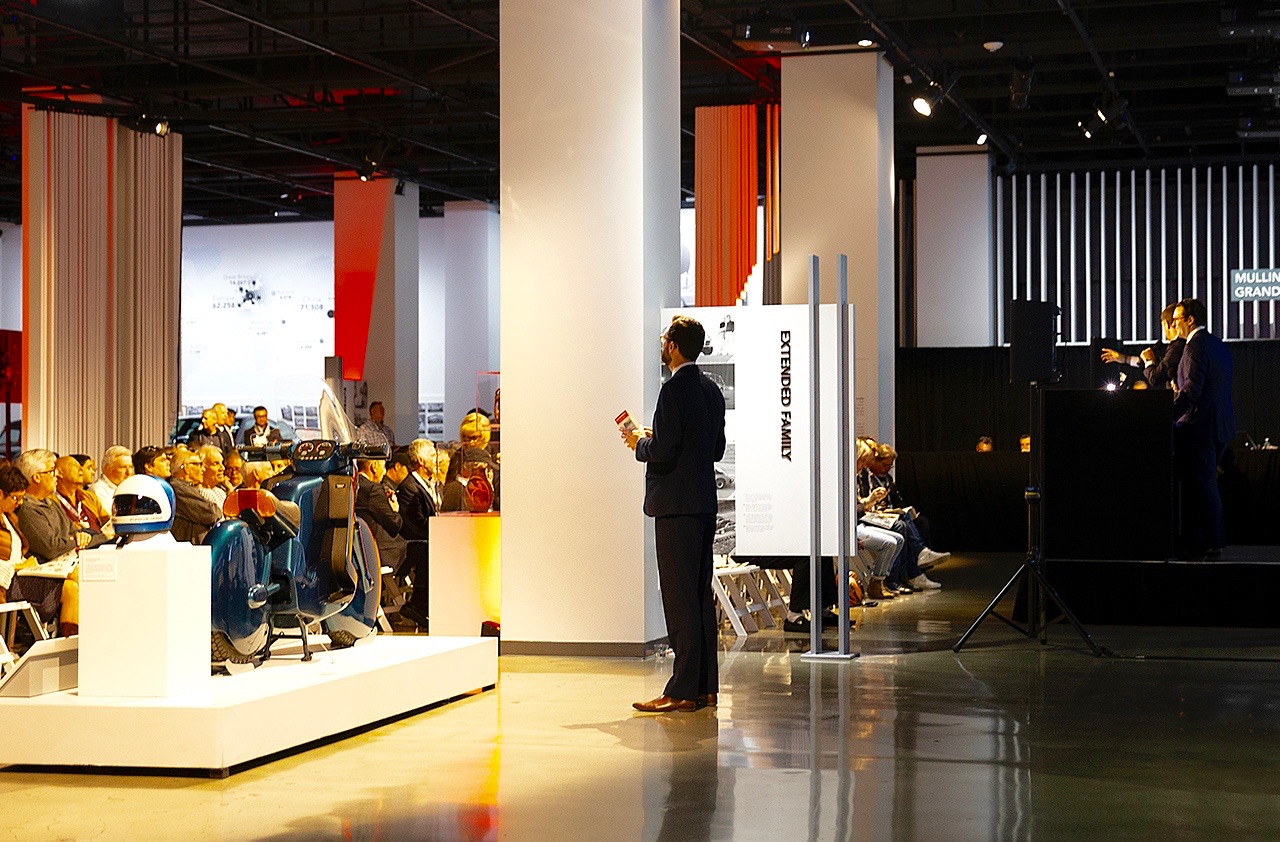 Bidders and guests were treated to a Champagne Brunch in the preview areas before the auction. Once bidding commenced inside the museum the scene was quite proper and efficiently directed by the RM Sotheby’s and Petersen’s teams. I kept thinking, “This is Hollywood, Baby.” Everyone was well rehearsed and on their marks. When the final hammer fell, sales totaled $40 Million with 88% of all lots sold. 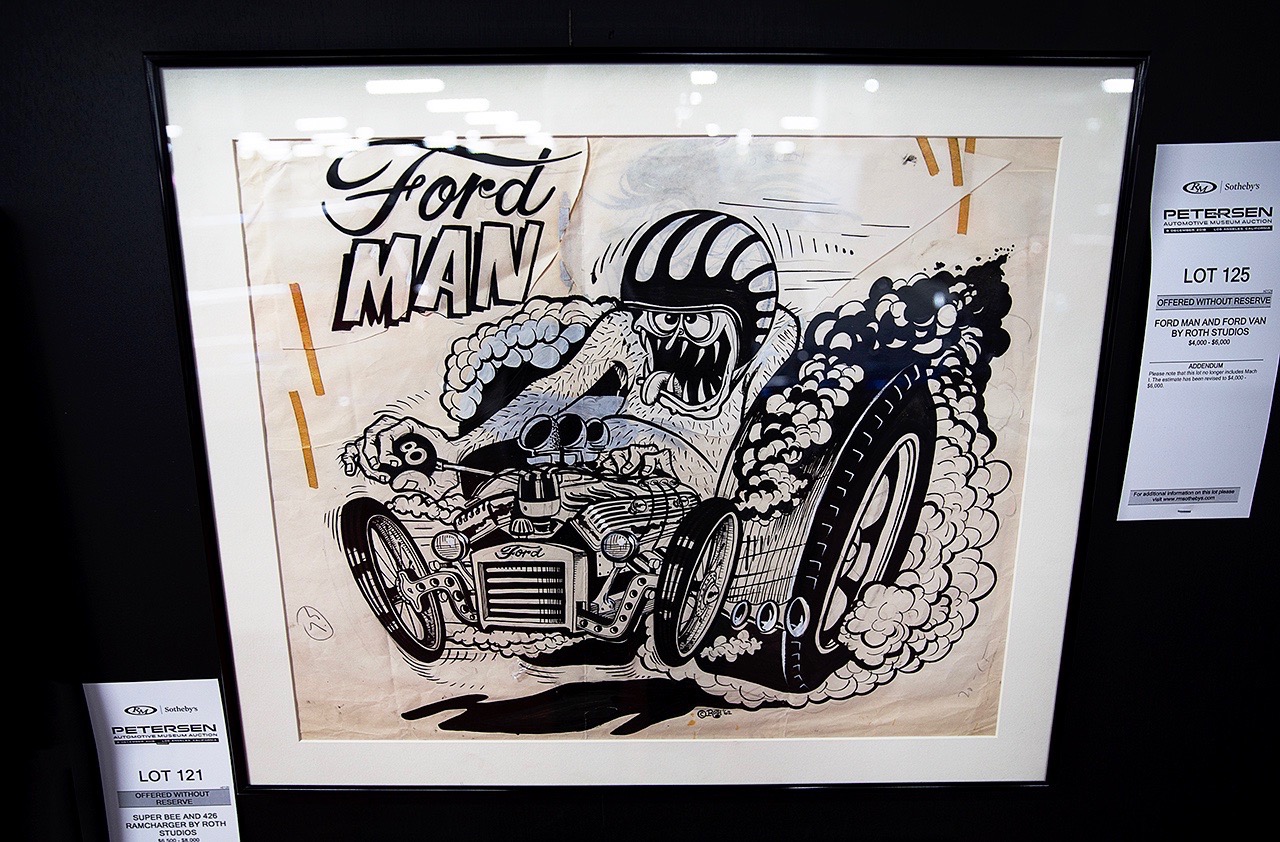 Original artwork by Ed Roth and Von Dutch was displayed on the walls of the parking structure surrounding the auction vehicles. It was hard to select just one to feature here but Roth’s “Ford Man” is a great, surviving example. It showcases how pre-computer pen and ink illustrations were often made camera-ready by taping or gluing vellum refinement layers together. “Ford Man” sold with a companion illustration, “Ford Van” for $12,000. 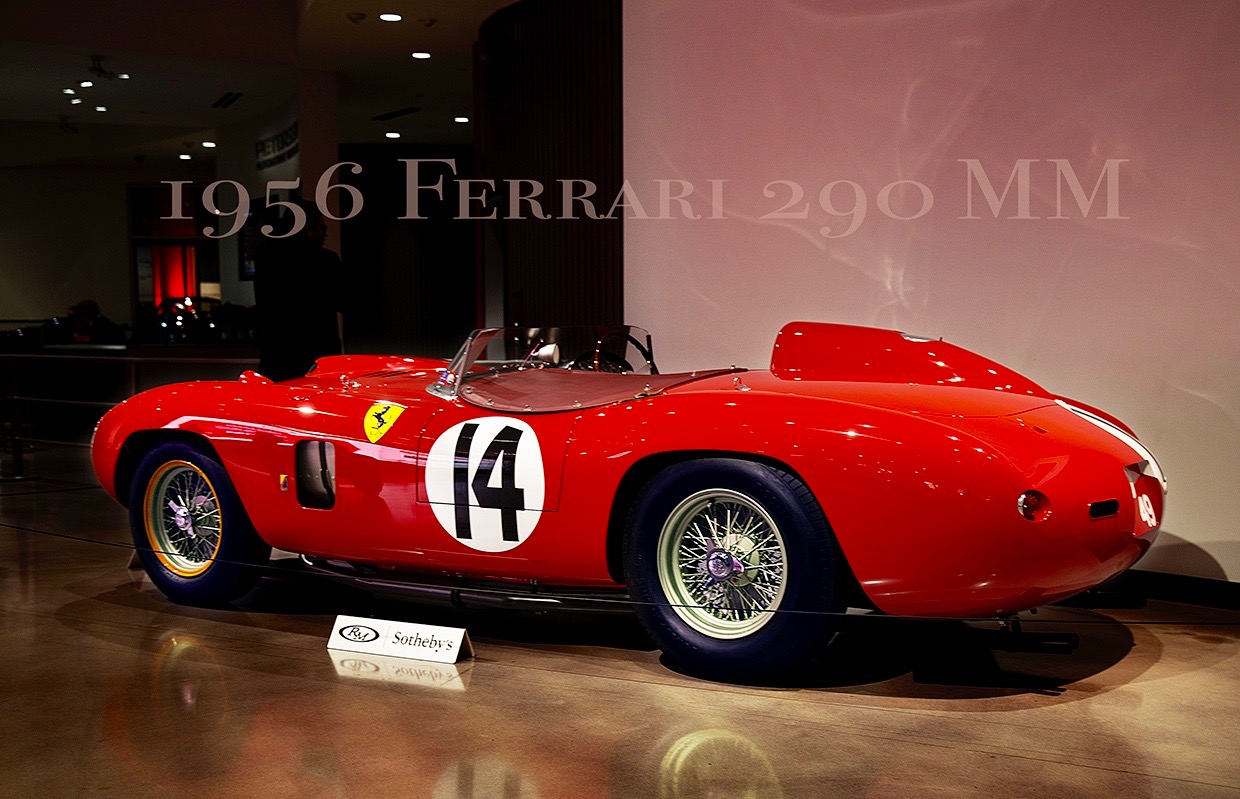 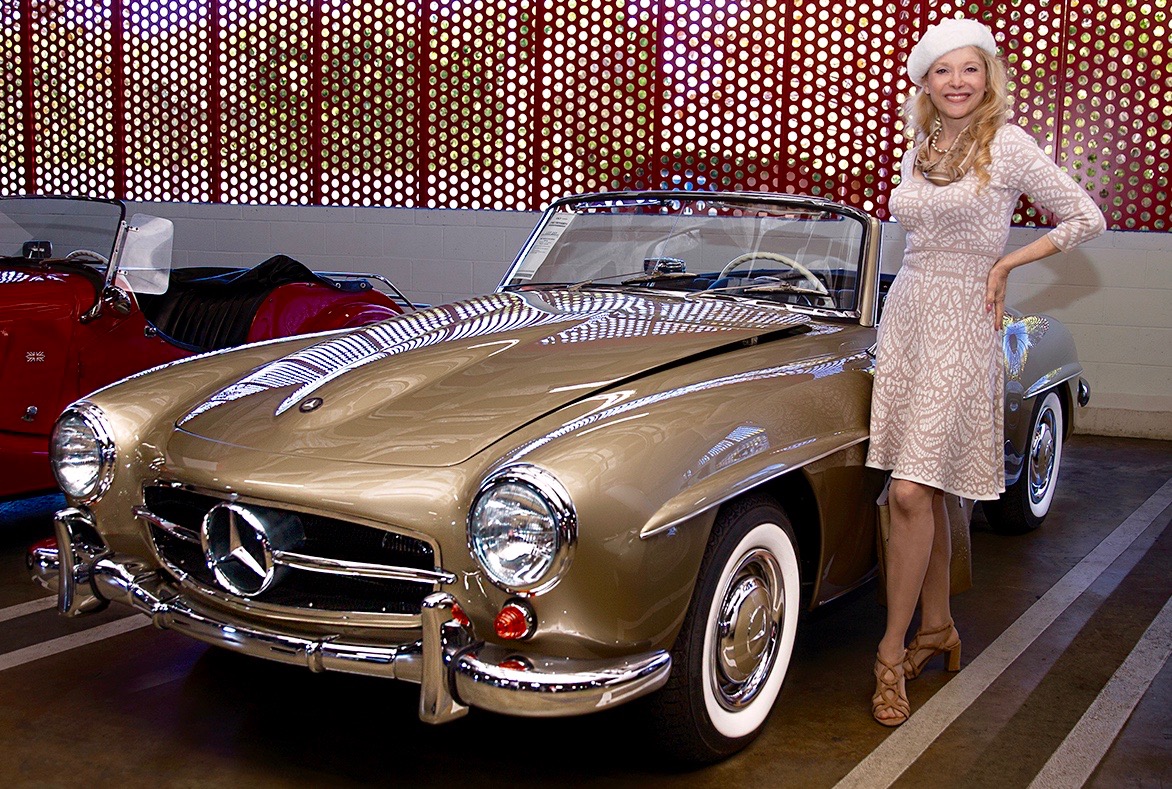 Maybe it was her white beret that first caught my eye, but I knew I just had to ask her if she would mind posing by one of the classics. She hesitated for a moment, then grabbed my arm and quickly pulled me over to the ‘61Mercedes-Benz 190 SL. “This color compliments my outfit” she said and then, unprompted, immediately started striking poses. “Hollywood, Baby” I thought. 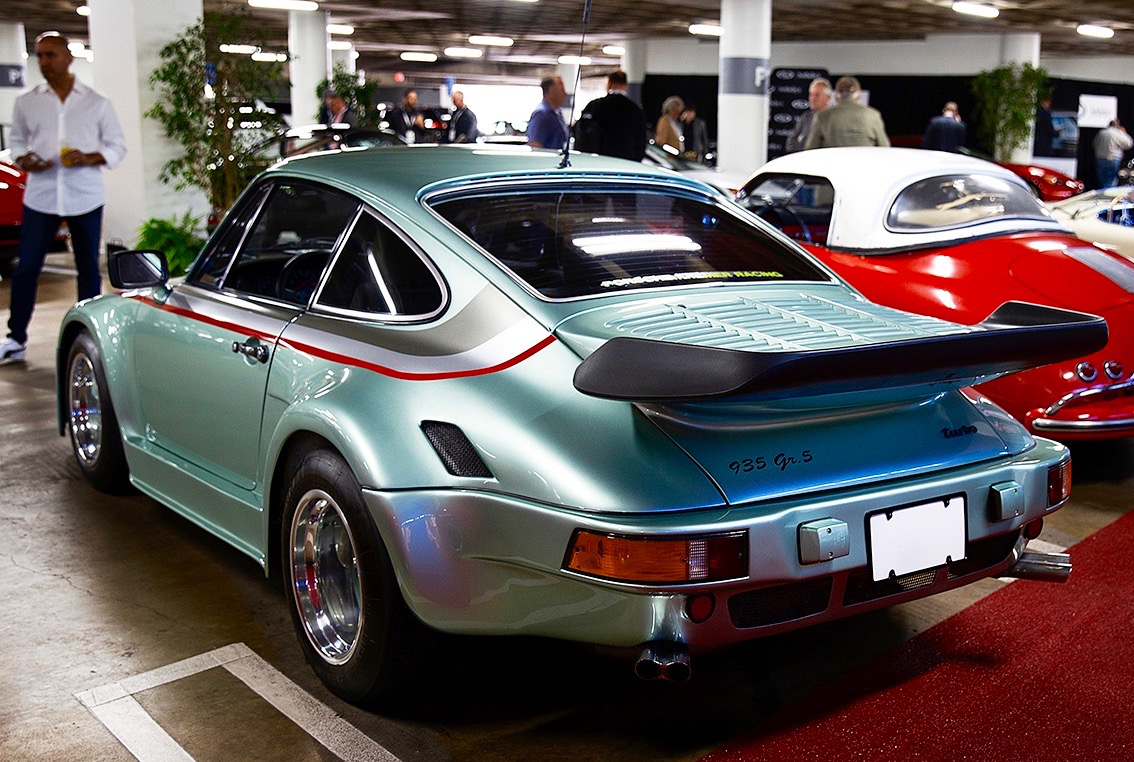 This very rare ‘76 Porsche 935 Turbo was re-imagined for its original owner in Germany by Kremer Racing, thus becoming a Group 5 racecar. It has a 3.0-liter turbocharged flat six engine, paired to a four-speed transaxle, and less than 41,000 miles on its odometer. It fetched $173,600 at the hammer. 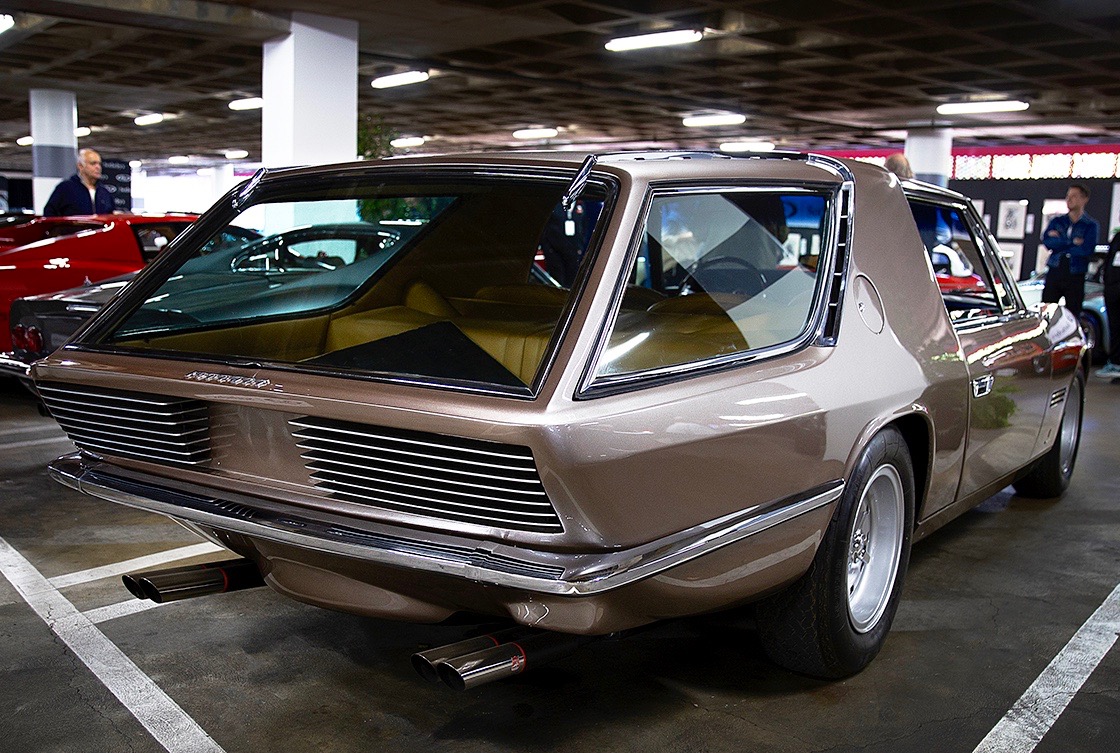 This unique Ferrari started life as a ‘65 330 GT Series II with Pininfarina coachwork. In 1967 it was transformed by Chinetti Motors and re-bodied as a ‘shooting brake’. Today the car is powered by a 300-horsepower SOHC V-12 and presented in sophisticated bronze metallic. It sold for $313,000, inclusive of buyer’s fee. 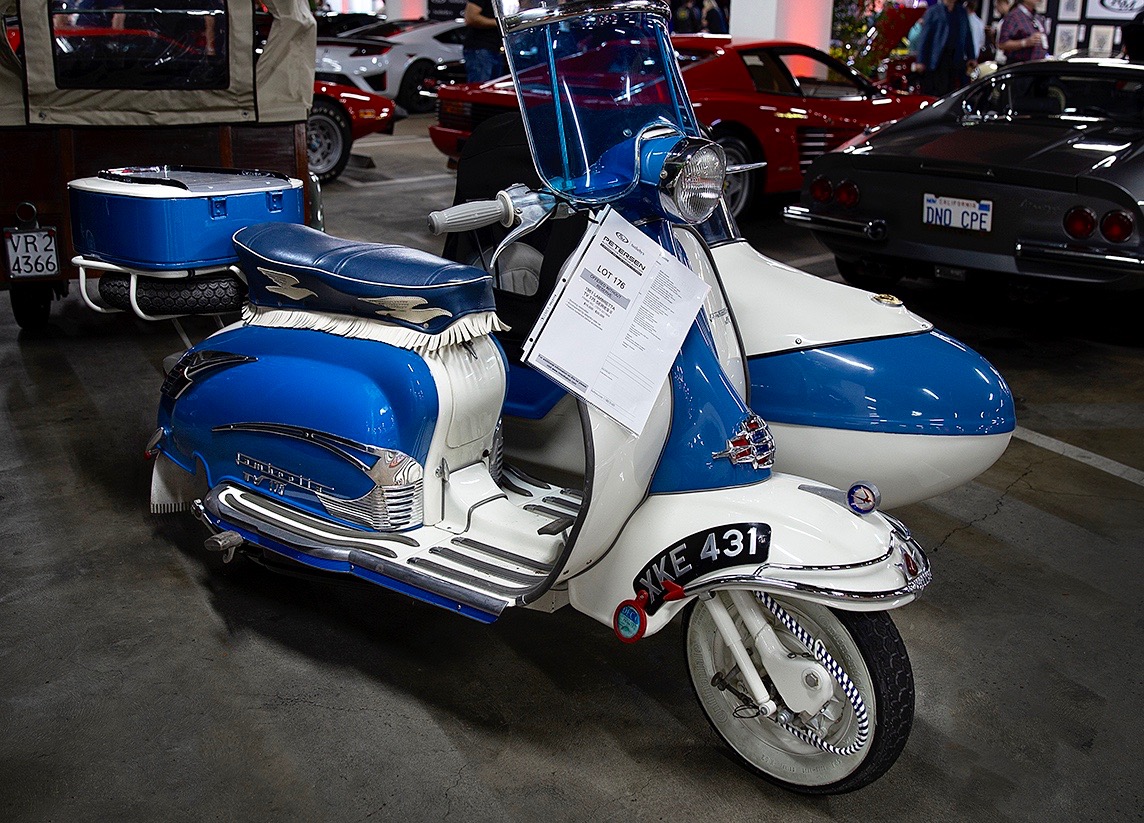 Motor scooters were introduced to post-war Italians as affordable, easy-to-use, compact transportation. The first Lambretta became available in 1947. This sharp, two-tone, tasseled-leather ’61 Lambretta TV 175 Series II was meticulously restored and adorned with period accessories. It zipped to $33,600 as the hammer came down. 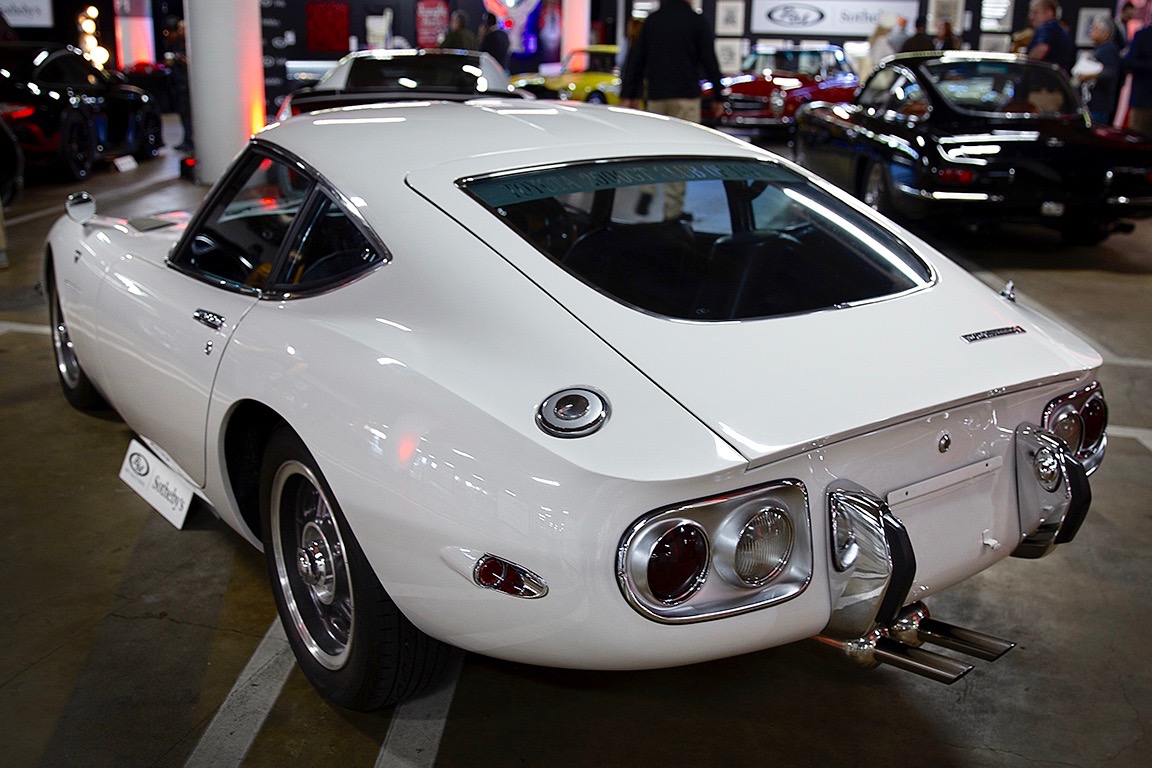 Did you know that Toyota 2000 GTs could be refitted with roller-coaster wheels? Just kidding of course, but that fantasy option just might be what’s needed to keep owners calm as the car’s value rises and falls from auction to auction. Still a smart investment for those who grabbed them early-on, this pristine Pegasus White, right-hand drive ’67 hammered at $511,000, inclusive of the buyer’s fee. 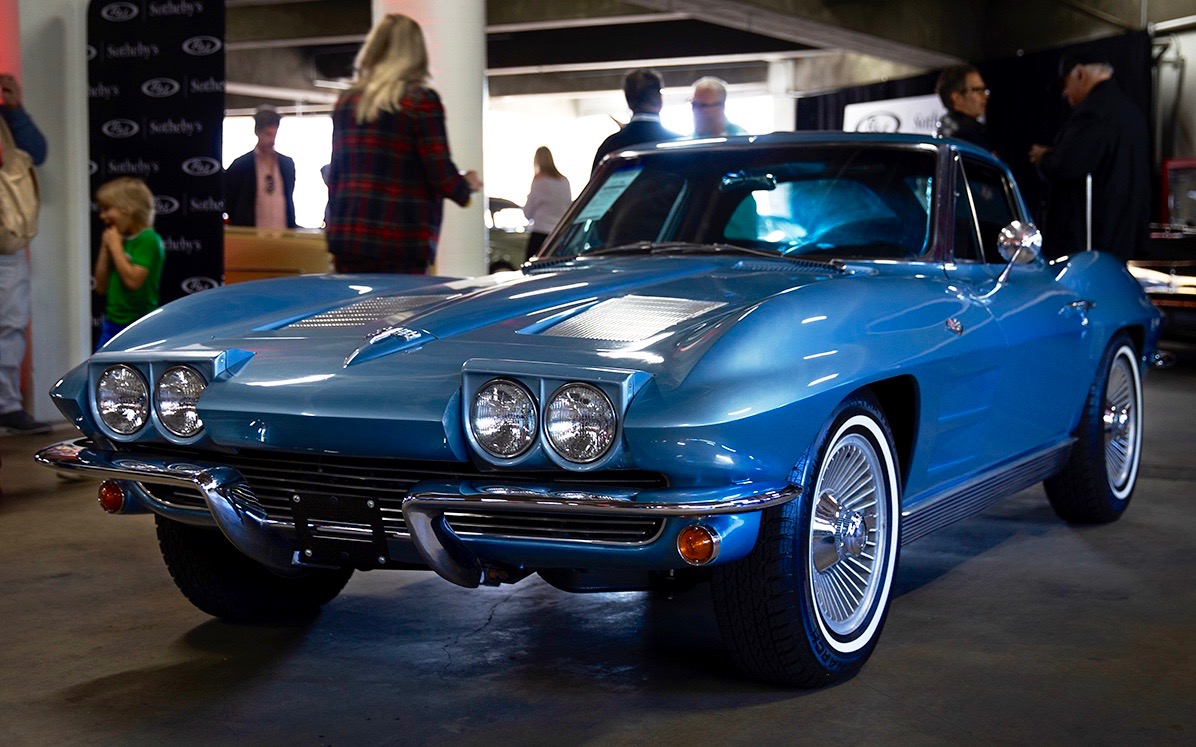 It’s 1963 and you’ve got $5,700 burning a hole in your pocket. If you’re Bryan A. Frame of Waukesha, WI you know what to do – buy this one-year-only split-window Sting Ray. Optioned with the L75 300-horsepower 327, Powerglide transmission, AM/FM radio and rare factory air, this unmolested Silver Blue Corvette sold for $89,600, inclusive of the buyer’s fee. Nicely done! 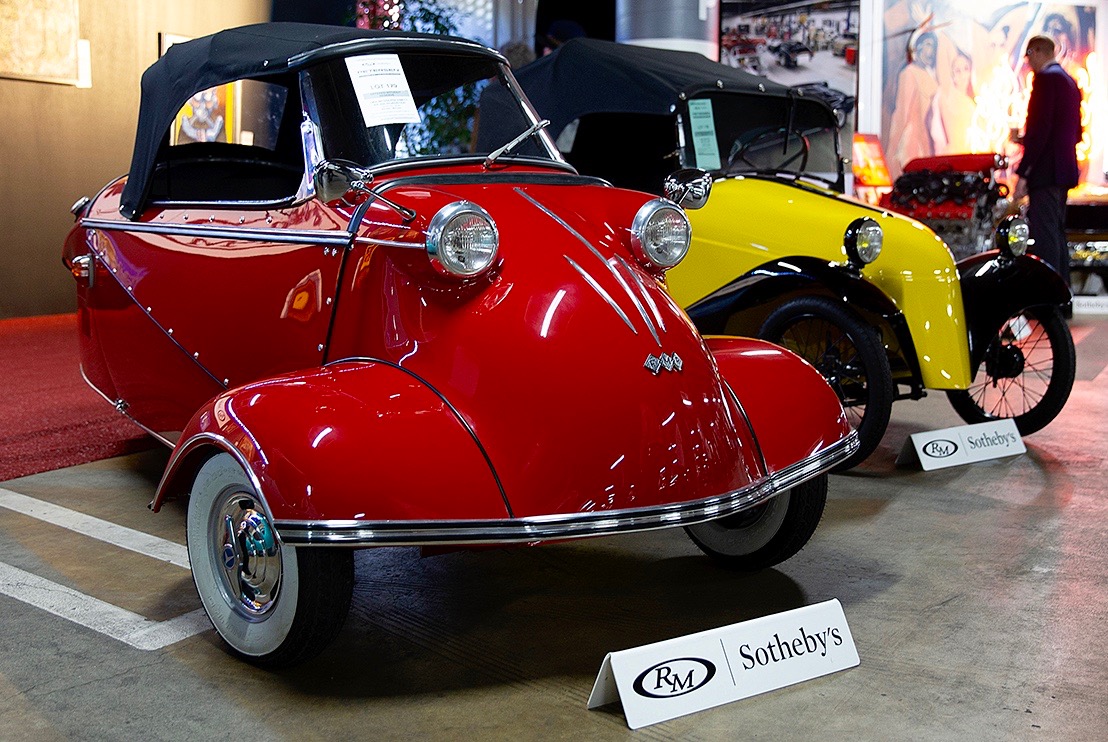 The Messerschmitt is considered by many to be the most desirable Microcar. This Rompin’ Red ’64 Messerschmitt KR 200 is the second-to-last produced and even better, it’s a very rare roadster. It underwent a nuts-and-bolts restoration and a KR201 snakeskin upholstery upgrade. Selling for $57,120 inclusive of buyer’s fees was a reminder that Microcars may be small, but they are still hot. 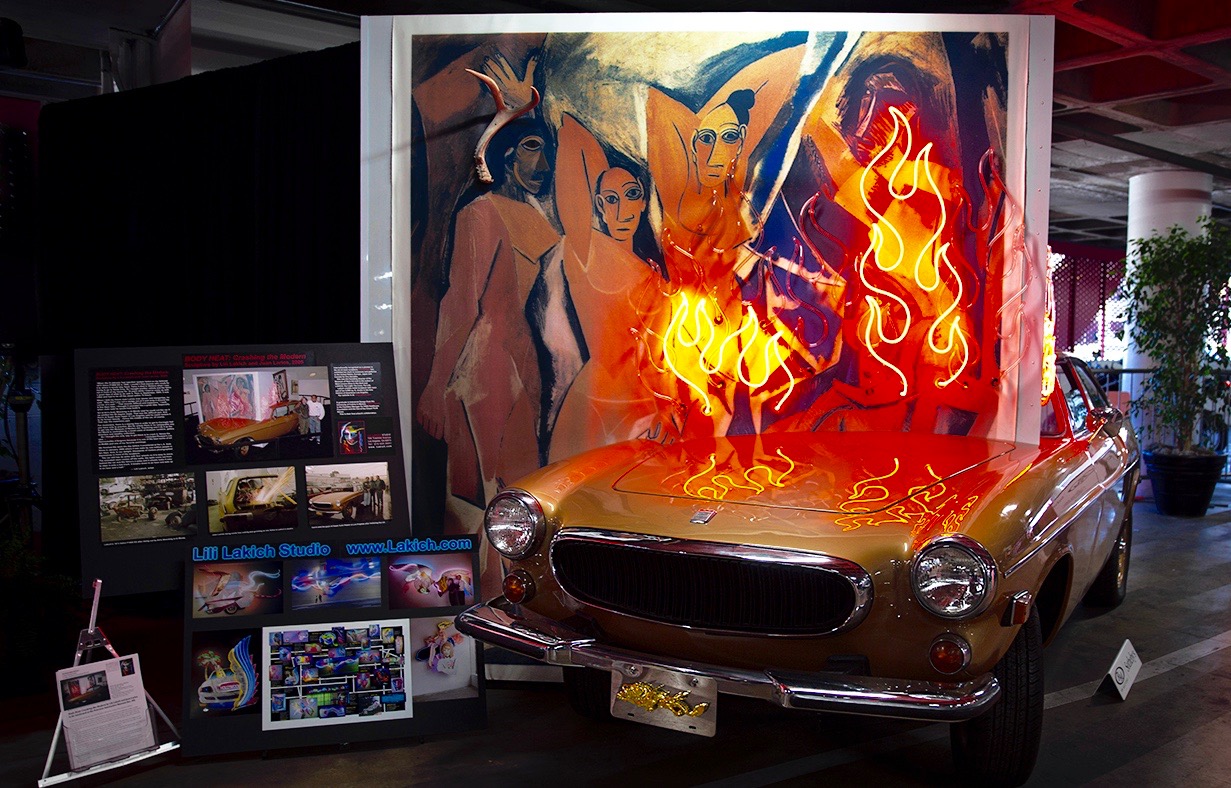 OK, here’s fuel for the Car World/Art World fire. Neon artist Lili Lakish’s ‘73 Volvo P1800 ES had a fuel injection failure in 1990. Not able to find a mechanic capable of repairing the car (really?) she and her artist friend Juan Carlos hired some car guys to cut a big wedge-shape out of the Volvo. They then constructed a flaming neon art corner wall into the void. The finished work was titled ‘Body Heat – Crashing the Modern’ with hopes of getting the art into the Museum of Modern Art. This car art sold for $18,000 at the Petersen. 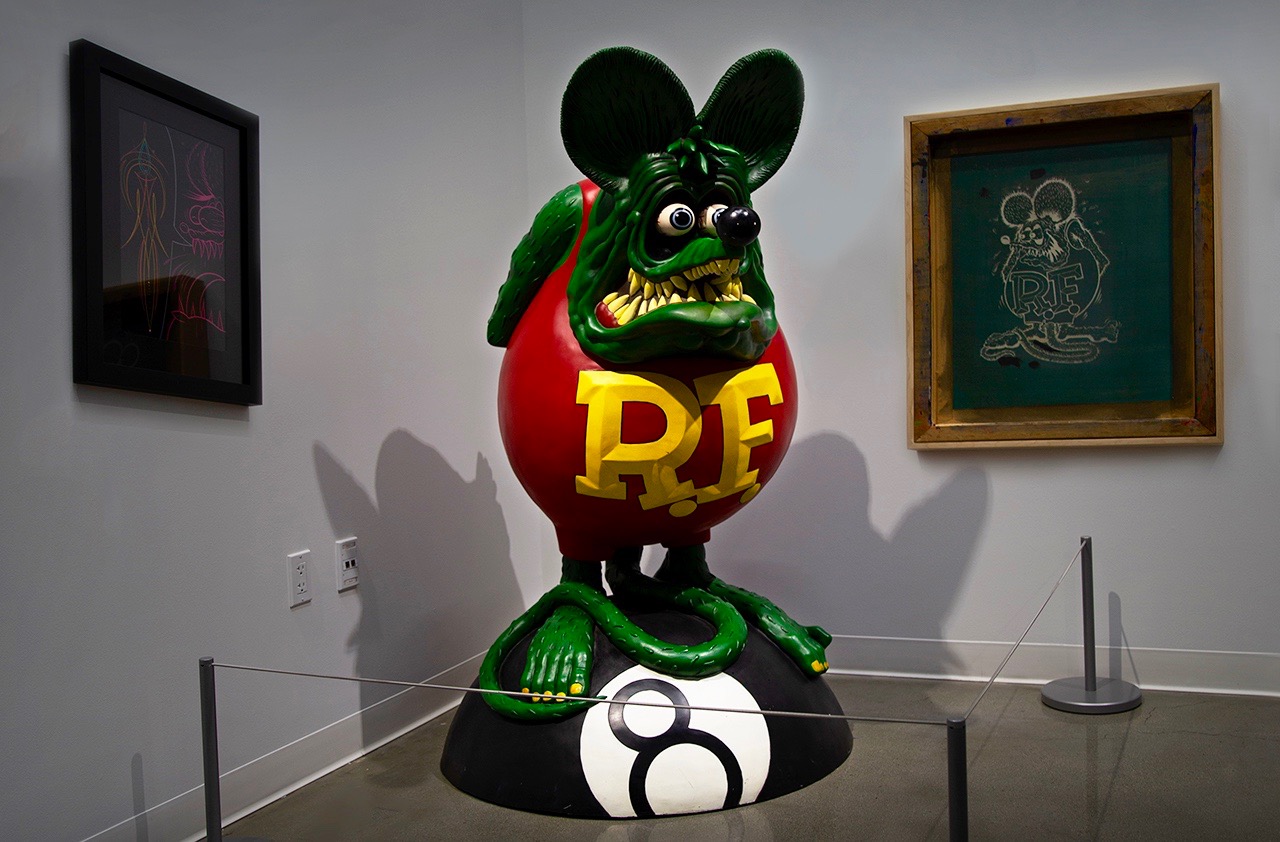 Having secured my auction images and notes I decided I’d take a peek around the museum before I headed back home. Just steps away from the auction room was the Armand Hammer Foundation Gallery which is currently featuring the Auto-Didactic: The Juxtapoz School exhibition, which showcases high-concept art by lowbrow artists. In a back corner of the gallery stood a human-size statue of Rat Fink. I paused in front and thanked him for finally pulling me in to the Petersen and helping to lift the weight of my Car Guy guilt. Like everything’s Kool now, man!

To learn more about the incredible Petersen Museum, check out https://www.petersen.org/