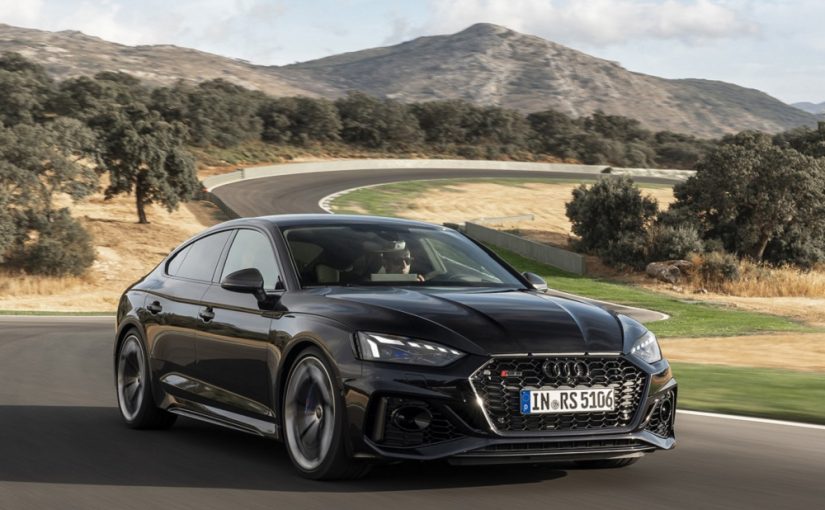 With a suite of new upgrades, Audi has made the RS 4 and RS 5 even more engaging to drive.

On the heels of announcing the the final run of its R8 supercar, Audi has released info about two new packages available for the its RS 4 and RS 5. And unlike the race-inspired V10 model, these won’t be limited edition. Both the Competition and Competition Plus upgrades will be available to any buyers who can pony up for the additional kit.

While the neither package adds power to the twin-turbo V6, the upgrades are designed to make the cars more responsive and more fun to drive. Thanks to a new tune, the zero-to-60 sprint has dropped by 0.2 seconds in the RS 4 and 0.1 seconds in the RS 5, and top speed for both models has been bumped to a ballistic 180 mph.

There’s also a new performance exhaust system, which will sound even better thanks to Audi ditching 18 pounds of sound insulation from the firewall. Plus, tweaks to the quattro system mean more twist will be pumped to the rear wheels, and shift points have also been adjusted to provide more aggressive gear changes.

Unique 20-inch wheels will be standard on Performance models, and they’ll be shod with super sticky Pirelli Corsa P Zero tires. To better scrub speed, carbon-ceramic brakes will be available for both models. In addition to cutting the 60-to-zero stopping distance by six feet, they’ll also mean drivers will be able to run laps without being concerned with brake fade on the track.

Performance Plus models will get a trick suspension system which drops the standard ride height by 10 millimeters, and also allows drivers to drop it another 10 millimeters via the vehicle settings. For the mathematically challenged, that means these sporty versions will be up to 20 millimeters lower than base models.

Of course, there are some cosmetic touches as well, including the carbon fiber accents inside the cabin, dark trim on the exterior, black tips on the performance exhaust system, and an available Sebring Black finish. Unfortunately, the RS 4 Avant still won’t be an option for American buyers, so we’ll just have to make due with the coupe and Sportback versions of the RS 5. 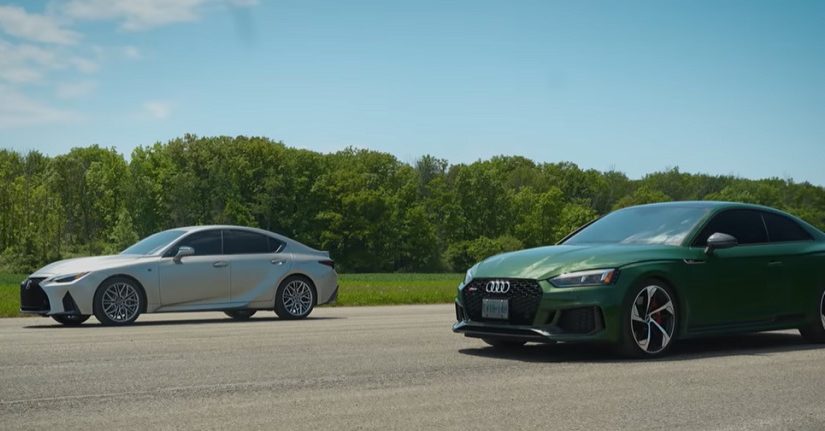 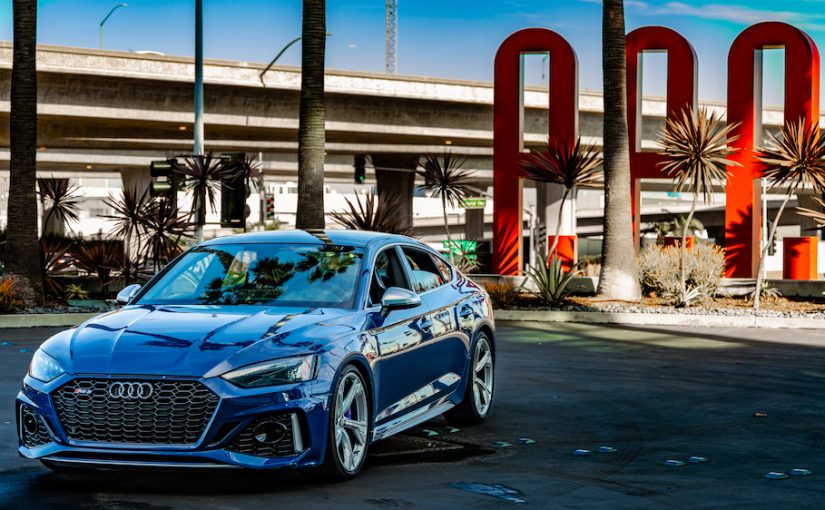 Refreshed for 2021, Audi regales its RS 5 Sportback as the Swiss Army knife of premium sports sedans. Wider and meaner looking than the A5 and S5, the flagship RS 5 Sportback retains coupe styling while adding an extra set of doors and a hatchback. Performance, meet practicality. As a mid-level RS model, power is a respectable 444hp and 442 lb.-ft. of peak torque. A number that won’t win you any bragging rights these days, but still faster to 60 than most American muscle cars.

And, wow, does it launch hard.

In short, with blistering acceleration, nimble driving dynamics, seating for four adults, and a sumptuous interior, the RS 5 Sportback is one of the most well-rounded vehicles you could drive today. A daily driver with track toy cred, so to speak. But after spending a week with our loaner, I came away unable to fully recommend one. Here’s why… In automobile review circles, OEMs tend to send journalists highly spec’d models and/or special editions. To judge the RS 5, Audi sent us a 1 of 100 Audi RS 5 Sportback Ascari Launch Edition which MSRPs at $96,945. This was for the 2021 model year, by the way, and as far as I can tell, 2022s will be virtually identical save for the availability of the launch editions

What do YOU think about the RS 5 Sportback?
Click HERE to join the discussion on our forum!

The Audi RS 5 Sportback starts at $75,400. Under the hood, Audi stuffed a 2.9L V6 Biturbo engine that routes its 444 ponies to all four wheels with an 8-speed Tiptronic transmission. (Quatttro? Always.) Outside, the RS model is more menacing and muscular, adding widened fender arches and more aggressive angles than the A5 and S5. Inside, the RS 5 will look familiar to anyone who’s seen an Audi lately. Sport seats come wrapped in fine Napa leather with honeycomb stitching. The heart of the infotainment system is a Bang & Olufsen 3D stereo with wireless Apple Car Play (and Android Auto) that delivers rich engaging music across a wide band of frequencies. There’s also a front USB-A charging point, a USB-C charging port and wireless charging pad in the center console, and two USB-A ports for rear passengers.

To this, the Ascari Launch Edition costs $20,500 and adds Overall, I’m a big fan of Audi’s current design language, especially as it applies to S and RS models. The RS 5 Sportback looks cool as hell. And yet, maybe because Audis are so ubiquitous in Los Angeles, it retains a certain sleeper status. Ascari blue metallic paint stuns and shimmers, shifting ever so slightly to purple at certain angles. Paired with the matte aluminum sill and forged aluminum wheels, the launch edition looks a bit like an Iron Man Transformer (RIP Tony Stark).

Dropping in behind the wheel, the Audi RS 5 Sportback offers thrilling acceleration, nimble turning, and insanely good ceramic brakes. At this power level, you’ve got enough juice to get a few tickets, but not enough to overpower the chassis, which makes it fun in almost every scenario. Sure, the steering feels numb, but it turns in well and the suspension remains compliant and comfortable, even in its stiffest mode. To say the RS 5 feels lighter than its 4,000-ish pounds is a testament to Audi engineering.

And, yet, despite being able to launch hard and play in the canyons, it’s a shockingly practical vehicle. Coupe styling with four doors and room for four adults. A rear hatch that makes loading luggage and packages easier than most sedans. And a humble daily driver demeanor able to cloak the beast within. In short, Audi’s right. It’s a Swiss Army knife. It’s one of the best daily driver / weekend toys you could buy. Well, except for one thing… Though naturally biased towards various V8, 10, and 12 engines, this 2.9L sixer absolutely screams in a way that captures my heart. Rev this Biturbo during a long pull under a tunnel and it transports the driver directly onto a race track.

Then you hear it shift… And a sound emerges that (almost) makes me loathe the whole experience.

Imagine a burble tune that, upon shifting, unleashes a sound resembling human flatulence as amplified by a blown-out speaker. I wish I was kidding and feel free to disagree, of course. But, in an otherwise spectacular sedan, the back-end of the car butt-rumbles with every gear change. Upshift, downshift, dynamic mode, comfort, all of it.

To my layman’s ears, it seems almost like the idea was to deepen the tonal experience. But the resulting resonance rattles the car in a way I couldn’t enjoy or ignore (unless I was turning up that killer Bang and Olafson 3D stereo). Again, maybe it’s just me, but, as best as I can describe it, that was my experience. Separate from the exhaust, which you can lock into comfort (quiet) mode for road trips to avoid drone, I was also shocked by the RS 5 Sportback’s elevated in-cabin road noise. Maybe it’s the Pirelli P-Zero tires, but around the Los Angeles area, with our miles of concrete slabs, the RS 5’s cabin was as loud as my 2013 Boss 302, a pony not exactly known for sound deadening. In Audi’s mid-sized sedan pack, the RS 5 and RS 5 Sportback are Alphas. Decked out in Ascari blue paint with matte aluminum trim, it looks muscular and bold while staying very much under the radar. Despite weighing 4,000 pounds, the car feels light and nimble. And the twin-turbo V6 hits hard with a powerband that feels a little dangerous, but not crazy. Sure, it’s not a V8 and the steering is a little numb and light at times. But the RS 5 Sportback dances between thrilling and mundane as needed. My only real gripes are the pricing and the exhaust resonance. As a 1 of 100 limited edition, perhaps it’s worth $100 grand, but I’d argue there are much better sedans at this price (the CT5 V Blackwing, perhaps). Then again, you could also spec out an RS 5 in the $80,000 range where it makes a little more sense.

In that scenario, maybe there’s an aftermarket exhaust that would tame the least flattering vibrations. Because the rest of the RS 5 experience is objectively impressive. Audi calls it a Swiss Army knife of a car and I very much agree… as long as you enjoy (or, at least, don’t mind) the vehicle’s tonal qualities.