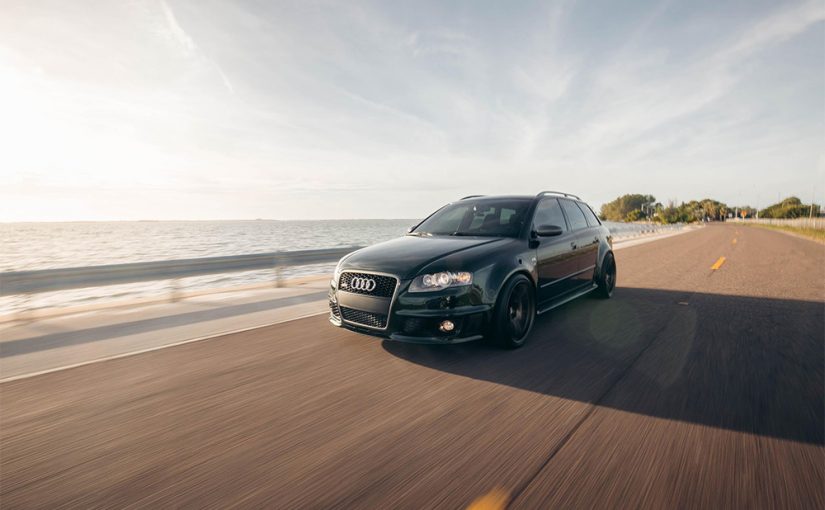 Inside and out, this B7 Avant is a full-fledge RS4 clone. This Cars and Bids auction is the closest you’ll get to a B7 RS4 for a decade!

The B7 Audi RS4 Avant is an iconic staple of the fearsome four rings’ timeline. What’s not to love? A six-speed manual transmission and a 4.2-liter V8 that makes 420 horsepower and 317 pound-feet of torque.  Couple that with the practicalities of a wagon and Audi’s legendary Quattro all-wheel-drive system, and you’ve got yourself a winner. Come to think of it, though; there is one thing we don’t love about it. See, Audi never sold the B7 RS4 in the US. We’re sure you’re aware, and we promise this article’s point is not simply to add salt to that open wound. Instead, we have great news. Right now, there’s a chance for US Audi enthusiasts to get an authentic taste of the B7 RS4 lifestyle. Furthermore, this car is 100% US legal and ready to rock.

This 2008 Audi S4 Avant is currently listed on Cars and Bids. However, this particular wagon is a whole lot more than an S4. This car is a meticulous recreation of an RS4. It has a full drivetrain swap, meaning instead of the standard affair S4 V8 engine with 340 horsepower, it has an authentic RS4 engine making the full-fledged 420 horsepower. It doesn’t stop at just the drivetrain, either. This thing has hours and hours of love and care put into it. As such, though, it’s not going to come cheap. At the time of writing, this auction has five days remaining and already carries a bid of over $50,000. The RS4 Conversion Doesn’t Stop at the engine

While the drivetrain swap in itself is impressive, it’s far from telling the whole story of this conversion. If you open the doors, you’ll find that this car also has a full-blown RS4 interior swap. Of course, this includes the gorgeous and sporty Euro-spec leather bucket seats. Heated, of course. Additionally, it has Euro-spec RS4 door cards, a TTRS flat-bottom steering wheel, SRP pedals, and a weighted shift knob. Widebody to Complete the Look

Perhaps the most selling part of this conversion is the widebody conversion. If we hadn’t been told it wasn’t a legitimate RS4 (and we didn’t read the fantastic “RSFAUX” license plates), we would be at a loss for how this car is in the US. It really is that convincing.

Tying together the whole look is a full-color change to Cambridge Green Pearl, Euro-spec head and taillights, a German-spec Avant rear bumper, and a shining set of gold Work Emotion wheels.

The only slight hang-ups some potential buyers may have are that the Carfax report shows a minor-damage front-end collision in 2014 and the fact that the RS4 cluster swap puts the actual mileage of this vehicle up in the air. Ultimately, this is a rare opportunity to own a car in the US that meets the specs of one of the many cool cars we never got in our market. Though we finally get a taste of the RS Avant life thanks to the RS6, we are still missing out on plenty of awesome RS Avant cars that are not yet legal. Now, you’ve got a chance o experience it. Unfortunately, though, it’s likely not going to come cheap.

We’ll certainly be watching this auction to see the final hammer price! 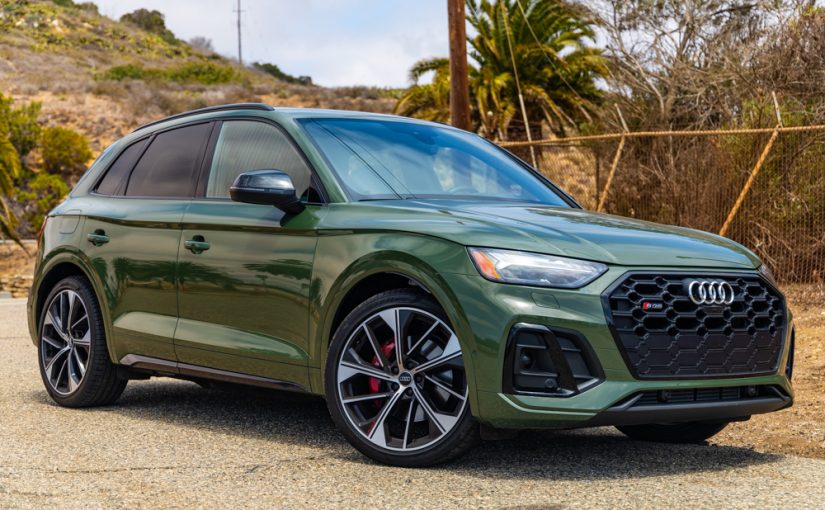 The Audi SQ5 jams the power and handling dynamics of the S5 and S4 into the taller Q5 platform. It’s a total blast, but is it worth $72,000?

It ain’t what you call cheap, staring over $50,000 and as-tested at around $72 grand, but it may be one of the best all-around family vehicles on the market for enthusiasts who know that life’s too short to drive boring. (#NoMinivans)

Is the SQ5 right for you? Read on! Let’s back up and first define the Q5 series as a whole. Recently refreshed, the mid-sized luxury Q5 is available with two engine options, three trim levels (Premium, Premium Plus, and Prestige), and two body styles (SUV and Sportback). The entry-level engine is a 16-valve turbocharged 2.0L four-cylinder making 261 HP and 273 lb-ft of torque. This configuration’s good for a 5.7-second 0-60 run. Or you can opt for the Hybrid system, which boosts the 2.0L up to 362-hp and 369 lb-ft of torque. This drops 0-60 runs down to 5-seconds, but it’s the heaviest of the bunch. Chrome reduction for the win!

Stepping up the ladder, we have the sporty SQ5.

There are other variances we could discuss, but the quick version is that the Q5 is more luxury and comfort where the SQ5 adds performance driving dynamics and sportier visuals to the equation. The Audi eye SEES ALL!

Toss in destination and delivery and our MSRP hits $71,790. What do YOU think of the Audi SQ5?
Let us know HERE in the forums!!! Lookin’ mean and green out front.

In and of itself, the SQ5 remains relatively faithful to its Q5 cousins, visually. It’s a chunky little SUV that’s been smoothed and carved away from the days of boxes on wheels. In short, it’s fine.

But add the optional Black optic package and larger wheels and suddenly the SQ5 stands out a little more from the pack. More muscular. More menacing. It’s not loud, mind you. But reducing the shiny bits draws eyes more to the SUV’s hips and curves and shiny red brake calipers. Four of these things are not real…

The other standout feature on our loaner is the paint. District Green Metallic is a bit of a chameleon. At night and under a cloudy sky, it looks a bit like an aftermarket wrap. Some type of military-style green that’s not quite shiny and not quite flat. (Think a green version of Nardo Grey.) But when the sun shines, District Green Metallic reveals its true nature — a gold metallic flake that shines and shimmers.

It’s a bit love-it-or-hate-it in photos. But in person, it’s a big win. At least for me. Lose yourself inside the flakes of district green metallic.

In terms of negatives, I’m not a fan of the fake quad-tip exhaust tips — as in they are connected to no part of the exhaust — even though they look sporty.

Overall the SQ5 is a bit of a sleeper, aesthetically. But as configured, it’s a sharp SUV that looks terrific, even if it blends in with almost every other Audi product. Where the rubber meets the road. Literally.

In a world where sports cars routinely run to 60 in under four or three seconds, the SQ5 ain’t gonna win you any bragging rights. Still, its power-to-weight ratio delivers a relatively thrilling experience. Especially for an SUV.

Mash the pedal to the ground and the SQ5 leaps forward. Turbocharged torque hits hard and races you up to illegal speeds with only a touch of torque steer. Toss the SQ5 into a corner and it’s wonderfully balanced in its lowest air suspension modes. Speaking of which, the SQ5’s suspension is terrific — both tight and sporty in the corners, but able to mask all but the harshest bumps. And, if you’re looking to do some light off-roading, you can raise up the SQ5, which only adds to the sensation of driving on a pillow. Forget what Audi you’re driving? No problem. Just look out back.

As I said earlier, the SQ5 drives very much like a sports car but sacrifices none of the comforts. And with this power level, it’s a vehicle where you can enjoy its abilities at a full ten-tenths. Which of course encourages you to find its limits.

Overall, it’s a joy to drive, but there are two downsides.

As with most turbocharged engines, this 3.0L V6 dies out a little early in the revs, which makes the SQ5 feel quick off the line when the torque hits, but slower at highway speeds. Further, the SQ5’s transmission isn’t the quickest to downshift. Which, when coupled with the engine’s turbo lag, can feel like two back-to-back power-kicks at some speeds. Cursed be these inferior summer tires! (<– Opinion based on personal experience.)

The other thing I’d like to see is Audi dumping the Pirelli summer tires on this particular package. Taking the SQ5 around a tight corkscrew freeway onramp, I found the squealing edge of the Pirellis’ grip, something I never feel when driving Michelin Pilot Sport 4S tires at similar speeds.

Overall, though, the SQ5 is a total blast. And equally at home commuting as it is playing in the twisties. Is your leather from Napa or Sonoma? And what’s the vintage?

I’d venture to say that, after its all-wheel-drive systems, Audi might be best known for its quality interiors. And the SQ5 is no different. The optional fine Napa leather seating wraps around perfectly bolstered heated sport buckets. Rear seating includes just enough leg and headroom for taller passengers, although not as much as a similarly sized EV crossover like the Mustang Mach E. Touch surfaces and materials aren’t the fanciest Audi offers, but they’re very good overall.

Click on any of these photos to see the larger file!

In the tech department, Audi’s gauges and infotainment touchcreens are sharp, clear, and snappy to operate. And the upgraded Prestige stereo system sounds quite good as well. But I don’t love the way Audi organizes the system’s menu systems and it would be nice to see wireless Apple CarPlay at this price point. I was also a bit surprised to see cooled front seats missing from a $72,000 vehicle. But they are available as part of a $600 package that also includes window shades. Lastly, the vehicle’s center console layout is a bit odd to my tastes. There are several small cubbies that would work well for a phone, but don’t quite fit them. And trying to use the cup holders with the phone charger and the armrest is a bit of a challenge. Minor quibbles, of course.

Overall, Audi’s interiors are generally excellent, and few nitpicks aside, this one’s no different.

Who Should Buy an Audi SQ5 Fun and sporty, but is it large enough for your lifestyle?

Is the Audi SQ5 right for your lifestyle? That depends, of course. If you’re into sports cars, the SQ5 isn’t going to blow you away. This isn’t a full RS model, after all. Nor is the SQ5 for anyone who needs a larger SUV for families with more than four people or lots of cargo.

Instead, the SQ5 finds a happy middle ground. Perfect for smaller families. An amazingly comfortable commuter. And all the fun-factor of the S4 and S5 with a little extra cargo room in terms of overall value. The 3.0L turbo V6 provides a lot of torque and smiles per gallon with an adjustable, tight suspension customizable to your tastes and needs. Picking up the kids. Running to the Home Depot. Roaring through the canyons.

You name it and the Audi SQ5 is a total blast.

But if you prefer extra capacity to sportiness, check out the Q7, which also offers this 3.0L turbo V6 along with three-row seating. Cheers!