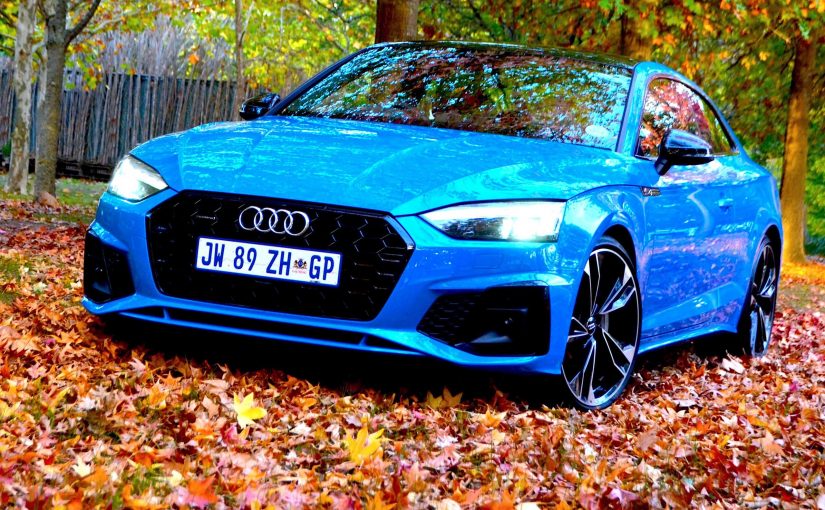 Exorcising Myths — Splendid Turbodiesel is Surely the Pick of Audi’s A5 Bunch (Sorry, US buyers.)

Before we dive into the Audi A5 TDI, let’s talk about good ole Dieselgate. That scandal back when VW cheated emissions on its four-cylinder and V6 turbodiesels in most VWs, Porsches, and Audis an effort to dodge carbon tax breaks.

(They say in racing, that you’re only a cheat if you are caught cheating. Well guess what?)

The VW Group ultimately coughed up $15 billion in fines, among other penalties for its carbon sins. And it’s been doing triple backward somersaults ever since in its efforts to atone. VW promises an all-electric future, has exited combustion motorsports and changed its famous VW logo in deference to its guilt-adopted clean persona. Hell, the US branch even cocked up its April fool’s joke when it released that Voltswagen clanger a few days too soon!

But VW Group Diesel Cars are Back

It’s in the context of an all-electric future when this splendid sky turquoise Audi A5 cropped up for test. Strolling around the back, we were astonished to discover that it’s a 40 TDI version. The diesel may not be on the Audi US A5 range, but it certainly is relevant. Set apart by a ‘tauter, more powerful’ look, the latest A5 is highlighted by a broader, flatter chrome-framed titanium black single Audi trademark grill. And this chunkier S-Line has cool optional 19-inch S contrast wheels.

And it got better. Within a few minutes of taking the wheel, we were mesmerized. Agile yet comfortable, this is a very nice car to drive. It doesn’t feel like a diesel engine. And its diesel torque is beneficial to every aspect of its envelope, making it so very easy to drive, too. It’s great on the open road, where that torquey demeanor would make you almost swear that you’re pedaling a S5.

Audi’s A5 TDI is a Specialist Driving Scalpel Braking is secure, it turns in beautifully, follows though marvelously, with an aplomb that enhances more confidence at every turn. A little hard on the road in regular driving, that’s all very quickly forgotten. This engine, Audi quattro drive, and a fine chassis conspire to deliver a specialist driving scalpel. There’s no diesel clatter — the engine note is great and the cabin silent. Best of all was a 500-mile range with a few fuel gauge segments already accounted for.

All that happens in a sumptuous, luxurious, and efficient style. Audi’s A5 has typically great cabin that makes a few good haptic touch MMI infotainment improvements to enhance ease of use. The highly connected system has smartphone logic and feel and cleaner graphics via an MIB 3 Communication box with Apple CarPlay and Android Auto smartphone mirroring, free-text input search and natural-language voice control.

Audi A5 TDI Has a Brilliant Virtual Cockpit Most of that is also controllable via the A5’s chunky multifunction steering wheel, which also selects the brilliant full-HD display Audi virtual cockpit’s three instrumentation views complimented by a head-up display. Our A5 also packed an optional Audi phone box and splendid Bang & Olufsen Premium Sound.

Audi connect including roadside and emergency assistance is however standard. This crucial piece of fresh motoring technology likely saved the life of a friend. He was unfortunate enough to recently suffer a violent crash. Dazed and hurt, he was shocked to hear someone asking whether he was OK, within seconds of impact. It was the response center communicating via the stricken car’s audio system. His cry for help and the urgent response to that call probably saved his life.

But the most amazing aspect of this particular A5, is how brilliantly it merges a fine Audi quattro grand tourer with a brilliant turbodiesel engine. Not surprisingly considering my introduction above, besides appearing in the price list, Audi’s A5 press release late last year made scant mention of this model. Which is a pity.

Because after driving it, I think it’s the pick of the bunch.

A Hiatus of Development Worst of all, is that while this 188 hp 295 lb.-ft. engine has now made huge strides since the embarrassment its predecessor caused. When its makers cheated its carbon credentials. So future diesel development is stymied by the rush to electrify and satisfy the wan of a misguided green front. Which I believe misses the point completely.

One day, when all is said and done, I’m convinced that the world will come to rue turbodiesel technology’s hiatus of development. Its engine may very well have been the seed of much that carbon activism in the first place. But if this little secret is anything to go by, the car industry and its carbon controllers have clearly missed a trick.

This 40 TDI is the pick of the Audi A5 bunch. The irony just in that, is palpably embarrassing…