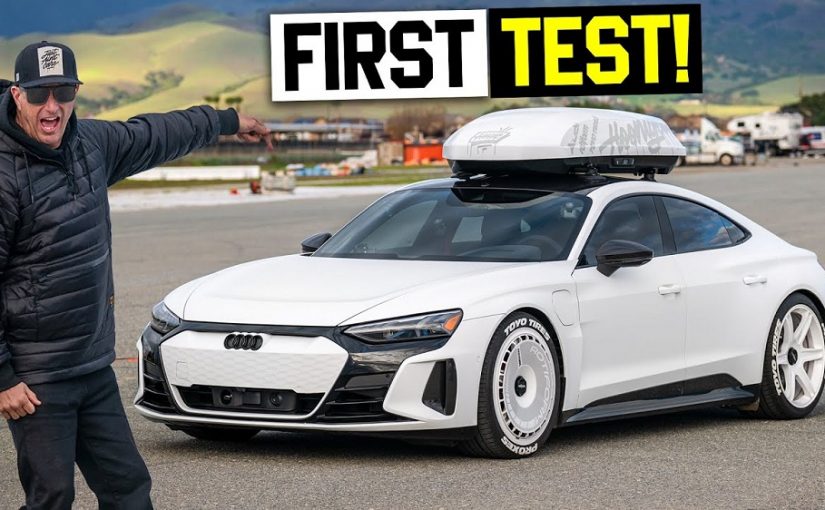 Along with some “scientific tests” Ken Block takes a few members of his video production team for a ride in his new daily driver.

Last week, we got our first look at Ken Block’s new daily driver, a custom Audi RS e-tron GT with 637 horsepower and 830 lb-ft of torque on tap. During the walk-around video with producer Neil Cole, we got a great look the the Rotiform Aerodisc wheels and other details of the flat-white green machine. But what we didn’t see was how the car actually performs — and that’s exactly what the latest video from the gymkhana master shows. Spoiler alert: it’s wicked quick.

To demonstrate how regular folks — and not champion rally drivers — respond to the Audi’s insane level of performance, Block takes a few members of his video production team for a ride. And as you’d expect, the results are hilarious. Because since the e-tron is essentially silent, the folks in the passenger seat are caught completely off guard. There isn’t even a whisper of warning before they’re  hurtling down the track.  So if you weren’t already convinced? It looks like working with Ken Block is a blast.

But my favorite part of the video is where the ace driver explains just how different the power delivery of a conventional powertrain and an electric one actually is. In describing the launch of an R8, Block touches on just how trained we are to take cues from the engine and the gearbox, and that even split-second shifts provide an opportunity to catch your breath, so to speak. In an electric car, however, it’s all thrust, all the time, and constant silent progress can make it hard to understand how fast you’re going.

As someone who’s just starting to dip my toes into the world of fast electric cars, I can attest it’s a weird, weird feeling. That said? It’s also novel enough that even if you love the sound of a high-performance engine wailing like a scorned banshee, you’re likely to find the linear power delivery completely captivating. Watch the video to see the results of the “scientific tests,” and stay tuned for Electrikana — it’s sure to be one hell of a video.