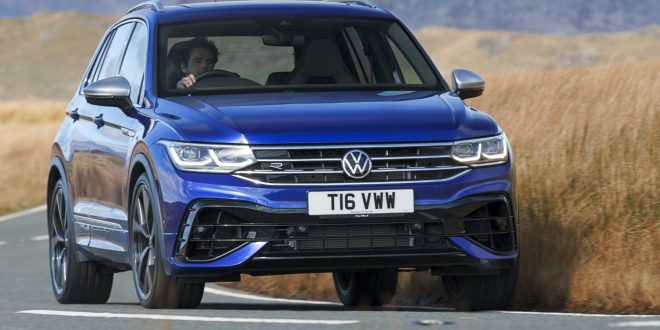 When you’re driving an ever-increasing amount of hybrid and electric vehicles, it’s refreshing to review a car with no eco pretensions – just a good, old-school car aimed at petrolheads.

To be exact, the Tiguan R is the performance version of Volkswagen’s mid-sized SUV that’s attractive, practical, well-equipped, fully connected and apparently a hit on the school run.

Presumably, VW wants to repeat the success of the Golf R, which is still a benchmark for hot hatches. If so, it very nearly succeeds because the Tiguan has never been so engaging to drive.

It’s suitably swift with a 0-62mph time of just 4.9 seconds, while top speed is an electronically limited 155mph.

As you’d expect, the Tiguan’s eco credentials aren’t quite so hot. Fuel consumption is 28.5 mpg, while CO2 emissions are up to 225g/km.

If you behave yourself behind the wheel, then 30mpg is possible, but it’s hard to resist having fun in the R, while ‘Sport’ as the default drive mode doesn’t help!

So, what do you get for your £46,220? For starters, it’s available in trademark Lapiz Blue paint (unique to R models).

Inside, there are supportive heated sports seats, a new steering wheel with gear-shift paddles, multi-coloured mood lighting, R badging and an ‘R’ mode button which lets you quickly engage the sportiest driving mode without having to access the infotainment screen (which sadly incorporates the new touch sensitive climate control panel first seen on the latest Golf).

Other than that, it’s much the same as a regular Tiguan, which means it’s generously equipped, spacious front and back, plus a healthy 615 litres of storage capacity (1,655 with the rear seats folded).

Set off and the first thing you notice is the engine note, which is augmented via the audio system. It certainly sounds the part in the faster drive modes, but if you’re not a fan of fake noise, then there is a setting to switch it to ‘Pure’.

Slightly lower and stiffer than a regular Tiguan, it feels planted on the road, hides its size well and body lean is kept to a minimum in faster corners.

The engine is equally impressive. Responsive and smooth with plenty of torque, it’s possible to squeeze out some entertaining pops and crackles when down-changing in the faster drive modes (as well as the road-going Comfort, Sport, Race and Individual modes, there are also Off-Road and Off-Road Individual modes).

The DSG box is as efficient as ever, pumping through the gears, while the new torque vectoring differential (nicked from the Golf R) helps the four-wheel drive system send power to the wheels that have the most grip, enabling you to make tighter turns at speed.

In fact, grip and traction on more challenging roads is superb, while the steering is light and accurate.

Ultimately, it’s not as nimble and engaging as a Golf R, but Volkswagen has made a great attempt to add some dynamism to the Tiguan SUV – its biggest global seller.

Verdict: The Volkswagen Tiguan R is a mid-sized family crossover with serious attitude, boasting badge appeal, performance and practicality. If you can live with the ticket price and relatively high running costs, it should definitely be on your hot SUV shortlist.